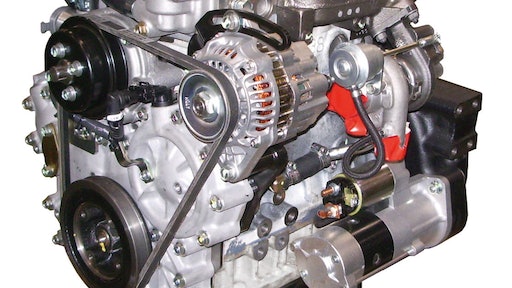 Mitsubishi Heavy Industries, Ltd. (MHI) has announced its production schedule for three new small diesel engines in response to approaching EPA Tier 4 regulations. The D03CJ, D04CJ and D04EG models provide regulation compliant solutions in the 25-hp to 99-hp output range. The Tier 4-compliant D03CJ and D04CJ will begin production in 2013, whereas the Tier 4 interim D04EG is currently available, and the Tier 4 final version will be available in 2015.

Both engines feature an optimized common rail system with a diesel particulate filter (DPF) and diesel oxidation catalyst (DOC) for Tier 4 compliance. Common MHI goals when developing new engines are to achieve a more compact design without sacrificing power, while also lowering fuel consumption. Appropriately, compared to the previous Tier 3-compliant models being replaced, the D03CJ and D04CJ offer a smaller displacement, while output has been increased. Fuel efficiency is also 16% better than the previous engines.

The Tier 4 interim, four-cylinder D04EG (3.331L) delivers a maximum output of 99 hp and a maximum torque of 375 Nm at 1,600 rpm. The engine utilizes a common rail system including an exhaust gas recirculation (EGR) system and a DPF and DOC for Tier 4 interim compliance. Compared with the Tier 3 engine it replaces, the D04EG offers 12% improved fuel economy.

To achieve Tier 4 final compliance in the power range of 76 hp to 99 hp, MHI’s current plan is to incorporate a selective catalytic reduction (SCR) system.

All three engine models are equipped with high-performance turbochargers manufactured at the same plant that the engines are produced. This closer proximity design and production results in the ideal turbocharger match for each engine, maximizing overall performance. Combined with the new optimized common rail system, the engines achieve an enhanced power density that increases output up to 50% when compared with the previous Tier 3-compliant engines.

September 19, 2012
Latest in Other Components