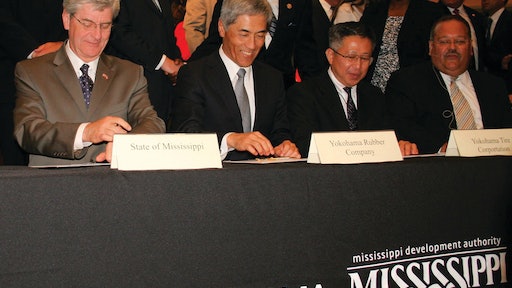 Yokohama Tire Corporation (YTC) has signed an agreement to build a commercial truck tire plant in West Point, MS. The facility, which is expected to produce one million tires starting in 2015, will have an initial capital investment of $300 million and potential plant expansions could reach up to four times the original employment and investment levels.

“This is a historic day for Yokohama,” said Hikomitsu Noji, president and representative director of The Yokohama Rubber Co., Ltd., YTC’s parent company in Japan. “Since our entry into the U.S. market over 40 years ago, along with the subsequent acquisition of our plant in Salem, VA, in the 1980s, Yokohama has been on a continual growth. Now we will build a factory in the United States for the first time. It re-affirms our commitment to the North American market and to the continued mutual success of Yokohama and its business partner – our dealers.”

Noji, along with Gov. Phil Bryant and officials from the state, participated in a signing ceremony at the West Point Ritz near the site of the future company plant, about 149 miles from Jackson, MS, the state capitol.

The plant will be built on over 500 acres of land with construction expected to begin in September and completion two years later. Yokohama expects to hire approximately 500 employees to work at the facility.

April 8, 2008
Latest in Other Components