Highly modern logistics facility will enable output of up to 3,500 spare parts per hour. 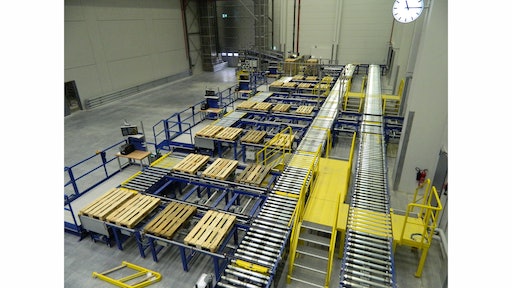 In July 2013, the Liebherr Group began setup of a new logistics center in Oberopfingen by Kirchdorf an der Iller (Baden-Württemberg), Germany. Starting in early 2015, it will serve as the base for supplying spare parts for Liebherr earthmoving equipment globally, and long term will be home to spare parts logistics for additional types of construction equipment. The investment value for the first stage of construction is in excess of 115 million euros.

The first phase of building will be finalized at the end of 2014. This construction phase covers, among other things, site development, the erection of a logistics warehouse over an area of approximately 47,000 m², as well as the construction of a separate office building. Commissioning of the logistics area will take place in the first quarter of 2015.

In the final extension phase, a site measuring 360,000 m², a warehouse space of about 170,000 m² and an office building covering 4,500 m² will be available. A future concept specifically planned for spare parts logistics makes allowance for an additional space of 47,000 m2 directly adjacent to the logistics center to mirror the new logistics warehouse, securing optimal scalability at this site for years to come.

The site in the municipality of Kirchdorf an der Iller to the south of the suburb Oberopfingen offers direct access to the federal motorway 7 via highway 312. Moreover, the site is very central in relation to the large Liebherr production facilities for construction equipment in South Germany, Austria and France. Further expansion of the available area was also a contributing factor during selection of the new site.

Plenty of space for spare parts

The warehouse completed during the first construction phase offers a total of 46,800 m² for spare parts. For efficient parts storage, an automatic 36 m high shelving system was erected in nine aisles with 60,390 pallet spaces. An energy-efficient pallet loading and unloading device is used to pick and place the spare parts.

With an additional 29,380 manual pallet spaces, the small parts warehouse ¬- with a total of 122,000 box spaces - forms the core element of the intralogistics center. This automatic box warehouse with eight aisles across and eight aisles down has a special modular layout that provides a high level of safety against failure as well as maximum performance. Initially, the box warehouse will have an output of 1,200 boxes per hour to the eight commissioning areas attached to it. When at its full potential with 24 commissioning areas, the output will be in excess of 3,500 spare parts per hour.

In designing the new facility, special attention was paid by the Liebherr logistics technicians from the dedicated service organization to shorten order processing times. This facilitates the reliable dispatch of goods on the same day for many European countries even if the order is received late from the sales organizations. Other service features are the use of modern picking and placing methods such as FiFo (First-in-First-out) and the batch-specific storage of all delivery positions.

The first stage toward productive operation of the new logistics center starts with implementation. Primarily, the five external warehouses that currently exist will be consolidated in the manual warehouse area of the new site. Shutting down the external warehouses will bring about an immediate improvement in the dispatch of spare parts due to the reduction in movements. This process will be completed by the end of November 2014.

From November 2014 until March 2015 (expected), the spare parts operations will then move from its current warehouse site to the new logistics center in Oberopfingen. Through the end of 2014, the main site for international dispatch of spare parts will remain at the existing warehouse in Kirchdorf. Starting in 2015, the main dispatch site will change to the new logistics center.

By March 2015, reorganization of the parts arrangement, involving more than 100,000 different spare parts, will be complete. The main objective during the move as well as during start-up in the new logistics center will be the smooth processing of the 1,600 spare parts orders received on a daily basis - with 6,000 order positions - to global customers without errors.