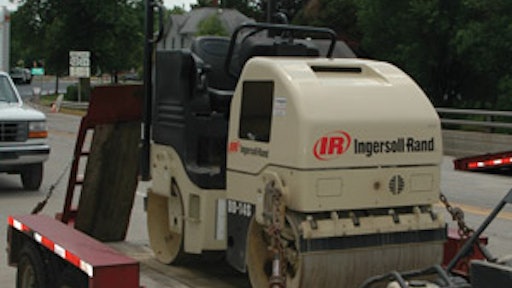 New rules took effect in April legalizing the use of automatic hydraulic inertia brake systems (surge brakes) on light- and medium-duty trailers within certain limits, even in commercial applications. Previously, the U.S. Department of Transportation's Federal Motor Carrier Safety Administration (FMCSA) had issued guidance and regulatory interpretations that made surge brakes illegal for use in interstate commerce.

"FMCSA, in previous rulings, had declared that surge brakes were not actually brakes," says John McClelland, vice president for government affairs, American Rental Association (ARA). "They didn't meet the definition of what a brake is."

At issue was a requirement in Section 393.48 of the Motor Carrier Safety Regulations that motor vehicle brakes be operative at all times. A surge brake, which is operative only under certain preset conditions, would not be in compliance with this requirement. Surge brakes, in general, are only operative when vehicles are moving in the forward direction.

Section 393.49 also required a single valve to operate all brakes. Guidance on this issue stated that since surge brakes cannot keep the trailer brakes in the applied position, the brakes on the combination of vehicles are not under control of a single valve.

These rulings soon spread to the state level. "A bunch of states adopted the federal rules for interstate transport simply by referring to them in their statutes," says McClelland.

This essentially banned surge brakes in these states. The result was a patchwork of regulations that often allowed use of surge brake-equipped trailers by private individuals, while banning them from commercial use. Due to inconsistencies between local regulations, there was a great deal of confusion as to when and where surge brakes were legal.

The new rules eliminate this confusion by spelling out the conditions under which surge brakes can be used. For trailers with Gross Vehicle Weight Ratings (GVWRs) of less than 12,000 lbs., the regulation approves surge brake use for vehicle-to-trailer GVWR ratios of 1:1.175. For trailers between 12,000 and 20,000 lbs., the regulation approves use for vehicle-to-trailer GVWR ratios of 1:1.25.

A long time in coming
The ruling was a long time in the making. The movement to legalize surge brakes for commercial applications was spearheaded by the Surge Brake Coalition, a group founded in 1998 and made up of trailer manufacturers, parts suppliers, commercial users of surge-braked trailers, trailer rental companies and trade associations representing segments of the trailer business. The ARA was one of the leaders in the Coalition.

The Coalition argued that surge brakes provide a safe, practical braking system for CMV combinations, especially when the trailer is likely to be towed by a variety of vehicles. For some applications, such as rental, it is impractical and cost prohibitive to install or adapt an electric brake control system on every towing vehicle.

Surge brakes, on the other hand, activate automatically when the towing vehicle brakes are applied; adapt to the weight of the trailer load; have fewer components; and require less maintenance than trailers with electric brakes. The Coalition estimated that over 25% of the rental trailer fleet is equipped with surge brakes.

To demonstrate that surge brake-equipped trailers meet the safety performance requirements, tests were developed, then conducted by a test laboratory in 1999 and 2000. The tests covered combinations of representative towing vehicles and trailers widely available in the rental market. Three aspects of particular interest were straight-line braking, braking on a curve and brake-holding on a hill.

Twenty two towing vehicle and trailer combinations were evaluated. The tests concluded that surge brakes limited to the GVWR ratios listed have sufficient braking capability to comply with the agency's stopping requirements. There were no braking stability problems, and they were able to safely hold their position when stopped facing uphill on steep grades.

After collecting data from the tests and compiling arguments, a petition was drawn up by the Coalition to request the FMCSA re-evaluate its position on surge brakes. "We put that petition in February 28, 2001," recalls McClelland. "In some instances, the Coalition underestimated the amount of tenacity it would take to move the regulatory process forward."

Impact on contractors
The ability to now use surge brake-equipped trailers simplifies life for contractors. Electric brakes require specific brake controllers and electrical connectors on the trucks. Trying to pull multiple trailers with different trucks used to be a "crap shoot," especially when equipment was picked up at a rental center.

"It was often the case with customers that they would either have a brake actuator that would not fit up with the electric brake fittings on the trailer, or they just did not have them," says McClelland.

This created a major safety issue. "Many rental houses just said, 'We cannot send equipment out on trailers that don't have brakes,' " McClelland notes. This resulted is surge brake-equipped trailers being used in areas where they were not technically allowed.

David Manthei, vice president of operations at Towmaster Trailers, also cites the benefits of surge brakes in this situation. "When it comes to rental, not everyone has a vehicle equipped with a brake controller," he asserts. "The change to the FMCSA to allow surge brakes has helped us by allowing us to offer a 'universal' choice on our trailers for our rental dealerships. The advantage with surge brakes is that any vehicle rated for the trailer can use the trailer without having to install a brake controller."

Like many trailer manufacturers, Towmaster offers a choice in braking systems. "We allow our customers to decide the type of braking system they need or want on their trailers," says Manthei. "We offered surge brakes in the past, before the regulation to disallow them, and we had negative feedback from some of our dealers when that happened. Now with the change, those who prefer to offer surge brakes can do so with our trailers."

One caution is that it often takes time for law enforcement personnel to become familiar with rule changes. "I can't imagine someone isn't going to get nailed by someone who isn't aware," says McClelland. To protect yourself, he advises carrying a copy of the new rules in your tow vehicle to show to anyone who is unfamiliar with the changes.

Why Technology Innovation is Critical in Countering Service Labor Shortage

We’re having a hard time hiring service techs, but we also benefit from new technologies that can make them three times as productive as they were 20 years ago
SmartEquip
July 31, 2019

TVH will now offer one-day ground service from the Portland location to all of Oregon and parts of Washington and Idaho
TVH Parts Americas
September 28, 2018

Typical parts made by 3D printing so far include parts of a cabin, plastic coverings and sections of air conditioning units
Volvo Construction Equipment
March 29, 2018

Available in 13 sizes and approved for use with compact track loaders
EarthForce
February 13, 2018

Most Caterpillar parts sales outside the US move through a Swiss subsidiary and after at least four investigations of the practice, Cat may still owe Uncle Sam $2B in back taxes
January 2, 2018

Caterpillar hopes to attract price-sensitive customers with Yellowmark parts developed with suppliers for fit and function but not the second-life expectation of Cat-branded parts
November 27, 2017