Company reaches a record 84,000 machines amid steady growth in most markets 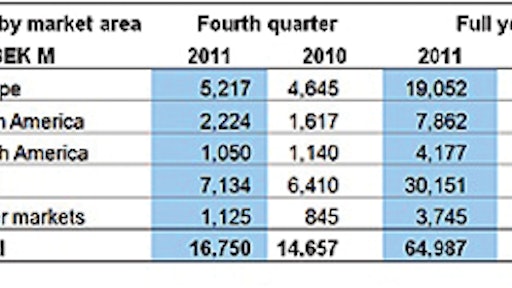 Maintaining its growth in the Chinese market, Volvo Construction Equipment ended a successful 2011 with a 14% increase in net sales in the fourth quarter, helping the company to a full year sales increase of 21%. Amid steady growth in most markets, the company ended 2011 with a strong order book and record sales of 84,000 machines.

Announcing its fourth quarter and full-year results, Volvo Construction Equipment (Volvo CE) reported unit sales up almost a third in 2011, amid positive sales trends in most markets, with the exception of China, which had a relatively weak fourth quarter. The company produced an all-time high of 84,000 machines during 2011 (up from 66,000 in 2010), and began 2012 with an order book 51% higher than at the same point in the preceding year.

Due to good momentum in most markets, the full-year figures were bolstered by a solid set of fourth quarter results. Net sales in the last three months were up 14% and amounted to SEK 16,750 M (SEK 14,657 M in 2010). When adjusted for changes in the exchange rates, net sales rose to 15%. Operating income saw a modest decrease in the quarter, at SEK 1,649 M, down from SEK 1,758 M in the same period in the previous year. Again, much of this decrease is accountable to currency issues, a factor that also weighed on operating margin, which at 9.8% was down from the 12% reported in the same period in 2010.