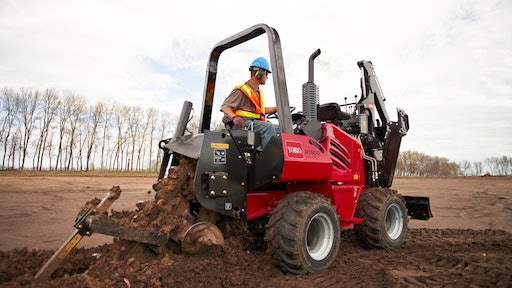 Rich Rodier, general manager of Toro's Siteworks division, says the incursion deep into key high-volume machines used in underground construction is an extension of the company's success with the Toro Dingo and its underground attachments. He credits the company's brand recognition and history of innovation and product durability as key points the company will use to penetrate the fiercely competitive market.

Toro's acquisition of Astec's light product line a supplied the new product lines, which are now all being built in Toro's Wisconsin plants with upgrades that came with engines compliant with U.S. EPA's Tier 4 emissions regulations.

Capable of installing casing from 24 to 84 in. in diameter and for pneumatic pipe bursting applications ranging from 15 to 36 in. in diameter
HammerHead Trenchless
February 19, 2018

The SRS with a steerable head is designed to navigate solid rock and difficult rock conditions
McLaughlin Mfg. Co.
March 30, 2017

Can replace 1/2- to 4-in. natural gas distribution pipe and may also be used to decommission inactive gas lines that will be left in the ground
HammerHead Trenchless
May 10, 2016

Capable of splitting and replacing plastic gas service and main lines from 1/2 to 4 in. in diameter
TT Technologies
August 22, 2015

The Digital HDD Jobsite has Arrived

InSite from Vermeer is a suite of software tools that makes directional drilling more productive.
August 17, 2015

Prairie Dog horizontal boring machines are available in eight models ranging from 22-lb. handheld machine for 2- to 4-in. holes up to heavy-duty 395-lb. machine for 3- to 28-in. holes over 200 ft. in length
Prairie Dog Boring Equipment
July 23, 2015

Delivers a pull of up to 3.75 tons for slitting plastic gas pipes from 1/2 to 2 in. in diameter
HammerHead Trenchless
January 30, 2015