In our first Construction Equipment Closeup, we take a look at the Barreto RTK stand-on track trencher, designed and built for greater productivity and return on investment. 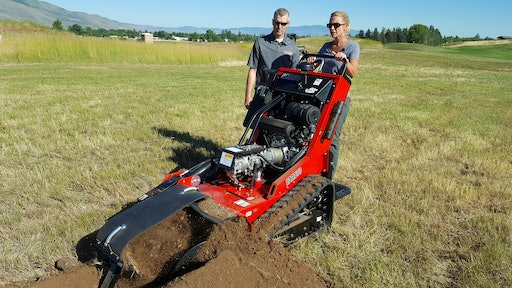 Editor's Note: Construction Equipment Closeup is a new feature on ForConstructionPros.com focused on what happens when editors go out in the field, operate equipment and report on the experience. Look for it also in the January/February issue of Rental magazine.

Operating a walk-behind trencher is no picnic. They steer like a dumpster and are prone to stalling when they encounter underground obstacles nobody can see. Simple in concept and remarkably adept at carving access into the ground, walk-behind trenchers nevertheless require a bit of finesse to operate efficiently, which can be a challenge for novice customers renting one for just a day.

In our personal experience with them, some recurring frustrations include frequent machine bucking as the boom is lowered into the ground, not being able to see what’s happening on the digging end of the machine, struggling with rocks and other obstructions in the soil, and sometimes confusing and unforgiving controls.

Still, these machines are usually reliable workhorses that get the job done. To that end, track trenchers are growing in popularity and these models offer many advantages over their wheeled brethren, including more usable power and improved stability. The question is, what features result in a significant improvement to productivity and ease of use? What are the design differences that make the biggest impact on walk-behind trencher operators?

We recently took a close look at the Barreto RTK stand-on track trencher to see how some of its unique features are changing the trenching game.

We’ve operated trenchers that use the standard walk-behind configuration. There’s nothing wrong with this design, but it doesn’t offer the vertically challenged user much in the way of visibility and frankly, it can encourage the operator to attempt to muscle the machine around when in fact, it’s best to just let it do the work.

The RTK stand-on track trencher is unique in that it features a fixed platform for the operator to stand on while operating. Not only does the platform increase overall safety, essentially taking the operator up and out of the way of the machine, we think it’s a game changer for novice operators because it vastly improves visibility to the working end of the machine. Being able to view the digging chain in action, and determine the actual depth of the boom, makes it easier to fine-tune controls for optimal productivity. You might also say the height advantage the platform offers provides operators (particularly the vertically challenged) with a small boost of confidence. It might not be technically necessary to see the business end of the machine while trenching, but we think being able to see the chain drive, the spoil pile and the angle of the boom greatly improves the user experience.

As mentioned earlier, trencher controls are critical to the user experience and this is where the RTK really shines. Barreto features a unique fine-tuning control adjustment that uses rod linkage instead of cables.

“On our tracked trenchers, we’ve redesigned the controls to make them easier to understand and operate. Fewer levers is the key,” says Tim Phelps, product manager with Barreto Mfg. “To achieve this, we’ve moved away from a cable actuated system to direct rod linkage. Eliminating the cables and going to rods allowed us to eliminate a clutch lever. Now the chain is engaged with just one hand, the same hand used for forward and reverse controls.”

Fewer levers goes a long way toward speeding the transition to real productivity for the novice operator, but it also just makes the experience more positive overall for even seasoned users.

In its ‘run’ position, the lever that engages the chain drive rests on the base of a handle the operator uses to steady themselves on the riding platform. The twin ground-drive levers are positioned in easy reach of that hand’s fingers. So to operate the RTK, the operator draws the chain-drive lever down and to the left with their right hand until it rests on the handle, and reaches forward with the right fingers to pull the track drives back toward the handle. Now the operator has a firm grasp on the handle, and is holding most of the controls in the working position. The left hand is free to control the boom angle and throttle.

The chain-drive lever can also reverse the digging chain. So when the chain hits a rock or other obstruction in the trench, releasing your right-hand grip stops the machine’s forward motion and the chain drive at once. And you can reverse the chain by throwing the drive control lever to the right. Returning it to the left to rest on the handle allows you to check if the trench is cleared, and it’s a natural motion to draw on the ground drives and continue.

To further improve the experience, Barreto includes the new Adjustable Trenching Control (ATC). It’s a lot of name for a pair of wingnut stops – one for each of the ground-drive levers. The payoff is that by turning the wing nuts, you adjust the ground-drive stops so that it’s easy to return to just the right amount of traction effort every time you start pulling trench. Adjusting the individual track controls allows the operator to keep their trench straight, or even maintain a gentle curve, in all conditions.

“Tracked machines with steering capabilities are one of the main trends we see,” says Phelps, noting that the RTK can actually trench on a curve. “Hydraulic steering, or skid-steer type steering, is improving the operator experience with walk-behind trenchers.”

It’s true, the skid-steer type steering capability makes a world of difference. It’s intuitive and responsive, but not so responsive that it’s unforgiving.

At just under 1,700 pounds, the RTK falls in the middle of its size class. Compared to wheeled machines, which typically weigh in at a few hundred pounds less than their tracked counterparts, the RTK is able to reduce impact on the operator and provide greater stability. Because of their larger footprint, track trenchers are also less invasive on the landscape and cross-trenching is made easier. By combining tracks with additional weight, the ability to keep the trench straight is greatly improved.

Today’s track trenchers with a 48-in. dig depth capacity range in weight from 1,250 to 2,100 pounds. This heft, coupled with a low center of gravity, offers a distinct advantage during operation, as the machines are less likely to buck, and can stay their course more effectively.

The RTK trencher offers a 7.1-in. wide track that creates 241 square inches of footprint on each side of the machine for increased traction on wet soil, clay, sand, or steep terrain. The result is 3.6 psi of impact on existing landscape, as the tracks absorb most of the abuse caused by rocks, roots, or other obstructions in the soil.

Phelps says Barreto trenchers also hold a greater volume of hydraulic fluid, which further increases the weight of the machine. “This means track to ground contact is greater, which helps with machine stability,” he explains.
Barreto offers a choice of a 20.8- or 22-horsepower Honda or 23-horsepower Briggs & Stratton engine, all of which are available or matched in competitive machines. But the scale of Barreto’s tracks and the weight of their machine gives the unit segment-expanding power.

“With the wheeled machines in the past, the tires were always spinning,” Phelps explains. “So it was harder to get the boom through the ground at anything deeper than 36 in.; [tracked machines have] allowed us to go as deep as 48 inches.”

Built with ROI in mind

User-friendliness is great and certainly adds to the bottom line through greater utilization, but return on investment is what really counts in the rental business, so Barreto made several design changes to the RTK tracked trencher intended for that very purpose:

Built With ROI in Mind

User-friendliness is great and certainly adds to the bottom line through greater utilization, but return on investment is what really counts in the rental business, so Barreto made several design changes to the RTK tracked trencher intended for that very purpose: