How to Match Air Compressor Selection to Your Pneumatic Tool Needs

Oversizing an air compressor can result in tool damage, while undersizing the compressor can lead to poor tool performance. Thus, when selecting a compressor to meet your specific jobsite needs, it's important to take into account the total cfm requirements for the tools to be powered, as well as their pressure (psi) levels as set by the manufacturer. 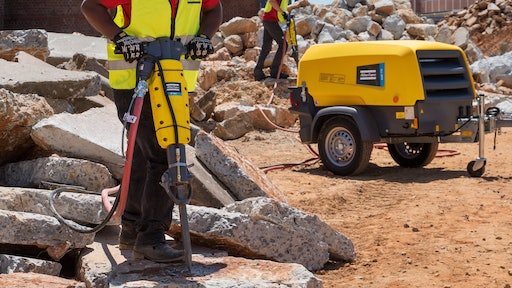 When selecting a compressor, first determine the cfm requirements of the tools you plan to use to avoid under- or oversizing the power unit.
Atlas Copco

Whether it's a small utility model, a mid-sized towable version or a large mountable unit, it's important to correctly size a compressor to the application.

"When you undersize a compressor, it takes more time to finish a task. You may have workers sitting idle waiting for enough air to be generated," says Peter Grimmer, GrimmerSchmidt. "When you oversize a compressor, you can also run into efficiency issues — you're simply spending more than you need to from an initial investment standpoint. You will also burn more fuel, and you will need larger equipment to move it from jobsite to jobsite."

What are your cfm requirements?

A compressor is usually sized according to the amount of air it can compress to 100 lb. per square inch (psi) in one minute. This is denoted in cubic feet per minute (cfm), says Chance Chartters, sales manager, Mobilair, Kaeser Compressors.

However, keep in mind that altitude can affect cfm ratings. "The higher the altitude, the thinner the air and the less cfm you can generate," Grimmer explains. "Manufacturers have charts available that will outline cfm ratings at higher altitudes. Refer to them if you're working above 8,000 ft."

The first step in determining the size of the compressor needed is to establish the cfm requirements of the tools you intend to use. This information is typically labeled on the tool, or can be found in the owner's manual. As a rule of thumb, a paving breaker's weight usually corresponds to the amount of cfm it requires. For example, a 90-lb. breaker requires approximately 90 cfm, a 60-lb. breaker requires approximately 60 cfm, etc.

"It's important to do some research before heading to the rental house," advises Grimmer. "Knowing the cfm requirement of your tools is key and will help you get into the right size of compressor."

Also determine if you will need to run more than one tool simultaneously. Some compressors have several outlets to power multiple tools.

"However, if a contractor purchased the same 185-cfm compressor to run small rivet busters, which usually require 45 to 50 cfm, or chipping hammers, which usually require 35 to 40 cfm, the compressor would be oversized and the contractor would waste both air and fuel," says Chartters. "Once the valve is open on the compressor, the engine is running, air is being compressed at full capacity and fuel is being consumed regardless of how much air the tool is using. With the instability in today's fuel markets, increasing environmental consciousness and the focus on improving operating costs, most contractors can't afford to waste fuel."

With that in mind, fuel efficiency is one area contractors should consider when trying to match a compressor to the application. "Most contractors require 8 to 10 hours of uninterrupted operation," says Chartters. "Some manufacturers accomplish this by including a larger gas tank. However, for the best air per fuel consumption ratios, look for compressors that pair oversized airends with motors turning at slower speeds - which also reduces noise levels."

Specific pressure levels for tools are usually set by the manufacturer at the factory (typically 90 psi). To avoid damage, you need to make sure you don't exceed these levels.

"Too much psi can damage the tool," states Cormac Kerins, product marketing manager, portable air division at Atlas Copco Power Technique. "You will replace the tool and tool bit much faster with too much psi. When a customer calls with a tool problem, the first thing we look for is if too much psi is being supplied."

Read next: Don't Blow It

Some tools, such as sand blasting equipment, may have psi levels of 150 psi and above, says Grimmer. "In this application, this higher psi will propel the media faster," he points out. "There is also a trend toward higher pressure tools in general, so contractors can get more work done faster. It's important to be aware of the pressure rating of your tools."

Two power sources in one

Generators are often needed on jobsites to provide electrical power for lighting or non-air or hydraulic-powered equipment, such as pumps, drills or welders. Compressor/generator systems eliminate the need for multiple power sources. Typically, a second V-belt pulley or gear is added to the compressor's engine drive shaft to power the generator.

"Combining these two important utilities into one package has many advantages and has resulted in increased popularity," says Chartters.

Before investing in such a package, evaluate both the compressor and generator for features to ensure optimum performance and value.

"When considering a compressor and generator combination, make sure the engine is powerful enough to operate the compressor and generator at full output," says Chartters. "Significantly reducing the output of either electrical power or compressed air during simultaneous operation is counterproductive. The control system must ensure that the engine delivers constant speed during generator operation to avoid frequency and voltage fluctuation, which could severely damage connected equipment such as pumps or drills."

*This article was originally published in 2009