Various choices are available for your onboard air supply. 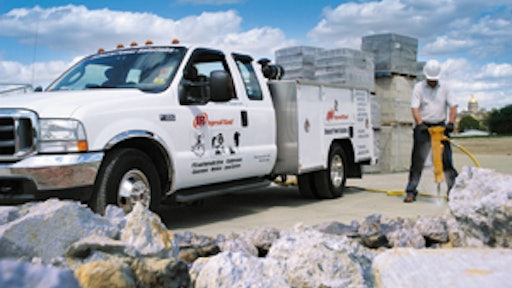 Used for everything from inflating tires to powering pneumatic tools, compressed air can be invaluable on many jobsites. It can also be invaluable if your applications allow you to mount the compressed air supply onto your mechanics truck to free up the hitch for towing other equipment, or increase mobility by eliminating the need to tow anything at all.

"You don't have to tow a portable unit to the jobsite," says Dan Kokot, vice president, Vanair. "You can use one truck to do it all and still meet all your air needs. It can improve your efficiencies."

There are numerous choices for onboard air compressors, ranging from under-hood or -deck models to above-deck units that are available in rotary screw- or reciprocating piston-type configurations driven by belts, hydraulics or PTOs.

As in real estate, location can be an important consideration when determining which compressor is right for your truck.

Above-deck compressors — also known as utility skid mounts — are the most common, primarily because they're versatile. They come in a range of cfm/psi ratings, and are available in rotary screw and reciprocating piston types with hydraulic, gas or diesel drives. They are also less expensive than comparable under-hood or -deck models, and many can be moved to a new truck body if they outlive their initial host.

On the downside, you'll want to consider where the air compressor is mounted. "If it sits on top of the sidepacks, truck bed space remains free," says Tim Worman, product manager, Iowa Mold Tooling. "But if it has to sit in the bed, then you have to sacrifice space that could be used for carrying tools and other equipment."

Most also need to be readily exposed to outside air for cooling. "You can't necessarily put them in a cabinet all covered up because they would overheat," says Walter VanLaren, general sales manager, Service Trucks International. "They need to be up and out in the open where they can breathe and properly cool."

Space considerations are an advantage for under-hood or under-deck models.

Though less common than they were prior to today's sloped hoods and cramped engines, under-hood compressors still fill a need. These lightweight, compact models fit neatly under the hood to save space. For example, VMAC's 70-cfm unit weighs just 136 lbs. and is only 7 in. wide, 11 in. long and 6.5 in. high.

"If you like to have room in your truck bed, then an under-hood compressor is an option," says Mike Pettigrew, marketing manager, VMAC. "Except for the oil/air separator tank that mounts along the frame rail under the truck, the unit is completely hidden under the hood."

Since they are belt driven, under-hood models are also an option when hydraulic capacity is maxed out, or when hydraulics aren't plumbed into the vehicle. "Especially on smaller trucks, you might not have enough hydraulic power left to also run a compressor," says VanLaren.

For example, a Ford F-550 equipped with a hydraulically-driven crane and a generator/welder would not have sufficient excess hydraulic flow due to transmission torque limitations. "You might be forced to make a decision," says VanLaren. "Do you need to run all of those components at the same time, or can you switch from using one to another so you can share the flow? Or can you run the compressor by a different power source, namely the engine?"

When determining if an under-hood model is right for you, it's important to note they are available only as rotary screw models, and they are very truck specific. They are specially manufactured to mate with a particular engine and model of truck. So while it may outlive its host vehicle, it is unlikely to fit in the truck's replacement.

As with under-hood models, under-deck compressors free up payload space, plus some models run at about half the rpms for increased life. "These units will far outlive the chassis," says Kokot. "Then they can be moved to another truck."

Under-deck units are the least common and most expensive source of onboard air, admits VanLaren. "But they are a good choice when space is an issue," he adds.

Typically, under-deck models are also a good fit when you need a large volume of air, such as for testing gas and water mains for leaks, or running multiple tools requiring a high air volume (jackhammers, rock drills, etc.).

However, you will want to consider that compressors mounted under the deck are exposed to the environment. "We don't see a lot of demand for under-deck models," says Worman. "They're in the mud, dirt, etc. That can damage the drive shaft. Plus, to service it, you have to lie down on your back."

Which compressor type is best?

Reciprocating piston-type compressors are the mainstay for most mechanics trucks. But rotary screw compressors — the mainstay in industrial applications — have been making their way into the construction industry and, by many accounts, are gaining a strong foothold.

"People are servicing equipment that keeps getting bigger and bigger, so they need more air to do the job more effectively," says Worman. "They're also being measured on efficiencies. The quicker they can get this job done, the quicker they can move on to the next one and the more money they can make."

Rotary screw compressors have two intermeshed screws that, as they rotate, draw air through a cavity and compress it. One reason for their growing popularity is their ability to operate at a 100% duty cycle, supplying air continuously on demand. "A rotary screw compressor will pump out air all day long, whereas a piston-type compressor will cycle on and off and produce air 50% of the time," says Pettigrew.

Rotary screw units prefer to be run for extended periods of time. "These units like to run long, hard and hot," says Tom Noland, business development manager, Ingersoll Rand. "They are designed to be turned on and left on. Industrial rotary screws in factories, hospitals, etc., are turned on and left running 24/7, 365 days a year."

When rotary screws run hot, they burn off moisture brought in with the atmospheric air. If an operator runs a rotary screw for short, intermittent jobs over the course of the day without allowing the system to reach normal operating temperature, moisture can accumulate in the compressor oil which can reduce the bearing life of the unit.

"If you don't let it run, you have a higher chance of getting condensation in the compressor," adds VanLaren. "If you turn it on for just five or 10 minutes, you've warmed it enough to get some condensation, but you haven't let it heat up enough for that moisture to evaporate. That can contaminate the oil and lead to corrosion on the inside of the unit."

Although most rotary screw models don't include an air tank, IMT recommends utilizing a tank to dissipate more heat and remove additional moisture from the air. Plus, it can provide a quick burst of air without powering everything up.

Rotary screw compressors can be preferable when weight is a concern. A rotary screw unit will be more compact and lighter in weight, especially compared to a reciprocating piston unit driven by a diesel or gas engine. These units can weigh hundreds of pounds more despite comparable cfm ratings.

Yet, reciprocating piston units still corner the market for several reasons. For one, they're less expensive. According to Worman, rotary screw units can cost as much as 50% more when you factor in the total cost of the system, which includes the unit itself, and if the system requires, an auxiliary hydraulic cooler and larger hydraulic oil reservoir.

The screws in a rotary screw unit compress oil to produce the compressed air, says Worman. "Any particulate contamination can change the surface of the rotors so they won't mate up with each other," he points out. "You will also have added costs due to increased service intervals and greater filtration."

"It's not always that cut and dried," says Pettigrew. "There are advantages to each one."

The Arts Empowering Life Foundation plans to open its doors to artists, old and new, to help further the skill and knowledge of the aesthetic subject — an initiative that is aided by the donation of five portable contractor pumps by Tsurumi Pump.
Tsurumi America Inc.
March 5, 2021
Follow Us