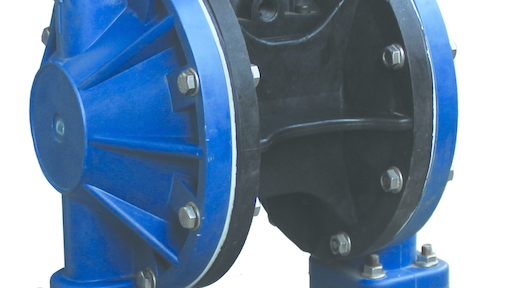 Chicago Pneumatic’s new range of five diaphragm pumps – in 1/2-in., 1-in., 1-1/2-in., 2-in., and 3-in. sizes – are available with aluminum, polypropylene (poly), and stainless steel housings that are easily interchangeable. Aluminum is good for fluids having potential hydrogen (pH) levels between 5.5 and 8.5, while stainless steel is suited to concentrated acids and alkaline, and poly is a low-cost alternative for pumping compatible fluids. Easily interchangeable diaphragm choices include Neoprene, Buna, Viton, Teflon, and Santoprene to tailor pumping efficiency to different liquids and temperatures. Neoprene is a general-purpose diaphragm for use in non-aggressive applications such as water-based slurries, well water or seawater, with the ability to handle temperature ranges from zero to 200 degrees Fahrenheit. Buna is for applications involving petroleum and oil-based fluids, and ranges from 10 to 180 deg. F. Working in temperatures ranging from -40 to 350 deg. F, a Viton diaphragm also works with aggressive fluids such as aromatic or chlorinated hydrocarbons and aggressive acids. Teflon can also handle aggressive fluids, but offers less of a temperature range than its Viton counterpart at 40 to 220 deg. F. Santoprene is built as a general-purpose diaphragm and has a good abrasion resistance, flex life and durability.

The ValuPrime is a compact and powerful pump ideally suited for the dewatering needs of the construction, industrial, and agricultural markets and was based on the proven technology of the Prime Aire and Prime Aire Plus models.
The Gorman-Rupp Co.
January 12, 2018

New pumps are capable of accommodating flows of up to 6,164 gpm
Atlas Copco
September 12, 2017