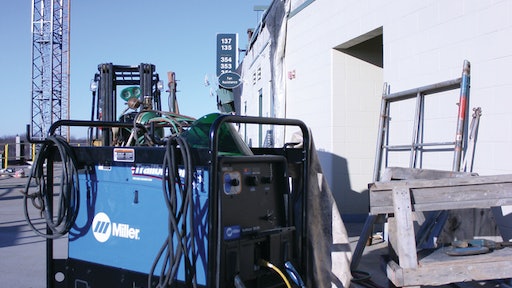 The new Trailblazer 325 EFI with Excel Power features technologies that reduce fuel use by as much as 35%, extend run times by up to 50% and reduce noise by as much as 68%.

Few sporting venues conjure up the awe and reverence shown to Lambeau Field, home of the Green Bay Packers. Situated in Green Bay, WI, the NFL’s smallest community, the outdoor stadium is considered hallowed ground to one of the sport’s most avid fan bases, and is a national landmark that brings visitors and sightseers to the area year-round.

In the fall of 2011, the Green Bay Packers began an expansion project to increase the stadium’s seating capacity and improve the overall fan experience. The expansion includes approximately 6,700 new seats in the South End Zone, a new viewing deck atop the North End Zone, enhanced entryways and stadium access and two giant new video boards in both end zones. Stadium construction was expected to provide an economic boon to the region, creating more than 1,600 jobs over a two-year period — and the added capacity is expected to bring in an additional $11 million annually in new spending to Brown County.

The North End Zone construction revolved around the addition of a massive shaft for six new elevators, the new party deck that sits on top the stadium roof and the new Mitsubishi Diamond Vision Video Board. The work in the South End Zone was even more extensive. To support the structures for the new video board and seating, an additional bay was added to the existing bowl and seven new levels were built on top of the existing three levels. This required major reinforcement of the existing steel columns.

This reinforcement included enhancing column base plates at the footings and adding plating and bar stock to the three levels of existing columns. Enhancing the bases involved adding 2-in. plate steel to the existing base. Steel plating 2.5 in. thick was added to some columns, while bar stock (2.5" x 2.5" and 5" x 5") was added to others.

With this came the need for extensive welding, as well as the ability to run a variety of ancillary tools such as grinders, lights and fume extractors. Engine-driven welder/generators were used extensively in these applications to provide both welding and power capabilities.

Stick welding was used primarily throughout the site, although a number of ironworkers were also trained on, and transitioned over to, Flux Cored welding. The engine-driven welder/generators were primarily used for Stick welding, using 1/8-in. 7018 Stick electrodes to perform the extensive reinforcement on the columns.

One of the workhorses on the project was the new Trailblazer 325 EFI with Excel Power, which is rated at 325 amps at 100% duty cycle for Stick welding and 10 to 35 volts of MIG and Flux-Cored welding power. EFI (electronic fuel injection) has been a key advancement to engine-driven welder generators in recent years. It optimizes the air/fuel ratio for reduced fuel consumption, longer runtimes and fewer emissions. It also provides more reliable starting performance in cold welding environments.

“Older engine drives with carburetors and chokes always had a hard time with the chokes freezing up in the winter,” says Jake Wirkuty, an ironworker with Miron Construction. “It seems with this electronic fuel injection that you can just switch over and it starts perfectly.”

The new Trailblazer models include Auto-Speed technology and Excel Power technologies. These technologies, combined with EFI, can reduce fuel use by as much as 35% and nearly double runtimes.

Excel Power is used to run jobsite power tools, providing 2,400 watts of pure 120-volt, 60-Hz generator power that is completely separate from the machine’s standard generator power (12,000 watts peak, 10,500 watts continuous). Since it is separate, workers with Miron Construction were able to plug in power tools and run those at idle speeds of 2,400 rpm, whereas older conventional machines would immediately ramp up to 3,600 rpm.

“It’s been easy to set up, and fuel consumption compared to the older Trailblazers – I bet you cut fuel in half,” says Wirkuty. “That means you spend less time filling up machines and less time having guys run to get fuel.”

By working at a lower rpm, the machines also generate reduced sound. These machines reduce engine noise by as much as 68%.

The new Trailblazer maintains independent weld and generator power. Smart-Cor technology ensures no interaction between the welding arc and jobsite tools being run off either the standard generator or Excel Power, minimizing the risk of fluctuations in the welding arc when a load is simultaneously applied to the generator. This proved particularly helpful for Miron Construction, since its workers would often weld and prep other materials with grinders off of the same machine.

“There have been scenarios here that we had a guy weld with the generator and a separate guy prepping columns with a grinder ahead of him, and we didn’t have any issues with the guy welding losing amperage,” says Wirkuty.

Miller Named 2016 Supplier of the Year by United Rentals

Discover how to generate improved operational efficiency with your welding and heating operations at this Sept. 21 event