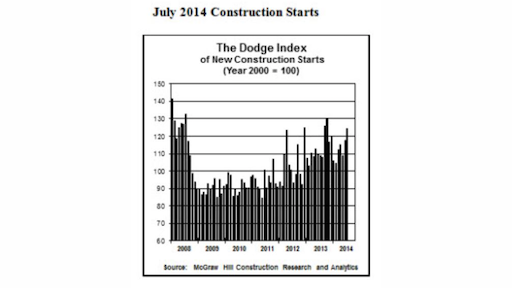 New construction starts in July climbed 6 percent to a seasonally adjusted annual rate of $588.8 billion, according to McGraw Hill Construction, a division of McGraw Hill Financial. Nonresidential building continued to advance, supported by yet another robust month for manufacturing plant projects as well as improvement for commercial building. The nonbuilding construction sector (public works and electric utilities) also advanced, helped by the start of a very large mass transit rail project. At the same time, residential building was unchanged from its pace in June. For the first seven months of 2014, total construction starts on an unadjusted basis were reported at $311.6 billion, a 4 percent gain compared to the same period a year ago.

The July statistics raised the Dodge Index to 125 (2000=100), up from a revised 118 for June, and marking the highest level for the Dodge Index so far in 2014. “The construction expansion this year is getting more of a contribution from nonresidential building,” stated Robert A. Murray, chief economist and vice president for McGraw Hill Construction.  “Manufacturing plant construction is seeing the start of numerous chemical and energy-related projects, consistent with the nation’s growing energy sector.  Commercial building is maintaining its upward momentum from low levels, while institutional building with its up-and-down pattern appears to be stabilizing after a lengthy decline. With residential building being limited so far in 2014 by the sluggish single family market, the further growth for nonresidential building has been needed to keep the construction expansion going. As for public works, this year’s pullback has stayed moderate, helped in part by the ongoing strength for mass transit work. The recent passage of a $10.8 billion ‘patch’ by Congress to shore up the Highway Trust Fund through May 2015 should also help to keep this year’s public works downturn from getting much more severe.”

Nonresidential building in July increased 7 percent to $229 billion (annual rate), showing further growth on top of the 12 percent increase reported in June. The manufacturing plant category jumped 44 percent, reflecting the start of still more chemical and energy-related facilities, including these projects in Texas – a $3.0 billion petrochemical plant in Baytown and a $1.7 billion ethylene plant in Freeport. Other large manufacturing projects entered as July starts included a $450 million semiconductor facility in Hillsboro, Ore., and a $370 million ore processing plant in Corpus Christi Texas. The commercial building group in July rose 11 percent, resuming its upward trend after retreating in June. Hotel construction in July climbed 29 percent, helped by groundbreaking for a $190 million hotel/time share tower in Honolulu and $114 million for the hotel portion of a $300 million mixed-use building in Los Angeles. Store construction improved 12 percent, aided by the start of a $49 million mall addition in Denver. Office construction grew 8 percent, supported by the start of $252 million for the office portion of a $420 million mixed-use building in Minneapolis and $170 million for the office portion of a $225 mixed-use building in Dallas. Warehouse construction was the one commercial project type not able to report a July gain, as it slipped 13 percent.

The institutional building group as a whole dropped 14 percent in July, retreating after growing 12 percent during the previous two months. Healthcare facilities fell 34 percent from its heightened June amount, which featured the start of a $900 million hospital campus in San Francisco. In contrast, educational building in July advanced 11 percent, supported by groundbreaking for such projects as a $130 million addition and renovation to a high school in Winchester, Mass., a $94 million new high school in Centerton, Ark., and an $86 million new high school in Laramie, Wyo. Through the first seven months of 2014, the dollar amount of new high school construction projects for the nation was up 10 percent, contributing to a 7 percent year-to-date gain for the overall educational building category. The July pattern for the smaller institutional project types was mixed. Transportation terminal construction grew 39 percent, lifted by the start of a $55 million renovation of an intermodal facility in Springfield, Mass., and church construction increased 19 percent from the previous month’s weak amount. On the negative side, the public buildings category retreated 12 percent while amusement-related construction dropped a more substantial 45 percent after a strong June that included the start of a $375 million arena in Las Vegas. Despite its steep decline, amusement-related construction did include the July start of a $129 million casino in Jamul, Calif.

Residential building, at $223.4 billion (annual rate) in July, held basically even with its June pace. Single family housing slipped 3 percent, reflecting this performance by major region – the West, down 10 percent; the Northeast and South Central, each down 3 percent; the Midwest, unchanged, and the South Atlantic, up 1 percent. Since the end of 2013, single family housing has been essentially flat, placing the strong upward movement that was reported during 2012 and most of 2013 on hold. Murray indicated, “One explanation for the sluggish single family market is that investor demand has waned, and first-time homebuyers have been unable to fill the gap, given continued tight bank lending standards. On a positive note, the most recent survey of bank lending officers conducted by the Federal Reserve shows that 18 percent of the respondents had eased lending standards on residential mortgages during the second quarter, which along with continued low mortgage rates may help housing demand and construction to strengthen in the latter half of this year.” Multifamily housing in July increased 8 percent, maintaining the moderate upward trend that’s been present during 2014. Large multifamily projects that supported the July increase included a $350 million multifamily tower in Queens, N.Y., a $260 million condominium tower in Honolulu, and $160 million for the multifamily portion of the $300 million mixed-use building in Los Angeles. Through the first seven months of 2014, the top five metropolitan areas ranked by the dollar amount of new multifamily starts were the following – New York, Washington DC, Los Angeles, Miami and Boston.

Nonbuilding construction in July climbed 14 percent to $136.4 billion (annual rate). While most of the public works categories showed decreased activity during July, miscellaneous public works (which includes site work, mass transit, and pipelines) soared 103 percent. The lift came mostly from the $1.2 billion related to the start of Phase 2 of the Dulles Corridor MetroRail project in Herndon, Va. In general, mass transit rail work has stayed strong during 2014, registering a 61 percent year-to-date gain for the nation as a whole. Highways and bridges moved in the downward direction during July, sliding 11 percent and 21 percent, respectively. The environmental public works categories showed a moderate loss of momentum in July, with river/harbor development and water supply systems each down 7 percent, while sewer construction fell 9 percent. The electric utility and gas plant category in July jumped 55 percent, as part of its occasional departure from the downward trend reported over the past year. Large projects in July that boosted the electric utility and gas plant total included a $1.5 billion natural gas liquid fractionator facility in Texas and $500 million for electrical system upgrades to the East Side Access Tunnel project in New York.

The 4 percent gain for total construction starts on an unadjusted basis during the first seven months of 2014 was the result of a varied performance by the three main construction sectors. Nonresidential building during the January-July period advanced 13 percent, due to this behavior – commercial building, up 5 percent; manufacturing building, up 149 percent; and institutional building, down 1 percent. Residential building grew 5 percent year-to-date, with single family housing up 2 percent and multifamily housing up 17 percent. Nonbuilding construction registered a 10 percent year-to-date decline, with public works down 10 percent and electric utilities down 8 percent.

By geography, total construction starts in the first seven months of 2014 revealed gains in two regions – the South Central, up 18 percent; and the Northeast, up 5 percent. The West was unchanged from the same period a year ago, while declines were posted by the Midwest, down 1 percent; and the South Atlantic, down 3 percent.