Chicago Cubs fans got a blast from the past this summer when the marquee at the Illinois baseball team’s home stadium was painted green and gold to celebrate its 100th anniversary. 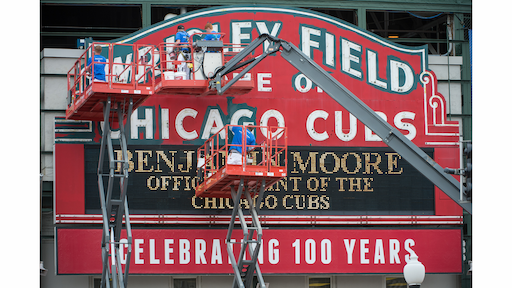 Chicago Cubs fans got a blast from the past this summer when the marquee at the Illinois baseball team’s home stadium was painted green and gold to celebrate its 100th anniversary.

Benjamin Moore, the official paint of Wrigley Field, used three Skyjack machines to repaint the iconic marquee back its original color, circa 1930s.

Located in the heart of Chicago, Wrigley Field is the oldest National League ballpark and the second oldest active major league ballpark after Fenway Park in Boston, MA.

Painters used the SJ 6832RT and SJ 66T machines to reach the giant marquee as they painted it Mallard Green and French Quarter Gold, replicating the original look of 1934, when the sign was installed.

Two market-leading SJ 6832RTs were used to help achieve the retro makeover at Wrigley Field. The rough-terrain scissor lift has a raised platform height of 32 feet, which corresponds to a working height of 38 feet, allowing the painters to reach the massive sign. With a 56-inch by 96-inch platform, a 60-inch turning radius and 40-percent gradeability, it was easy for painters to maneuver the SJ 6832 on the busy intersection of Clark and Addison streets. For added jobsite versatility the SJ6832 RT is drivable at full height with the roll-out deck fully extended.

The other Skyjack on site was an SJ 66T telescopic boom, which has a working height of 72 feet, a horizontal reach of 57 feet and weight capacity of 27,300 pounds. The boom’s 45-degree steering angle results in the industry’s tightest turning radius, allowing it to effortlessly maneuver around the marquee. The 66T also features a “Detroit Locker” type rear differential and limited slip front differential, allowing for superior terrainability on the uneven Chicago sidewalks.