The ASCE says that if investment in highways, bridges and transit systems continues at current levels, businesses and households will incur about $2 trillion in extra costs over 20 years. 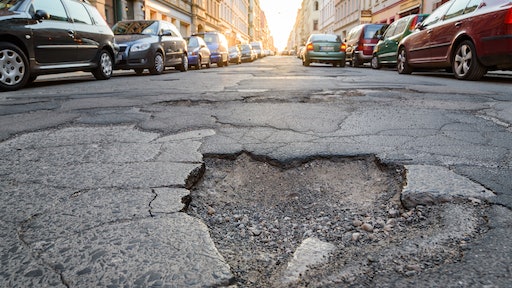 For years, the state of America's transportation infrastructure has been deteriorating. Rather than properly fund maintenance and repairs for our highways, bridges and roadways, we have continued to underfund infrastructure projects which has led to a backlog of work along with worsening conditions.

The American Society for Civil Engineers (ASCE) has released a report titled "Failure to Act" which outlines the longterm negative impacts our underfunded infrastructure will have on the economy.

The report states the nation’s surface transportation infrastructure has been underfunded for years and continues to experience deterioration in its condition and capacity to perform. Some $4.1 trillion will be needed from 2020 through 2039 to sustain surface transportation infrastructure nationwide, according to the research. During this period, about $2 trillion in spending is projected, leaving an investment gap of $2.1 trillion.

"Chronic underinvestment in our surface transportation infrastructure bears severe economic consequences," the report says. "Subpar roadway conditions and transit that does not meet a state of good repair produces direct costs to businesses and households, as well as to the national economy. Should investment in our nation’s highways, bridges and public transportation systems continue at current trend levels of capital spending, households and businesses will incur nearly $2 trillion dollars in extra costs cumulatively over the 20-year timeframe of this study."

Costs break down to almost $1.8 trillion to industries and more than $217 billion directly to American households, representing more than $1,500 per household over 20 years.

Not only will underinvestment in our infrastructure end up costing Americans in lost time and vehicle repairs, it could also cost them their jobs. Collectively,  professional services, manufacturing and health care sectors are expected to lose more than 540,000 jobs by 2040.

"The U.S. stands to lose jobs in several key industries because of inefficiencies in the surface transportation network," the report says. "These areas, some of which drive the nation’s leading research and development sectors, support innovation and technologically-related advancements. Unfortunately, these sectors will fall behind international competitors as transportation costs borne by U.S. industries drive prices higher."

Costs to industries and households are the starting point for economic impacts to be felt across the nation. As conditions continue to deteriorate overtime, they will increasingly detract from the ability of American households and businesses to be productive and prosperous at work and at home, inﬂicting cascading effects on the national economy.

"For example, the costs imposed by congestion and poor infrastructure will increase prices and decrease prof-its of goods and services provided by U.S. businesses, leading to reductions in wages and disposable income of households." the report says. "Moreover, households will have to divert more dollars to offset transportation costs and away from other purchases even as overall income is decreasing. The result is that cumulatively from 2020 through 2039, $6.2 trillion in national gross output will be lost, GDP will be $2.8 trillion lower and disposable household income will drop by $1.8 trillion. In addition, the 2039 economy is expected to support 726,000 fewer jobs due to poor surface transportation infrastructure."

The ASCE will release the full report later this year, but suspects that their ﬁndings are likely seriously understated, especially given the COVID-19 pandemic is exacerbating existing shortfalls. We cannot afford to let our infrastructure get any worse. Reach out to your Congressional leaders and tell them to Act on Infrastructure.