According to the annual bridge report from the American Road & Transportation Builders Association, there are 175 million daily crossings on over 45,000 structurally deficient U.S. bridges in poor condition. 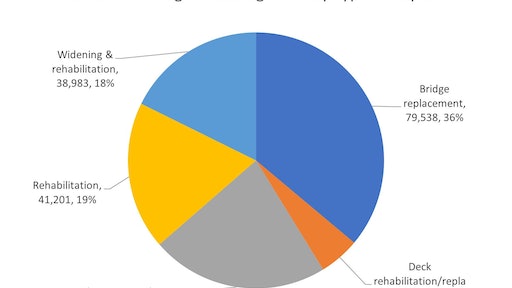 The American Road & Transportation Builders Association (ARTBA) has released their seventh annual analysis of the latest U.S. Department of Transportation’s National Bridge Inventory database and have found that more than one-third, or 220,000, of the nation’s 618,000 bridges need structural repair, rehabilitation work or replacement. This means there are there are 175 million daily crossings on over 45,000 structurally deficient U.S. bridges in poor condition.

Other Key Findings from the Report

You can view the whole report here.

Biden has said a gas tax increase would pay for only a fraction of the investment the country needs and that the hike would go against his promise not to raise taxes for people making under $400,000 to pay for this plan
Jessica Lombardo
April 14, 2021
Follow Us