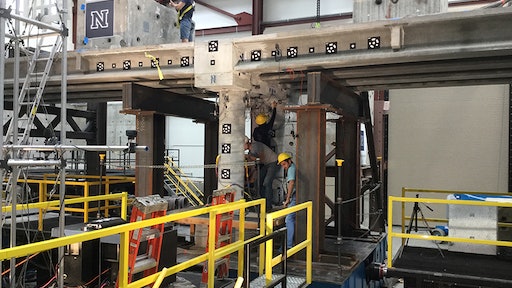 The bridge deck swayed, cracks circled the support columns and, in 20 seconds, the earthquake ended, and the bridge settled to a stop. Damaged, but still standing, the 100-ton, 70-ft.-long bridge was sitting on three large shake tables in the University of Nevada, Reno Earthquake Engineering Laboratory, the first large-scale bridge model to test five principles and techniques of accelerated bridge construction combined in one bridge model.

Engineers at the University of Nevada, Reno shook the massive model, mimicking the large ground motions of the deadly and damaging 1994 Northridge, California earthquake but amplified to a magnitude 7.5. The researchers are working in the lab to devise methods to construct bridges much faster than ordinary bridges and yet make sure they are safe.

“Specifically, the objective of the study is to design two large-scale bridge models incorporating some of the most promising ABC connections and components and test these under bidirectional earthquakes on massive shake tables to assess the performance of various components and connections and the interaction among them,” said Saiid Saiidi, principal investigator of the project, from the Department of Civil and Environmental Engineering and the director of the Center for Advanced Technology in Bridges and Infrastructure.

The study, funded by the California Department of Transportation, investigates the seismic response of bridges that are constructed with precast components and connections at the system level and will help facilitate the adoption of accelerated bridge construction in the field and the development of seismic design guidelines for ABC bridges.

The components – the bridge decks, columns and connections, were built separately outside the lab, and then assembled like an erector set on top of three 14 by 14 foot shake tables – hydraulically driven tables programmed to mimic the forces of large earthquakes.

The connections incorporated in the bridge model have been individually tested through Saiid’s previous research projects and some of the work by others.  But they have never been combined in a realistic bridge model subjected to realistic earthquake motions.

“The good seismic performance of a component does not guarantee that the entire bridge will resist the earthquake,” Saiidi said. “That’s why this test was necessary.”

The innovations in this bridge come from connections and an advanced concrete material known as ultra-high performance concrete (UHPC). The goal for using these connections and UHPC is to expedite bridge construction substantially. The five connection types are steel pipe pins, grouted ducts, UHPC deck joints, high-strength grout pocket deck-girder connections, and UHPC deck cap beam connections. The earthquake engineering specialists installed over 400 sensors: potentiometers, transducers, strain gauges, string potentiometers and accelerometers to record the forces of the earthquake simulated in the lab.

“This is a big step in getting these techniques and materials adopted by public agencies for use in the communities,” Saiid said. “The experiment, with the largest motions at 200% of the design earthquake, was a success, showing the components performed well. Of course, we have to analyze the huge amounts of data collected through our sensor network to quantify the results.”

The University’s Earthquake Engineering Laboratory combined with their Large-Scale Structures Laboratory comprise the biggest, most versatile large-scale structures, earthquake/seismic engineering facility in the United States, according to National Institute of Standards and Technology, and possibly the largest University-based facility of its kind in the world.