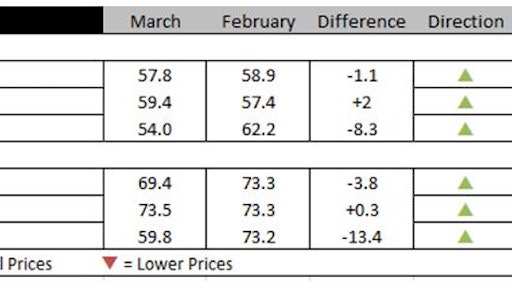 Construction costs rose again in March, according to IHS Markit and the Procurement Executives Group (PEG). The current headline IHS Markit PEG Engineering and Construction Cost Index registered 57.8, down 1.1 points compared to February. Both the materials/equipment and labor sub-indexes were above 50, indicating rising prices.

Materials/equipment prices rose at a slightly faster pace in March, with the index posting a 59.4 figure, up from the February figure of 57.4. Prices were up in 11 of the 12 categories; the only category to register lower prices was turbines, as heat exchangers and pumps and compressors rebounded above the neutral threshold. The previous month’s large gains in transformers and electrical equipment categories were met with lower figures in March, though they remained above 50. The three steel categories – fabricated structural steel, carbon steel pipe, and alloy steel pipe – posted the largest gains for the month.

“Steel prices surged on the announcement of Section 232 tariffs, with current prices in the United States rivaling or exceeding 2011 levels, the second highest ever recorded,” said John Anton, associate director – Pricing and Purchasing, IHS Markit. “Increased production will provide partial price relief late this year. In 2019 prices will be near 2006-2014 levels, which is 20 to 25 percent above 2015-2017 ranges.”

The six-month headline expectations index recorded another month of increasing prices: the index moved down 3.8 points from February but remains high at 69.4. The materials/equipment index remains elevated at 73.5, posting a slight gain from February’s reading of 73.3. Expectations for future price increases were widespread, with index figures for every component well above neutral. Price expectations for sub-contractor labor came in at 59.8, a sharp decline from 73.2 in February. However, labor costs are expected to rise in all regions of the United States and Canada.

In the survey comments, respondents indicated an outlook for increased activity in 2018. They also highlighted concerns about the impact of tariffs on steel prices.