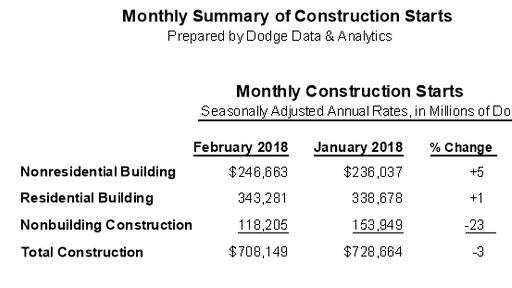 At a seasonally adjusted annual rate of $708.1 billion, new construction starts in February slipped 3% from the previous month, according to Dodge Data & Analytics. The reduced activity in February followed a 2% decline in January, as the early months of 2018 are showing some loss of momentum after the 12% increase reported back in December.

The nonbuilding construction sector, comprised of public works and electric utilities/gas plants, fell 23% in February, resulting in the decline for total construction starts for the second month in a row. In contrast, nonresidential building grew 5% in February, continuing the strengthening trend which resumed in December, and residential building improved a slight 1%.

During the first two months of 2018, total construction starts on an unadjusted basis were $102.4 billion, down 7% from the same period a year ago which had been lifted by the start of several unusually large projects, including the $3.6 billion Central Terminal replacement project at LaGuardia Airport in New York NY. On a 12-month moving total basis, total construction starts for the twelve months ending February 2018 were up 2% from the 12 months ending February 2017.

The February statistics produced a reading of 150 for the Dodge Index (2000=100), compared to 154 for January. “The 152 average for the Dodge Index during the first two months of 2018 is the same as the 152 average reported for the fourth quarter of 2017, as the pace of construction starts viewed over several months seems to have leveled off,” stated Robert A. Murray, chief economist for Dodge Data & Analytics. “What’s important to keep in mind is that the moderately subdued amount for total construction starts during the first two months of 2018 reflects diminished activity by public works and electric utilities, which given their inherent volatility are likely to bounce back over the next month or two. Compared to last year’s fourth quarter, the first two months of 2018 have seen further increases for nonresidential building, helped by its institutional building segment, and residential building, helped by multifamily housing. This suggests that the construction expansion, while slowing, is still in progress.

“It’s true that the construction industry is now seeing more headwinds,” Murray continued. “Material prices have risen over the past year, and the tariffs on steel and aluminum announced by the Trump Administration will lead to further price hikes. The Federal Reserve is tightening monetary policy, and concerns about inflation by the financial markets have contributed to rising long-term interest rates. The prospects of an infrastructure program getting passed by Congress this year remain uncertain, against the backdrop of a mounting federal budget deficit.

“At the same time, the economy is expected to get a near term lift from tax reform,’ he continued, “which would benefit commercial and manufacturing building, while funding from recent bond measures will support such institutional project types as school construction. On balance, the rate of growth for total construction is decelerating, but activity for 2018 is expected to stay at a relatively healthy amount.”

Nonbuilding construction in February was $118.2 billion (annual rate), down 23% from January. The electric utility/gas plant category was particularly weak, plunging 83% as the largest project entered as a February start was a $40 million electric substation upgrade in California. In January, the largest electric utility project entered as a construction start was an $872 million natural gas-fired power plant in Louisiana.

The river/harbor development category also experienced a steep decline in February, sliding 36%. On the plus side, highway and bridge construction grew 11% in February, climbing back to within 2% of last year’s average monthly pace after a sluggish January.

Large highway and bridge projects entered as February construction starts were the $545 million Gateway Expressway project in the Tampa FL area, the $441 million replacement of the Frederick Douglass Memorial Bridge and Suitland Parkway project in Washington DC, and a $225 million roadway and bridge improvement project in Norristown PA.

Sewer construction and water supply construction both rebounded in February, climbing 36% and 10% respectively.

Nonresidential building in February was $246.7 billion (annual rate), up 5% from January. The commercial categories as a group rose 14%, with gains across most of the structure types.

Office construction advanced 24% after a subdued January, boosted by the start of two large data centers – a $600 million Google data center in Clarksville TN and a $183 million Facebook data center in Ft. Worth TX. Other large office projects that reached groundbreaking in February were the $220 million Cerner Corporation Campus in Kansas City MO, the $200 million Turkish consulate office building in New York NY, and the $140 million Stafford Place renovation project in Arlington VA.

Commercial garages climbed 42% in February, with the lift coming from a $130 million parking expansion at Midway International Airport in Chicago IL.

Store construction registered a 6% gain in February, helped by the start of the $271 million expansion of the Bal Harbour Shops in Bal Harbour FL.

Warehouse construction in February was the one commercial structure type to decline, sliding 36%, although the latest month did include a $100 million Big Lots distribution center in Apple Valley CA.

The institutional categories as a group increased 5% in February, boosted by a 52% surge for new healthcare facilities. There were six healthcare facilities valued each at $100 million or more entered as February starts, led by the $400 million Boston Children’s Clinical Building in Boston MA, the $320 million Prince George’s County Regional Hospital in Upper Marlboro MD, and the $180 million expansion to the University of Mississippi Medical Center Children’s Hospital in Jackson MS.

For the smaller institutional categories, gains were reported for religious buildings, up 32%; and public buildings, up 9%; while declines were reported for amusement-related work, down 37%; and transportation terminals, down 38%. The decline for amusement-related work followed a very strong January that included the start of the $1.3 billion domed football stadium in Las Vegas NV for the soon-to-relocate Oakland Raiders, and February did see groundbreaking for the $363 million World Trade Center Performing Arts Complex in New York NY.

The manufacturing plant category dropped 48% in February after its elevated January amount, with the largest February project being a $200 million tissue plant in Macon GA.

Single-family housing in February slipped 1%, easing back for the second month in a row following the modest increases witnessed during the second half of 2017. In February, single-family housing by major region showed gains in the Northeast, up 12%; and the Midwest, up 8%; but declines in the South Atlantic, down 2%; the South Central, down 4%; and the West, down 5%.

By geography, total construction starts for the first two months of 2018 versus the same period a year ago performed as follows – the Midwest, up 13%; the South Atlantic, unchanged; the South Central, down 12%; the West, down 15%; and the Northeast, down 17%.

Additional insight is provided by looking at 12-month moving totals, in this case the 12 months ending February 2018 versus the 12 months ending February 2017, which lessens the volatility present in comparisons of just two months. On this basis, total construction starts were up 2%. By major sector, nonbuilding construction grew 1%, with public works up 9% while electric utilities/gas plants fell 24%. Nonresidential building also grew 1%, with institutional building up 3% and commercial building down 5%, while manufacturing building improved 16%. Residential building advanced 3%, with single family housing up 8% while multifamily housing retreated 7%.