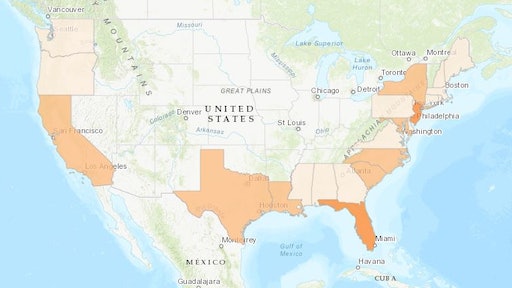 The interactive map allows you to learn more about the impact of chronic inundation on properties, people, home values and the tax base in specific states, communities or ZIP codes.

Accelerating sea level rise in the lower 48 states, primarily driven by climate change, is projected to worsen tidal flooding, putting as many as 311,000 coastal homes with a collective market value of about $117.5 billion today at risk of chronic flooding within the next 30 years, according to a new report by the Union of Concerned Scientists (UCS). Roughly 14,000 coastal commercial properties assessed at a value of roughly $18.5 billion also are at risk during that timeframe. By the end of the century, homes and businesses currently worth more than $1 trillion could be at risk: as many as 2.4 million homes valued at approximately $912 billion and 107,000 commercial properties assessed at $152 billion.

The analysis uses property data from the online real estate company Zillow combined with a peer-reviewed methodology developed by UCS for assessing areas at risk of frequent flooding. Using three sea level rise scenarios developed by the National Oceanic and Atmospheric Administration (NOAA), UCS determined how many residential and commercial properties along the entire lower 48 coastline are at risk of becoming chronically inundated from high tides, flooding an average of 26 times per year or more, in the coming decades even in the absence of major storms. The core results in the report are from the high sea level rise scenario — an appropriately conservative projection to use when estimating risk to homes, which are often the owner’s single biggest asset.

“What’s striking as we look along our coasts is that the significant risks of sea level rise to properties identified in our study often aren’t reflected in current home values in coastal real estate markets,” said Rachel Cleetus, an economist and policy director for the Climate and Energy Program at UCS, as well as a report co-author. “Unfortunately, in the years ahead many coastal communities will face declining property values as risk perceptions catch up with reality. In contrast with previous housing market crashes, values of properties chronically inundated due to sea level rise are unlikely to recover and will only continue to go further underwater, literally and figuratively.”

The consequences of chronic flooding of properties in specific communities could translate not just into eroding property values, but also into unlivable houses and falling tax revenues that fund schools, roads and emergency services in those places. The properties at risk by 2045 currently house roughly 550,000 people and contribute nearly $1.5 billion toward today’s property tax base. These numbers jump to about 4.7 million people and $12 billion by 2100. Municipalities are looking at even deeper revenue declines when commercial property, sales, and other business tax losses are factored in.

“For some communities, the potential hit to the local tax base could be staggering,” said Kristy Dahl, senior climate scientist at UCS and report co-author. “Some smaller, more rural communities may see 30%, 50% or even 70% of their property tax revenue at risk due to the number of chronically inundated homes. Tax base erosion could create particular challenges for communities already struggling with high poverty rates.”

According to the analysis, states with the most homes at risk by the end of the century are Florida, with about 1 million homes or more than 10% of the state’s current residential properties, New Jersey with 250,000 homes, and New York with 143,000 homes. States that could lose the most in home property values by 2100 are Florida at $351 billion, New Jersey at $108 billion and New York at nearly $100 billion. Decreases in property values also mean a lower property tax base. Florida, New York and New Jersey will see the biggest hits to their annual property tax revenue with municipalities losing about $5 billion, $1.9 billion and $1.7 billion total respectively.

“Not all affected communities will share the same experience,” said Erika Spanger-Siegfried, senior analyst in the Climate and Energy Program at UCS and report co-author. “Some may see sharp adjustments to their housing market in the not-too-distant future; some could see a slow, steady decline in home values; and others could potentially invest in protective measures to keep impacts at bay for a few more decades. In any case, by knowing how much time they have before a significant number of properties will be regularly flooded, communities can start planning and implementing responses now, while they still have a range of options from which to choose.”

“While wealthier homeowners may risk losing more of their net wealth cumulatively, less-wealthy ones are in jeopardy of losing a greater percentage of what they own,” said Cleetus. “Homes often represent a larger share of total assets for elderly or low-income residents. Renters too might find themselves in a tight market or having to put up with decaying buildings and increased nuisance flooding. Hits to the property tax base in low-income communities, which already experience significant underinvestment in critical services and infrastructure, could prove especially challenging.”

Meanwhile, the loss of coastal property values will have reverberations throughout the economy — affecting banks, insurers, investors, and developers — potentially triggering regional housing market crises or a more widespread economic crisis. Homeowners whose properties become chronically inundated could find themselves with mortgages that exceed the value of their homes, face steeply rising flood insurance premiums, or even default on their loans. Lenders carrying large numbers of these risky mortgages could lose money or eventually become insolvent, with smaller banks concentrated in regions with high flood risk being especially exposed. Coastal real estate investors and developers may similarly experience financial losses in some coastal areas.

“Actions today, especially the amount of global warming emissions we release, will help determine what our coasts will look like at the end of the century,” said Astrid Caldas, senior climate scientist at UCS and report co-author. “If we manage to meet the goals of the Paris Agreement by keeping warming to between 1.5° and 2° C and if ice loss is limited, 85% of all affected residential properties — valued at $782 billion today and currently accounting for more than $10.4 billion in annual property tax revenue to municipal governments — could avoid chronic flooding this century. The longer we wait to drastically reduce emissions, the less likely it is that we will achieve this outcome.”

Spreadsheets with data about the chronically inundated properties are available and can be sorted by state, by community (delineated by the Census Bureau as county subdivisions), and by ZIP code.

To use the interactive mapping tool, click here. The map allows you to learn more about the impact of chronic inundation on properties, people, home values and the tax base in specific states, communities or ZIP codes. When you zoom in, the maps become more detailed. You can also click on a specific state or community for more details about it.

For all other materials, including a  methodology document, a compilation of interviews with additional experts on this topic, and Spanish-language materials, click here.