Sundt has won more Build Americas than any other contractor in history; this one was for its work on the APS Four Corners Selective Catalytic Reduction Retrofits 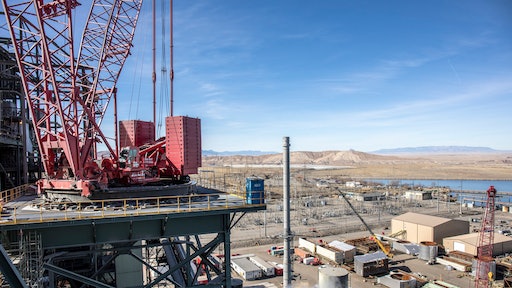 Sundt Construction, Inc. was recently awarded its 23rd Associated General Contractors of America (AGC) Build America Award for its work on the APS Four Corners Selective Catalytic Reduction Retrofits. The project won the 2019 JLT Build America in the Environmental Enhancement category. Sundt has won more Build Americas than any other contractor in history.

“We are proud of our work on this project and the widespread benefits it provides,” said Rich Keil, President of Sundt’s Industrial Group. “The operation of the facility will help maintain continued economic viability in the region, and the process upgrades will make a significant improvement in the overall regional air quality.”

The design-build project added four selective catalytic reduction systems for nitrogen oxide emission control for Units 4 and 5 of the APS Power Plant. The selective catalytic reactors (SCR) used are the tallest in North America and the second-largest air pre-heaters in the world, at 60 feet in diameter.

Sundt began the project in August 2015 (working for AECOM, which held the prime contract). The company self-performed much of the work at the site with its own skilled craft workforce. Over 400 craft staff members worked more than two million hours. Specialized trades included precision millwrighting, boiler-making, structural ironworking, piping, concrete and electrical.

Four Corners Generating Station has provided power to the area for 50 years. The generating station is powered by low-sulfur coal from the nearby Navajo mine and cooled by the nearby Morgan Lake.  Four Corners provides 1570 megawatts of energy. The upgraded equipment will enable the plant to meet more stringent environmental standards through reducing emissions by 80%. The change in units is expected to provide more than $6.3 billion in economic value to the region over the next 30 years.

The award was presented during the AGC’s 100th Annual Convention Awards Luncheon in Denver. The Build America awards honor AGC members who build the nation's most impressive construction projects ranging across the building, highway and transportation, utility infrastructure, and federal and heavy divisions.