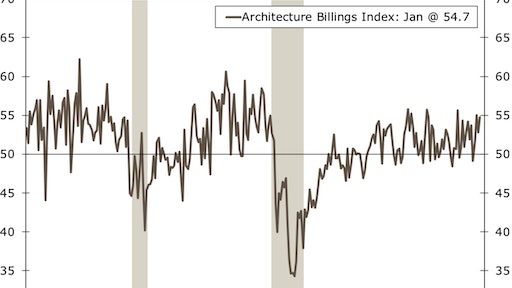 The index is just slightly below its recent high of 55.0 in November but marks the best January level since 2007. On a three-month average basis, the ABI is now at its highest level since September 2014.
Wells Fargo Securities

2018 started on a strong note for architecture firms, as the Architecture Billings Index (ABI) saw its highest January score since 2007. The American Institute of Architects (AIA) reported the January ABI score was 54.7, up from a score of 52.8 in the previous month. This score reflects an increase in design services provided by U.S. architecture firms (any score above 50 indicates an increase in billings). The new projects inquiry index was 61.1, down from a reading of 62.0 the previous month, while the new design contracts index increased slightly from 53.4 to 53.9.

“Healthy conditions continue across all sectors and regions except the Northeast, where firm billings softened for the second consecutive month,” said AIA Chief Economist, Kermit Baker, Hon. AIA, PhD. “With strong billings and healthy growth in new projects to start the year, firms remain generally optimistic about business conditions for the next several months.”

The West region scored the highest for January coming in at 56.2, up from 53.0 in December. The South registered at 55.3, a small drop from its 56.3 December reading. The Midwest was at 54.8 in January, up from its 52.9 reading. The Northeast saw its second month of decline, remaining below the 50 level at 47.3 for this month after a 49.4 reading in December.

All four sectors remained in positive territory in January with readings about 50 on the ABI. Multifamily came in at the highest again this month with a 56.0 January ABI score, up from 55.4 in December. Commercial/industrial followed with a 53.3 January score, down slightly from 54.8 in December. Institutional was up to 52.5 from a 51.2 December score, and mixed practice saw a slight decline from 50.4 in December to 50.1 in January.