How to Beat the Heat While Paving

Texas contractor offers best practices for working in the most extreme temperatures. 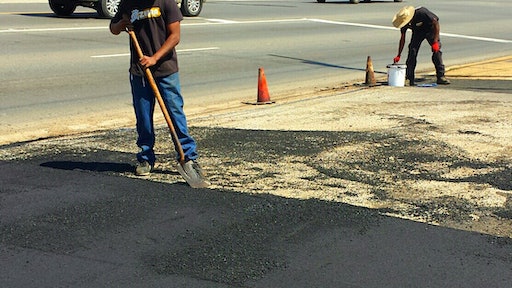 Johnson provides his crew with large hats that allow for a "create your own shade" alternative.

The deep southern heat of Texas is not the first place you’d think of to pick up a paving business. In fact, Zey Johnson, owner of Zebra Parking Lot Striping and Restorations, didn’t have plans to start paving at all.

With a background in computer network wiring configuration and telephone system installation, Johnson was working for his step-father at a phone center when he moved to Longview, TX from Dallas.

“He has a beautiful building with a concrete parking lot,” Johnson says. “One day he ask me to restripe the lines with a 4' roller. After about 20 minutes on my hands and knees, I had an epiphany saying to myself ‘there has to be a better way than this’.”

With permission from his wife that he’d make a little extra cash on the side, they began researching, doing tutorials, watching YouTube videos, reading Pavement Magazine and visiting other industry websites to try and learn the striping trade.

“I even worked for free as long as they paid me in knowledge, so I asked a lot of questions,” Johnson says. “I started looking for a stripers and found a guy going out of business that decided to sell his Graco 3400 and his Titan unit, along with a small trailer and enough stencils to get any job done. We took our life savings and gambled on an idea.”

Johnson started to get more striping work after some door to door advertising during his lunch break from his day job. Like most jobs well done, customers were soon asking Johnson if he knew how to sealcoat their lots too.

“At the time, I did not,” Johnson says. “But I did have common sense, so I purchased a customized seal tank and began a new phase of my business, sealcoating.”

Johnson found that a lot of these parking lots were pretty damaged and the asphalt had to be repaired in most cases. So in addition to striping and sealcoating, he started doing patch work too. As time went on, the inevitable request for parking lot overlays and new installations started to come in. Johnson was able to find a used Gehl Paver in Alabama.

“My wife and I, along with our infant daughter, took the journey across three state lines and purchased our first asphalt paver. We started this company in October of 2012. I went from doing this part time, to the point that I was getting so much business that a decision had to be made to go full time with my endeavor. Even though I was a tech for 11 years and was being groomed to take over the family business, I felt my calling was to be in this industry and I haven't looked back since.”

As in any state, the summer months can be brutal when you’re laying hot asphalt. But in the heart of Texas, temperatures can easily get up to 120°F during the day. If you take into consideration that the asphalt is a minimum of 300°F when laying hot mix, the combination can be a scorcher.

Johnson has learned over the years, the heat can’t be avoided all together, but his workers can combat the rising temps through some hard learned best practices.

“When doing an asphalt paving job we start our day as early as possible usually before 6 am,” Johnson says. “We try to get as much done as possible before the peak heat of the day which is usually after 1 pm.”

His crew protects themselves from the sun by wearing long sleeves. This may seem strange in extreme heat, but Johnson says it actually helps as the sleeves trap the sweat in from your body. “Perspiration is your body's natural cooling system and we try to take advantage of that,” Johnson says.

Johnson also provides his crew with large hats that allow for a "create your own shade" alternative. “We keep PLENTY of water and I encourage my guys to get a drink before not after you’re thirsty. The key is to stay hydrated and drink plenty of electrolytes. I provide the crew with unlimited water and Gatorade.”

Johnson also encourages that his workers get on a vitamin regimen. “Vitamins will actually give you that extra push you need when you feel tired” he says. “Always eat a balanced breakfast and try to include a banana as often as you can. This is a great source of Potassium which your body loses during the exposure to heat and profuse sweating and can lead to dehydration.” His crew also takes plenty of breaks in shaded areas.

This past summer, Johnson tried something new. “I gave my crew a product called 'Squincher Sqweeze Electrolyte Freeze Pops,’” Johnson says. “I found this one of my most effective weapons to fight these hot Texas summers.”

While Johnson and his crew learned best practices through on the job training, there are professional resources available that help combat heat related illnesses. According to the Occupational Health & Safety Association (OSHA), there have been 109 reported heat related deaths since 2008. Every one of them OSHA says could have been prevented with heat illness prevention and training.

According to their website (www.osha.gov) any worker exposed to hot and humid conditions is at risk of heat illness, especially those doing heavy work tasks or using bulky protective clothing and equipment, particularly those in the construction industry. Heat illnesses range from heat rash and heat cramps to heat exhaustion and heat stroke. Heat stroke requires immediate medical attention and can result in death.

They also state that employers should establish a complete heat illness prevention program to prevent heat illness. This includes: providing workers with water, rest and shade; gradually increasing workloads and allowing more frequent breaks for new workers or workers who have been away for a week or more to build a tolerance for working in the heat (acclimatization); modifying work schedules as necessary; planning for emergencies and training workers about the symptoms of heat-related illnesses and their prevention; and monitoring workers for signs of illness.

For more information about heat related illnesses and OSHA training to prevent them visit https://www.osha.gov/SLTC/heatillness/edresources.html.

[VIDEO] What is Heat Illness?

How to Keep Construction Workers Cool

One mark of a leader is adaptability. Flexible, waterproof, zero field blending and an easy install set Mastic One apart from the ordinary.
August 1, 2020

The Ignite Construction Summit is the industry’s premier management-focused education and networking program, specifically designed for business owners and top-level managers who are dedicated to “lighting a fire” within their company.
June 11, 2020
Follow Us