Pavement maintenance contractors give insight on how they keep their crew safe in the dark. 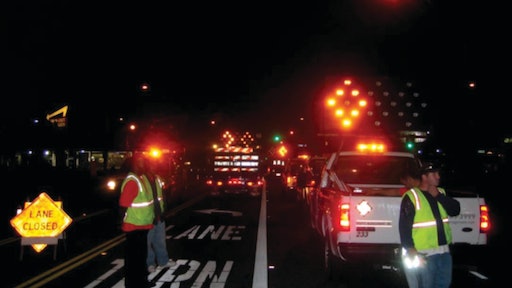 It’s no secret that workers on the nightshift have a higher fear for their safety and with good reason; The Bureau of Labor Statistics shows that 37% of work zone fatalities happen at night. Decreased visibility, mixed with the traveling public and operator fatigue can add up to something very dangerous. Still, many contractors prefer to work at night and have to out of necessity to get the job done without inconveniencing their customers.

“Safety is something everyone has to be passionate about,” Carl Barton, owner at Aardvark Memphis says. “All the money the company has invested in equipment and people, you don’t want that to go foul with an accident at night.”

So how can you help make your employees feel safer when they’re out on the night shift? Contractors say preparation, training, personal protection equipment and experience are the keys to successful night work.

Why own the night?

We know there are many benefits to working at night. Don Sokolow, president of Advanced Pavement Marking in West Olive, MI says they work at night for a majority of their pavement marking projects due to lower traffic volume and potentially increased cure time for markings.

However, he says working at night does not come without risks.

“While night work has less traffic volume, it does carry higher risks and dangers from drivers who are sleepy, intoxicated, texting, or have general difficulty with flashing lights or night driving,” Sokolow says. “Not only do we have to worry about wayward automobiles but also pedestrians, bikers, skateboarders and yes even the elderly on scooters who also have the same issues as mentioned above.”

For a sweeping contractor like Aardvark Memphis, they have no choice but to complete their work when the cars are off the pavement.

Barton has almost 20 years of experience navigating the night waters with his crew of 30 employees and 14 sweepers.

“It’s the nature of the business, when the parking lots are empty, that’s when we can sweep,” Barton says. “And that’s at night.”

Working at night involves more pre-planning than working during the day because lighting is an added element that needs to be addressed.

“Our lighting setups can vary from dedicated trailer lights to multiple auxiliary lights on all machines and trucks,” Sokolow says. “We have gone from setups that seemed to turn nighttime into day to setups solely focused on smaller work sections. Lasers and other illuminating pointing devices also come into play for night work.”

For more on how to properly light a jobsite, visit http://www.forconstructionpros.com/article/12043044/how-to-create-a-lighting-plan-for-night-construction.

Traffic control devices can also be one of the greatest investments that not only aid in traffic flow, but also crew member safety.

Keeping your crews safe at night can be as easy as making sure they know when a situation is unsafe.

“We have a three step training program we teach our employees,” Barton says. “Safety, Quality and productivity, SQp. The P is small case, with Safety and Quality being the most important. We’ll never sacrifice the safety and quality of  job for how much work gets done.”

“BE SEEN and KEEP MOVING is our training philosophy along with the “buddy system,” Sokolow says. “For every set of eyes looking down on their work, we try to have two sets always looking around keeping potential dangers in check along with informing operators of their surroundings and possible hazards.”

He keeps his employees visible with reflective and bright colored clothing, vests, hats, gloves and even reflective shoes are mandatory. He says head lamps are also another must have item for crew members who work at night.

“We incorporate retro-reflective materials on all of our trucks, machines, crew members, traffic control devices and more," Sokolow says. "This has increased our night time visibility along with extending our traffic awareness range greatly. At times our reflective strips and logos are seen from greater distances than our flashing lights.”

Along with visibility, fatigue is a huge factor to night work as our bodies are not programmed to be awake at night.

“Sleep is a huge risk,” Barton says. “We’ve unfortunately had drivers fall asleep at the wheel and hit things like poles. It’s always something you’re very cautious about.”

When Aardvark looks to hire people, they always look for drivers with 3rd shift experience. Before they even accept an application, they send the candidate to their website, SweepJob.com, where they list the good and bad of the job, and show them a 1-800-Sweeper video that shows the risks of working at night and what’s expected of them.

“We don’t want to catch anyone off guard,” Barton says. “To ensure that the crew members we do end up hiring are not out there tired, we first and foremost honor our own schedule. We create a schedule two weeks in advance, stick to it and do not change their shifts from day to night. That way they can never be surprised.”

Something unique Aardvark also does is a Role Call every night before the shift starts. The meeting starts promptly at 9PM and reinforces the SQp code to the drivers.

“Sure we’re going over Safety, Quality and productivity, but the other thing that we’re doing is looking every operator in the eye,” Barton says. “All of the managers and supervisors have the right to deadline an operator if they believe that operator doesn’t look like he’s prepared to go out. Just like the operator can deadline a piece of equipment that’s not working properly, we do that to drivers who don’t look ready to work.”

The night crew is also very connected to the central office during their maximum 10 hour shift, as supervisors check in with every operator, every two hours, over the radio.

“The nice thing about this is that after you’ve worked with people for a while and get to know their voices, you can tell when something is off,” Barton says. “It’s real easy to tell when someone is getting drowsy. 4AM is the most dangerous time for a driver, they hit a wall and you have to coach them through that. We call the guys at that time and encourage them to take a break.”

“Sleep does come into play with safety and production,” Sokolow says. “Pavement marking can only be performed when weather and traffic conditions are ideal, that means at times we have to work on crazy schedules taking advantage of optimal weather conditions or traffic patterns and sometimes crew members work a few hours during the day then are off resting for a heavy production night followed by a flip-flop pattern the very next day.

“When members are tired or become exhausted, we make all efforts to provide extra rest days or schedule changes for them when possible. We are paid to put markings down in a professional manner and we cannot afford to risk sloppy work or make mistakes that require costly removal or jeopardizes safety.”

Barton says another thing that has helped their drivers to be more alert at night is the addition of a fruit cart.

“Some of the studying we’ve done on third shift operators and sleep issues, as their bodies are trying to fight against nature, is that proper nutrition goes a long way,” Barton says.

“When operators get there at night, there is a cart full of fruit, protein and vitamin D. All of these things will help keep drivers alert,” Barton says. “We started this a year ago and the guys love it. It’s a morale booster and it’s one of those things where I can’t prove it, but I believe it’s working. If you haven’t had the accident, you can’t prove it didn’t happen.”

“Our experience over the years has shown which days we do the most production output with the least amount of issues,” Sokolow says. “Our production and paint output logs show several issues with working Saturday through mid-day Sunday that limits production. So when able, we try to stick to a schedule that gives crew members Saturday thru 10:30PM Sunday off. At times even during peak season crew members have been ahead of schedule allowing them extended time off either working ½ day Friday or taking it off entirely.”