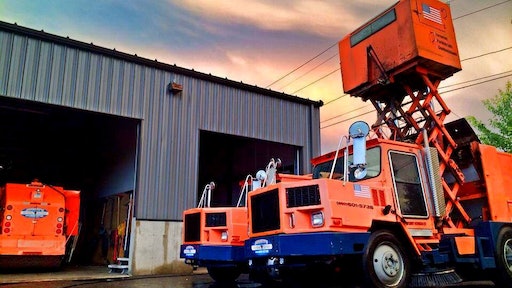 "What differs JSS from other companies in the same industry is we are 110% quality over quantity," James Doyle, JSS

In a world of big companies who rule the industry, it’s almost refreshing to come across a business like Johnny’s Sweeping Service LLC (JSS). Located in Torrington, CT, the company operates with just four employees; two full time and two part time.

You may wonder how a company that small can be successful, but owner Nick Newman is proof that it’s possible.

Established in 2001, Nick and his father Gary sought to build a full service sweeping company. They started in parking lots just cleaning up the sand and grit left behind.

When Gary passed away in early 2014, Nick, just 21, faced a decision to move forward with the company or move on.

“The day Nick’s father passed away was the day this company started a very long battle,” James Doyle, marketing and foreman at JSS says. “Nick has had to rebuild the company from the ground up. Very little funds were left, all bills of a functioning business were still there, including payroll of three full time guys at the time, fuel, maintenance etc.”

Doyle says overcoming that was the biggest battle in the 14 year history of the company, yet with the exception of a few kinks, the company continues to thrive.

“Our main services from April to November are mill sweeping for Costello Industries and S&S Asphalt reclamation,” Doyle says. “We have two full time machines dedicated to Costello and one dedicated to S&S, with the plans to expand the contract over the next five years.”

Aside from sweeping millings for new paved roads, JSS also services parking lots and sand removal on roads for over 30 landscape and construction contractors across the western part of Connecticut.

From November to April JSS is a full service commercial snow relocation and maintenance company with three trucks and a skid steer, providing service to gas stations, parking lots, factories and everything in between.

The success of the company has all come without the help of a website. In an internet driven society, that’s pretty unheard of.

“What differs JSS from other companies in the same industry is we are 110% quality over quantity,” Newman says. “Yes it's nice to have 10+ machines out working, but those machines are of no use if the customers are not satisfied with the work, as they are at the end of every job performed and completed by JSS.”

JSS plans to expand in both the sweeping and snow and ice industry over the next 10 years, Doyle says. "The expansion will be a new shop built to our specs, a handful of new sweepers to accommodate contracts and a few more trucks to add to our service and plow fleet."