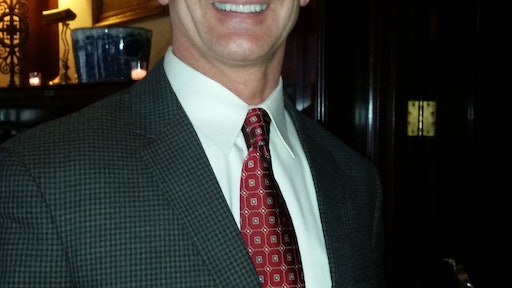 Insurance issues are never far from contractors’ top concerns, but career-long efforts by Scott Cerosky, Fairmont Specialty Insurance/ Crum & Forster Enterprise, have certainly moved those concerns lower on the list. It’s those efforts spanning more than 30 years that warrant recognition for Cerosky as the 2016 recipient of the Alan Curtis Industry Service Award.

Working in insurance profession since 1981, Cerosky in the early 1990s performed the due diligence required by the insurance industry to develop the actuarial data – the lifeblood of the insurance industry – that enabled proper classifications of street and parking lot sweepers and more recently pavers, sealcoaters and striping contractors.

His efforts demonstrated that each type of pavement maintenance related work has its own unique exposures that should be recognized and understood. Having a clear understanding of this resulted in more accurate insurance classifications and better protection with the insurance programs he spearheaded. Contractors saved significant premium dollars by having the appropriate classifications and rates assigned for their specific scopes of work. In addition, by giving insurance companies an improved and more accurate view of these individual industries, Cerosky’s efforts opened the door for increased competition among insurance companies/ agencies for the contractor dollar.

“The goal has always been to provide the industry with an insurance program by an insurance company that is reputable and progressive and flexible enough to adapt to the changing industry,” Cerosky says. “My feeling was always to put the industry first and then find the right carrier to fulfill those requirements at the lowest cost possible”.

It Started with Sweepers

“Insurance companies didn’t understand the unique characteristics of the business,” Cerosky says. “Sweepers were usually lumped in with the general construction industry or refuse haulers which traditionally have greater exposures and therefore higher rates”.

As recently as the late 1980s, sweepers faced costly obstacles as a result of inaccurate insurance classifications, among other issues. Scott Cerosky, who had worked part time in the sweeping industry starting at age 16, was asked by various members of the Contract Sweepers Institute (CSI), a forerunner of the North American Power Sweeping Association (NAPSA), if he was interested in looking at the industry and possibly developing a national program specific to the industry. He took on the task of researching actuarial data from throughout the country to prove to insurance companies that parking lot sweepers and even street sweepers should not be misclassified with waste haulers and other on-road often fast-moving equipment – or even equipment operating in stationary work zones.

“I told them it was going to take some time and require a lot of due diligence to get the actuarial data that I knew insurance companies would need in order to consider providing coverage,” Cerosky says. “The sweepers as a group were very cooperative in the effort, and that was the initial step. We realized

it didn’t matter where the company was located because for the most part all power sweeping companies had very similar risk characteristics. But we still needed to obtain information from various geographical locations around the country in order for the insurance carriers we were approaching to fully understand the unique nature of their business.”

“They gathered the data I was looking for from the geographical areas throughout the country so we could develop a national program.” Once I received this information and broke it down, we presented it to various insurance companies that we believed would be interested.”

Cerosky says it took almost seven months to collect the actuarial data – what are the primary loss drivers in the industry -- from sweeping contractors. “ There are so many people I have to thank who were an integral part of this very laborious process. However, they also understood what was needed in order for this effort to be completed and ultimately provided back to their industry”.

“Ultimately we were able to demonstrate that the power sweeping industry was suffering over the years by being dumped into high-risk categories where it didn’t belong,” Cerosky says. The data sweepers provided helped prove that sweepers operate at a much slower and safer speed than other types of trucks. Also, sweepers are one-dimensional types of equipment, meaning it’s either working or it’s parked. This also presents a much more favorable situation to insurance carriers”.

As a result of his efforts Cerosky and Zurich Insurance Group developed the first national program that better matched the work sweepers do, protected them better and enabled them to save on the costly and inappropriate policies they had been forced to buy.

“It was the first crack in the wall,” Cerosky says.

Cerosky continued to work on the program over the coming years with through several insurance companies, always striving to provide better coverages at lower prices. Following a brief hiatus from the industry, he returned -- recognizing that the industry was undergoing what he terms “a formidable change.”

“The industry really started to integrate itself. Contractors who primarily specialized in providing one type of service to their customers were having demands put on them to offer all types of pavement maintenance and ancillary services.”

To Cerosky that meant the insurance companies needed to expand the program to provide coverage for those other service. So in 2012 he along with Fairmont Specialty Insurance (A Crum& Forster Company), developed and launched a very comprehensive pavement maintenance insurance program that did for pavers, sealcoaters and stripers what he’d already been instrumental in doing for sweepers.

“This insurance company liked that most of the sealcoating and striping work is done in off-peak hours and that you can’t stripe or seal when there is a lot of vehicles or pedestrian traffic. This presents a lower risk hazard and limited exposure. Again, that helped differentiate the sealcoating and striping industries from other industries they were being lumped into.”

Among the insurance changes Cerosky initiated are:

“It all comes back to the insurance companies not understanding the industry and knowing that the dynamics of this industry are very different from the roadbuilding or heavy construction industry,” he says. “There’s a clear differentiation and we were able to demonstrate that to the insurance companies over the years which enabled us to provide more accurate and broader coverage at significantly lower rates.”

“I’m extremely fortunate to be associated with the people in this industry over the years who have been supportive of me and my efforts,” Cerosky says. “The industry on the whole has been extremely cooperative in providing what was needed so I could always try and bring back the most comprehensive and cost effective insurance program to them.”

“We will continue to work closely with the pavement maintenance industry to be on the cutting edge of what they demand and deserve as the best insurance program and services possible.”