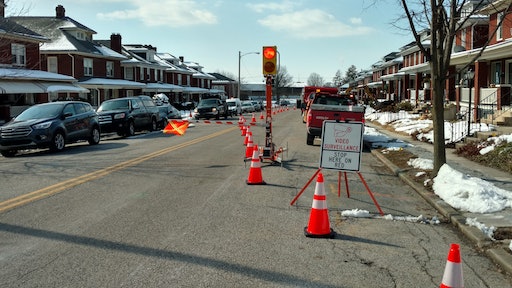 Designed for use on short-term projects, the Guardian SmartFlagger features a flag mounted to a barrier arm and red and yellow lights to reinforce the position of the flag.

As the construction season moves into high gear so does the threat of injury in work zones. Ashley Buckingham, D.E. Gemmill marketing director, cites the following Federal Highway Administration figures for 2017:

So, it’s no surprise that D.E. Gemmill, a pavement marking 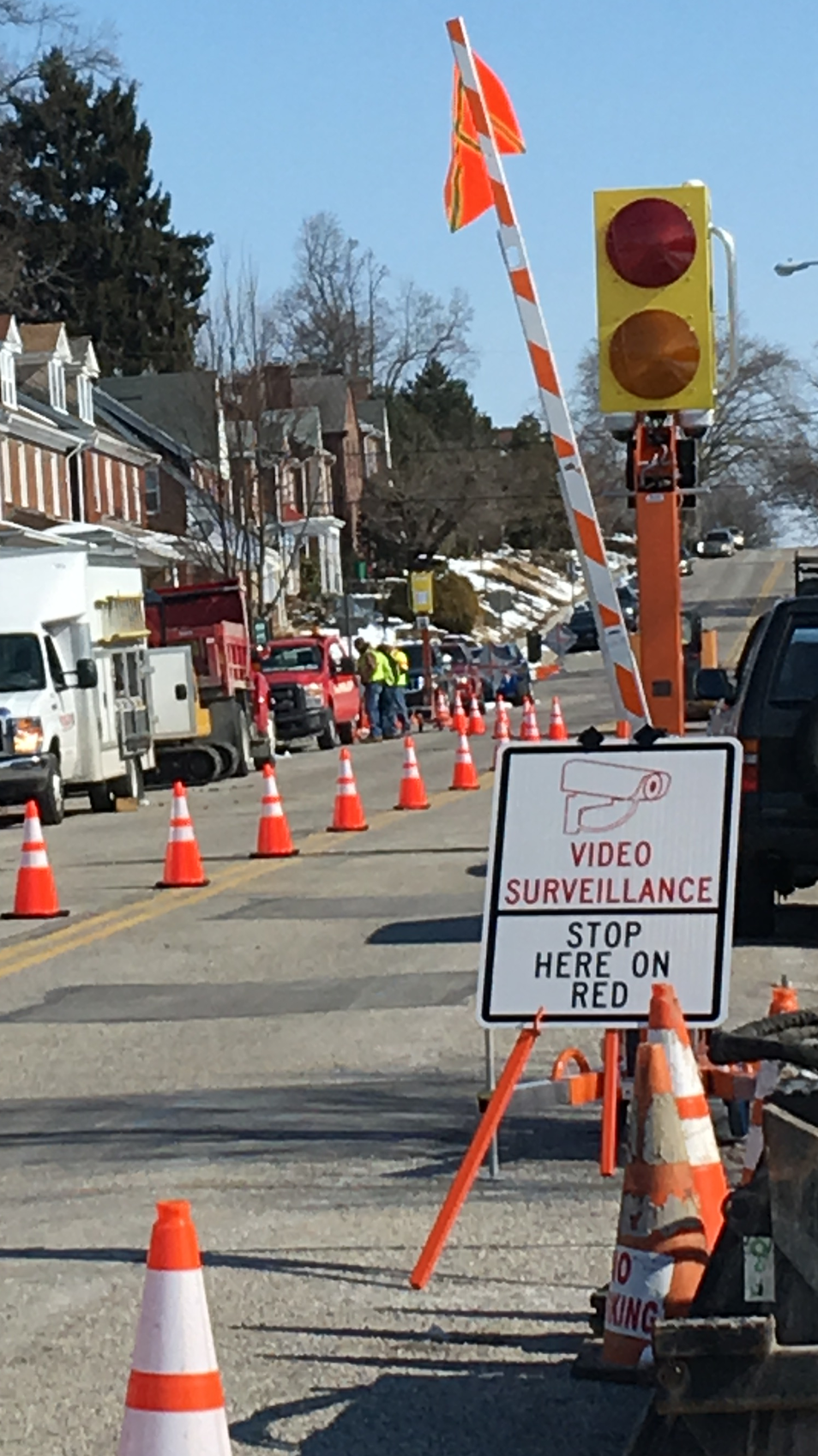 The SmartFlagger system saves real-time video for up to seven days so video can be used to record incidents, accidents or unlawful acts. contractor in Red Lion, PA, has as one of its missions to keep their personnel and the public safe. This year D.E. Gemmill is incorporating an Automated Flagger Assistance Device, the Guardian SmartFlagger from Site 2020, into their temporary on-road work zones to reduce the possibility of worker injury.

Buckingham says the new technology incorporates familiar visual aspects into the automated system. In addition to a flag mounted to a barrier arm, there are red (for stop) and yellow (precede with caution) lights to reinforce the position of the flag. The devices are designed for short term projects, typically 12 hours or less, but can be used extending through multiple shifts by simply rotating out the human operator. D. E. Gemmill Inc. intends to use the technology and supply the service for striping, paving, utility work and similar short-term construction projects.

“This technology is an alternative to placing flaggers in harms way, and reduces the danger to workers while providing a safe and secure method to manage traffic,” she says. “We’re a safety-oriented company so we’re always looking to the future and what we can do to improve safety. We want to take advantage of any technology that comes our way to be able to improve the safety of not only our crew, but workers and the traveling public moving through a work zone.”

Started in 1986 as a pavement maintenance company, D.E. Gemmill today employs 60 people and generates 46% of its work from long-line striping, 14% from parking lot striping, 13% from providing traffic control to other contractors and municipalities, 1% from sealcoating and cracksealing, and the remainder from the manufacture of street, road and construction signs, and a stand-alone retail operation providing traffic control and work zone products and safety devices and apparel.

Buckingham says D.E. Gemmill handles all of its own traffic control, only hiring a traffic control subcontractor for large, long-term projects. She says 68% of the company’s employees are traffic-control certified through either the American Traffic Safety Services Association (ATSSA) or the Maryland State Highway Administration. The contractor’s pavement marking technicians are certified through the Mid-Atlantic Technician Certification Program.

Removing Flaggers from the Work Zone

Buckingham says D.E. Gemmill learned of the Guardian SmartFlagger technology at the recent ATSSA Traffic Expo and decided to pursue it. A month later they were training on it in the field.

The traditional flagger operation exposes two workers to the 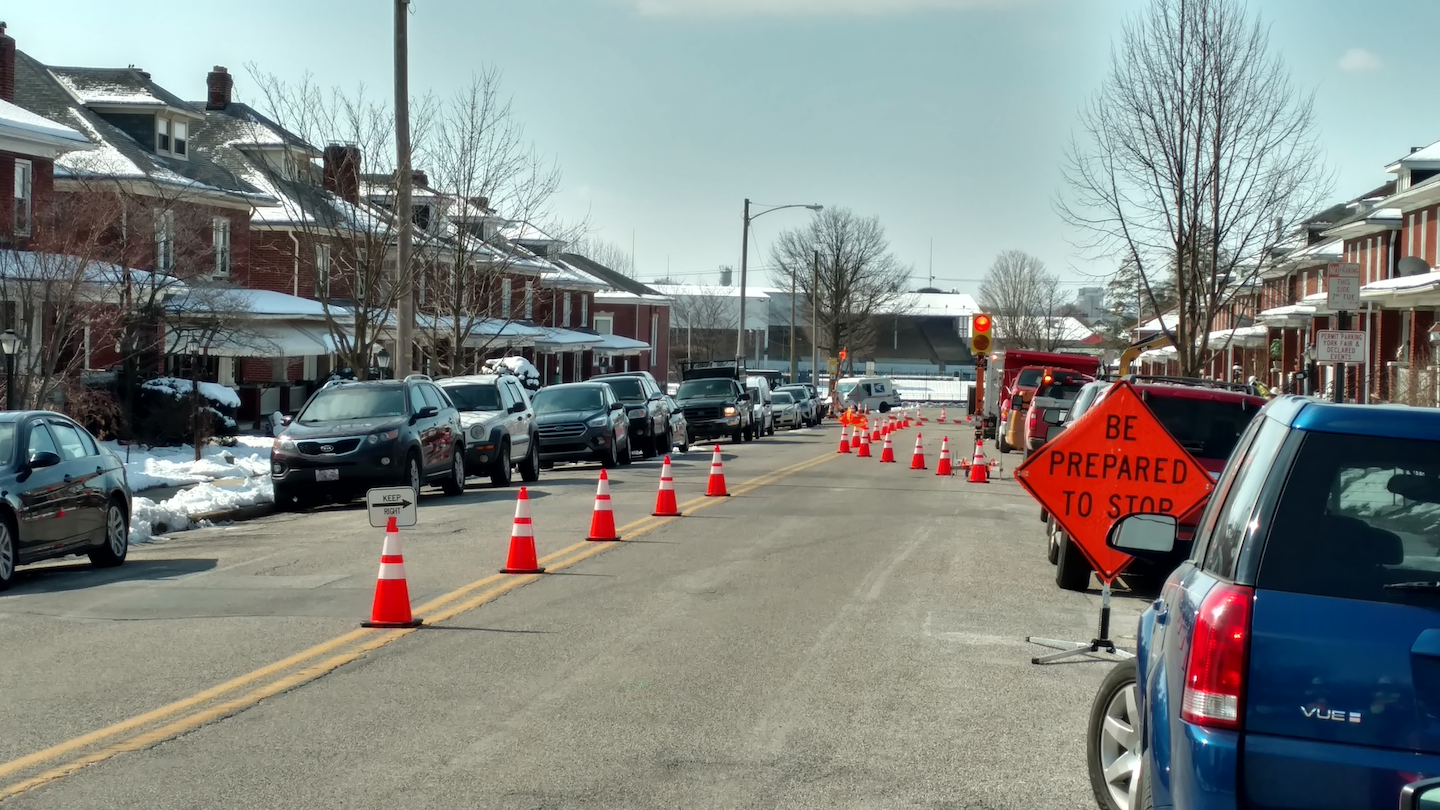 driving public -- one at each end of the work zone, working with Stop/Slow paddles and communicating by walkie-talkie or cell phone. One flagger opens his end of the zone to traffic while the other flagger stops traffic from entering the zone. Both flaggers are in the work zone and exposed to traffic as it enters or exits the work zone.

The SmartFlagger system exposes no workers to drivers because it is operated via tablet by one-person in their work zone vehicle nearby. The SmartFlagger uses devices at each work zone entrance with an arm bar that is raised and lowered through the tablet to prevent traffic from entering the work zone. There are cameras on each unit which allows the operator to view both ends of the automatic flagging operation. In most circumstances these units can be set up 1.2 miles apart, creating a work zone approximately 1 mile long that can be controlled by one person. The cameras create a live, real-time video feed which is connected to a tablet.

The system, can be safely interrupted anytime to allow emergency vehicles to pass through the work zone. In the event of a work zone intrusion, a 118-decibel alarm alerts the construction personnel that there might be a threat to safety.

The SmartFlagger can be operated automatically with proven timers and calculations when required, however most states require a human operator to be present and monitoring the device at all times “But it’s not meant to be used as an automatic traffic control device without a person monitoring the traffic and deciding when to raise and lower the arms.

“Flaggers still need to be certified to set up the SmartFlagger, and there still must be a certified flagger on the job to run the system,” she says. “But now he’s a flagger in a safe location instead of being out in the traffic.”

“Safety is something we always pride ourselves on, keeping our personnel safe out there and keeping the drivers safe,” Buckingham, says.

She says the company conducts weekly “toolbox talk” sessions that include a safety element each week and hosts annual safety meetings all employees must attend.

“The whole safety aspect helps separate us from our competition. And this Automated Flagger Assistance Device is not only something new, but it shows how we’re looking out for our flaggers and making construction zones a little safer. Construction zones are inherently dangerous places to work so whatever we can do to make it safer for our people to work in them and for people to drive through them we want to do.”

Buckingham says that research has shown that motorists are 200% more likely to comply with an automated device than with a human flagger. “Drivers are not typically looking for live people to direct them through traffic, “People are used to seeing automated traffic control devices like stoplights and have a better response to them,” she says.

Buckingham says the Guardian SmartFlagger is approved for use in more than 40 states.

According to a new study, researchers have identified polymer additives that increase the storage stability of asphalt rubber.

Each year, about 27 million tires end up in landfills, dumps and stockpiles, where they pose health and environmental hazards. These tires could get a second life as components of the roads they once traveled, but blends of ground tires and asphalt can be unstable. Now, researchers have identified polymer additives that increase the storage stability of asphalt rubber.

Because rubber is so resilient, scrap tires persist in the environment for a long time, creating fire hazards and breeding grounds for rodents and mosquitoes. This durability could make tires advantageous for producing rubber asphalt -- a mixture of ground tire rubber and bitumen (asphalt) used to pave and repair roads. Currently, about half of U.S. states use ground tire rubber as a component of asphalt mixes, citing better performance than regular asphalt, cost-effectiveness and environmental benefits. However, the material has two major challenges that limit wider use: its high viscosity and tendency to separate into rubber and bitumen layers during storage. Christopher Williams, Eric Cochran and colleagues wanted to identify polymer additives that mitigate these problems.

According to the new study by the American Chemical Society, researchers have identified polymer additives that increase the storage stability of asphalt rubber. The team found that, when mixed with asphalt, blends of recycled tire rubber (RTR) with trans-isoprene or polybutadiene performed best. These mixtures reduced the density of RTR so that it was similar to asphalt and did not settle during storage. The polymers also helped reduce the viscosity of the asphalt rubber so that the material was easier to work with.