A guide to entering the thermoplastic pavement marking business 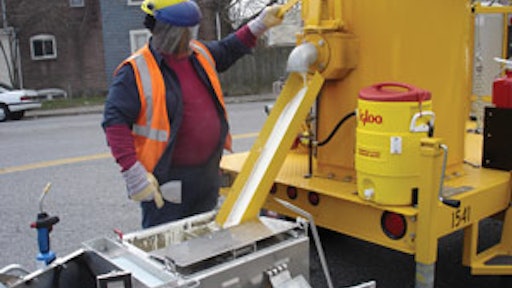 When the handliner is empty the operator returns to the melter and fills it up again. The advantage is one of productivity and efficiency as an operator or crew can put down much more material on the pavement when using melter kettles to heat it. Note the face shield.

Crosswalks, stop bars, turn arrows, and lettering ("ONLYs") increasingly have become targets for the more-expensive but longer-lasting thermoplastic markings, so many contractors are considering adding this service to their pavement marking operations.

Thermoplastic, as applied to pavement, is a molten material created from melting either plastic granules or a pre-mixed material that is heated, cooled, and formed into a block which is then melted. Material is heated to 400°F - 425°F before it is applied to the pavement by a walk-behind thermoplastic handliner.

Handliners are smaller, portable pieces of equipment that hold the molten material and maintain it at the proper temperature long enough to let the operator apply it to the pavement. Made of either steel or aluminum, handliners are pushed by the operator - none are self propelled.

Each handliner features a tank to hold the molten plastic, a manual agitator to enable the operator to keep the material mixed, and a propane-fueled burner beneath the holding tank and on the side of it that heats the die that accept the molten material from the tank and form it into shape on the pavement.

Melting capability
Manufacturers agree that the most effective way to heat the material is in a kettle - separate pieces of equipment attached to a stake truck or trailer. Heated by either diesel or propane, the kettles are designed to heat the granules or blocks in large amounts and to maintain the material at a specific temperature while the crew is placing markings. The operator pushes the handliner to the trailer, gravity flow fills the handliner tank with the molten material from the kettle, and the operator returns to marking the pavement.

Manufacturers acknowledge that handliners can be used to melt the material, but while that approach costs significantly less initially than buying additional kettles, it is inefficient. It will take at least 60 minutes to heat material from granules or block in a handliner. Once the handliner is empty it will take a minimum 45 minutes to heat enough material to get back to work.

"It's a slow and laborious process when done without pre-melter kettles," says Steve Shinners, vice president of sales and marketing, MRL Equipment Co. "If you're only heating and planning on putting down 500 or 600 pounds of material daily it can be done, but as soon as you get to a level where volume is an issue and productivity is an issue you need to consider buying kettles."

Shinners says the majority of handliners MRL sells are sold in some type of a package with pre-melter kettles. "It's really all about melting. How much you can melt and how fast you can melt it dictates how much you can put down in a typical shift," Shinners says. "It's really foolish to think you are going to be in this business and try to compete by heating the material in the handliner itself."

"That's the only way we recommend melting material in the handliner," says Marvin Mayle, technical services, M-B Companies. "Any other way is not cost effective because it just takes too long."

Ease of operation
Because handliners are push units, manufacturers suggest testing them out if you can before buying. "These machines carry a lot of weight so if you've got an operator pushing one you want to be sure it moves as resistance-free as possible," Waxler says.

While weight can vary, most handliners weigh between 275 and 300 pounds, empty. Add on a 20-pound propane tank, a dispenser that can hold 50 pounds of glass beads, and another 250 pounds of molten material and the operator is pushing near 600 pounds around on the pavement.

"The more material it holds, the harder it is to push," Mayle says. "That's why you want to make sure the machine you buy is well balanced. Pick it up from the back end and swing it side to side and push it back and forth. You'll get a good feel for how balanced it is."

He also suggests giving the machine a push on level ground to see how straight it tracks. "It should travel at least 25 feet straight and smooth," Mayle says.

Waxler adds that ease of operation also should include the operator's station, which is at the rear of the machine. "Most machines allow the operator to stay at the back side and operate the machine all from the handle," Waxler says. "It's important that everything is done to make the operator's job as effortless as possible."

Wheels
Directly related to the ease of operation are the wheels on the equipment. The common configuration for handliners is two wheels in front and one caster wheel at the rear of the machine. Traditionally, all three wheels are locked so when the operator needs to turn the unit he actually has to lift it a half-inch or so from the rear and slide the back of the machine to change its direction or make a turn. Cody Irons, equipment sales for MRL, says many contractors like the locked wheel design because they feel the machines are easier to push straight when the wheels don't swivel.

Agitation
Agitation is important because the thermoplastic material itself contains glass beads to provide the markings with higher levels of retroreflectivity as it wears. But for those beads to be effective they need to be dispersed throughout the molten material, and as the material is heated the glass beads tend to sink to the bottom of the tank. Agitation helps keep the beads in suspension in the molten plastic, which also prevents them from settling and clogging the system.

Shinners says that on equipment of this size, agitation is achieved by a hand crank. Some agitators are located at the front of the unit. Others, such as those on the Advanced Striping Equipment, are located on the handle where the operator works from.

Thermostat
Mayle says that all handliners should have a thermostat, and he recommends all thermostats be in clear view of the operator. "Keeping track of the material temperature is a big part of the success of a thermoplastic marking operation," Mayle says.

Dies
Extrusion dies apply the material directly onto the pavement. Made of steel or aluminum, with carbide wearing edges to extend life, the dies are changed by the operator when a different width of line is needed.

Some dies are heated via radiant heat while others rely on an open gas jet to keep the die and its openings warm. Because dies often are changed in the field it's important they can be changed easily, and some feature a spring-release die-lock assembly.

Heating elements
Handliners are propane heated, and Irons says two areas of the handliner need heat: The material storage tank and the die. If either cools too much the molten material returns back to a solid as it cools and will not flow. If the die is not kept hot the material will stick to it and a good line will not be formed.

Cost of the entire operation
As with any piece of equipment, cost is a consideration. But manufacturers stress that contractors need to consider the entire cost of the operation, not just the cost of a handliner.

"If I'm an owner, cost is important; there's no doubt about it," Waxler says. "But at the same time I want to be able to give my man something to operate and something that will pay me back as an owner. You have to look at productivity and keeping the equipment in the field. You have to look at the cost of the entire operation."

"Safety, Safety, Safety"
Thermoplastic material is heated to roughly 400°F before it is placed on the pavement, and in addition to installation the process involves transferring gallons of molten material from melters to the handliner. So manufacturers stress that safety procedures must be established, followed, and closely monitored throughout the operation.

Manufacturers provide a detailed set of safety guidelines, which include wearing a face shield when loading material, wearing heat-resistant gloves any time you're working around the material, and always wearing long sleeves. "You can't just brush it off if it gets on your skin," Shinners says. MRL recommends a cooler full of ice water on site so if a worker does get some material on him he can plunge his hand or arm into the cooler to immediately stop the heat before seeking medical attention.

One or Two Handliners?
Manufacturers agree contractors need to decide how deeply they're going to get involved in thermoplastic applications before buying their handliners. The type of work will determine the volume of material you'll be working with and also whether you'll be doing a significant amount of work in white and yellow markings.

MRL Equipment's Cody Irons says almost all contractors who buy kettles buy two - one for white material and one for yellow material. Markings are common in both colors so it makes sense to have both available on the job. "If you have to change machines out there it's pretty easy to put down yellow in a machine that had white, but putting down white from a machine that contained yellow is very difficult," says MRL's Steve Shinners.

A Summer of 80 Million Linear Feet

Truckin' with an East Coast Striper