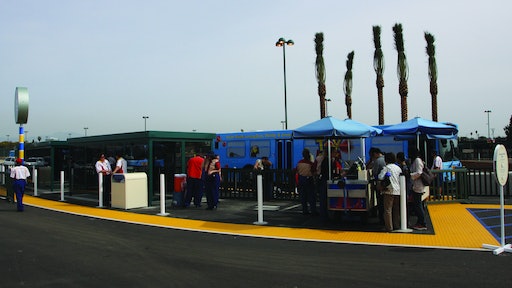 Tactile domes are required by the Americans with Disabilities Act wherever there’s a level transition from pedestrian pavement to active roadway. They give vision-impaired pedestrians a warning of potential traffic danger that can be felt underfoot or sensed with a cane. The domes also have to be compatible with wheelchairs and walkers, so dome size and spacing have been established. (Current guidelines give a narrow range of spacing, but not a single, specific number.)

When Disneyland in Anaheim, CA, constructed its new Toy Story parking lot a distance away from the actual theme parks, it added almost 2,700 new parking spaces, almost quadrupling the parking area to 1.4 million sq. ft. And because the new lot was away from the park Disney also had to incorporate a shuttle bus system with very large bus-loading areas. These loading zones had long curved, level transitions between the sidewalk and the roadway, so these loading zones required ADA-compliant tactile domes.

To solve the problem the Walt Disney Company turned to contractor EBS Elite Bobcat Service, Corona, CA, and EBS relied on SafetyStepTD, a flexible mat system developed seven years ago by CEO Mike Menendez, that can be applied on both concrete and asphalt.

While installer Derrick Speerstra had used the product before, he had never tackled a project like this one with radiuses as long as 75 ft. In addition, the pavement was porous asphalt, which presents a more open surface due to large gaps between the aggregate that allow water to drain – and therefore presents less contact surface to bond to an adhesive.

It is a three-part system that’s built up on-site. The base is a flexible fiberglass-reinforced mat studded with polymer-modified concrete domes. The mat gets overcoated with sand for slip resistance, then overcoated again with colored sealer. The installed system is less than 1/16 in. high between domes, plus an additional .2 inches of dome height.

The mat comes standard in 36-in.-wide lengths of 8 ft. and 10 ft., but the company also offers custom sizes. It can be cut with a utility knife or hand shears to conform to the profile of a sidewalk or fit around obstacles such as bollards or light poles. Mats can be laid end-to-end for long runs, and application of the subsequent layers leaves a jointless finished surface.

Simple cutting and fitting is where Speerstra saw a clear advantage of the system. Fitting rigid tiles to radiused curbs requires slicing them into trapezoidal wedges to approximate the curve. The off-angle slicing plays havoc with dome-spacing and alignment, making wheelchair passage more difficult.  It also sometimes results in half-domes, which can be a trip hazard. Flexible mats can be cut as needed to keep the lines of domes straight and parallel, and still have the mat edge conform smoothly to the radius. In places where a cut would go through a dome, the entire dome gets removed from the mat with a knife blade.

Once the mat is cut, the area around it is masked with tape. The mat is set aside while the adhesive base coat is spread on the pavement with a 1/8 in. notch trowel. The base coat reportedly adheres equally well to substrate and mat.

Speerstra cautions that it’s important not to spread the base coat onto the masking tape, or to wipe it off soon if it slops over. He says that once the base coat dries it is tough enough that pulling masking tape can begin to lift the partially-cured mat with it. If base coat overage dries on the tape, slice the edge with a utility knife before pulling the tape.

Next the mat is aligned on the wet base coat and flattened with a push broom to insure a positive bond. Another layer of base coat is applied to the top of the mat using a ¾ in. nap roller. Slip-resistance grit (a special sand mixture) is broadcast onto the wet adhesive. Once that material is dry blow off un-bonded sand.

A color coat is then applied using a ¾ in. nap roller. It is available in six standard colors including Federal Yellow, as well as custom colors. The color coat is a thick, tough sealant similar in durability to the textured paint used to put lines on roadways.  Once the color coat is dry to the touch you can pull up the masking tape.

The final coat is a clear protective layer that can be either rolled on or applied with a garden sprayer. Allow one hour dry time for light traffic under normal conditions, 48 hours for heavy traffic.

Speerstra’s crew of five laid down 3,570 sq. ft. of warning surface in six days.  The jobsite was a challenge. The project was on a tight schedule, and Speerstra’s crew had to share the space with other trades. “We had guys putting up signs on top of us, and there were cranes moving park benches,” he says.

“The radiuses were large, 50-75 feet long,” he says. “They can design any radius they want and I can adapt this material to fit perfectly.”

The three layers of the system: On the left is the uncoated fiberglass-reinforced dome-mat; the polymer-modified concrete has been tinted blue to match the final color coat. The adhesive on the far left has been brushed over the mat edge to seal it.  In the center is the layer of sand for slip resistance.  At right is the color sealing layer, in disability blue.  Six standard colors and custom colors are made.

Two pieces of mat are cut to form a butt joint.  The cut joint is made at a control joint in the concrete to avoid having the mat bridge the substrate joint.  When the complete system it applied, the surface will be seamless.

The flexible mats can be cut with hand tools to conform to curves and fit around obstacles.  This utility box – from a different project – dramatically illustrates the versatility of the system.

Alignment of the lines of domes is important for wheelchair riders and pedestrians with walkers.  Keeping that alignment around a radiused curb is one of the advantages of a flexible mat over a rigid tile system.

Anatomy of a Dome

The latest version of the ADA Draft Guidelines (2005, section R304.1) states that detectable warnings shall consist of a surface of truncated domes aligned in a square or radial grid pattern.  The base of the dome must be from 0.9 in to 1.4 in diameter.  The top diameter must be at least 50% of the base, and at most 65%, and a minimum height of .2.  This insures that each dome will have a sloped side to minimize trip hazards. (If a dome cuts in half during field cutting, this would present a vertical edge that might be tall enough to be a trip hazard.)

An embedded tile detectable warning surface is generally installed flush with surrounding pavement.  A surface-applied system that is thicker than ¼” must be beveled at the edge, so that no more than ¼” vertical edge is exposed.

Spacing should be from a minimum of 1.6 inches to a maximum of 2.4 inches.  An earlier guideline had indicated 2.5 inches, but it has been superceded.  The spacing issue has caused considerable confusion.  Any product that falls within this range is compliant with ADA spacing guidelines, but individual owners or designers may have a specific spacing preference that will exclude some products.

Alignment of the rows of domes should be perpendicular to the interface between sidewalk, ramp, or landing and the roadway, or radial to the curved edge of the roadway.  The warning strip should be at least 24 inches in the direction of travel, and the full width of a curb ramp (exclusive of flares), landing, or blended transition.

The warning surface must contrast visually with adjacent gutter, street or highway, or walkway surfaces, either light-on-dark or dark-on-light.  Federal yellow is the color most commonly used on both concrete and asphalt.?