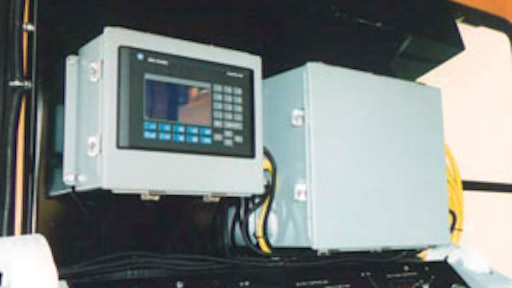 A truck-mounted, self-propelled, long-line striper can mark miles and miles of state and interstate highway every day. These complex machines have a variety of elements that must all work together to make smooth, straight, crisp, and clean lines. Some features of these machines may never change — speeds will remain the same, for example, because support crews can lay down cones to protect wet stripes only so fast. And while some trucks can carry up to 2,000 gallons of paint, there will always be a need for trucks that carry only a few hundred gallons of paint. But other characteristics of long-line stripers are developing with the introduction of new technologies and market demands.

One of the latest major advancements in truck-mounted striper technology is the data acquisition systems, or paint and bead monitoring systems. These systems have been around for about 10 years, but have only recently taken hold in the striper world with the increase in government agencies mandating that material usage be closely observed in order to properly achieve retroreflectivity directives set by the Federal Highway Administration (FHWA). Data acquisition systems give the operator a real-time readout of what he's putting down, as far as gallons of paint being applied per mile and glass beads per gallon of paint. The information is presented as a graph on a computer screen or a series of lights on a display, with green meaning you're on target and red meaning you have to adjust your system to reach your application goals.

"This system gives you an on-the-fly readout of what you're applying as you apply it," says Rob Krommendyk, product line manager for truck-mounted paint stripers at EZ-Liner Industries. "In the past, they've had to guess at it or count the number of glass bead bags it takes to refill the tank and calculate their usage that way."

Data acquisition systems can help contractors and government agencies alike save money and create a quality stripe for the end customer. They help eliminate the problems of paint being spread too thinly, which can take away from retroreflectivity and line life, and paint being laid on too thickly, which is expensive and could negatively affect retroreflectivity if the paint is so thick that the glass beads sink into it too much.

"We're seeing more and more specifications from government agencies to monitor material usage to ensure that applicators are in compliance with application specifications," Spielman says. "Data acquisition systems are expensive, and we're seeing resistance from contractors to install them unless they're mandated by the government agencies. However, we feel that it's such a strong tool for a striping truck operator to get a handle on their own costs and efficiencies of operating the unit that we think it's important to have these systems installed on every truck, even if it's not mandated by the government agencies."

"I haven't seen any studies on it," says John Loehrke, M-B Companies, Inc., "but I would imagine you probably pay for a system like that relatively quickly on the paint savings. If you're putting down as little as 10% or 15% more paint, you'd pay for that system easily within a year."

Loehrke also says these databases can be hooked into a GPS (global positioning system) or pavement temperature sensors, so these machines can capture an entire striping event in a datafile, which can be stored on a disk or personal computer for later review.

"Say you stripe a highway, and six months later you see for whatever reason those stripes didn't last like they should have. If you go back to this datafile captured by the monitoring system as you striped, it may have captured the GPS coordinates, the pavement temperature, humidity, the actual amount of paint that was being put down per hundred foot segment, the actual amount of glass, and so on. So it allows you to do a postmortem on the line after the fact that says what conditions weren't right such that the line didn't live up to expectations," Loehrke explains.

Driving a striping truck is no easy task. You have to make sure your truck is moving straight and smoothly down the road in order to produce a quality line. In recent years, there have been design improvements on long-line striper trucks that have made things easier for drivers. These "luxuries" include cruise control systems optimized at lower speeds, intercom systems that provide clear and full communication between drivers and the rest of the crew, and cab designs created with operator visibility in mind. Another feature that has made striping easier for the driver is the variety of guidance systems available today. There are five main types of line guidance systems available on the market:

Mechanical. The classic bar equipped with a swivel wheel that sticks out on the front of a truck. The driver watches the mechanical pointer ride along an existing line or guide marks for new line. The bar is collapsible and folds on the front bumper when not in use.

Optical. Bomb-style pointer that is mounted in front of the windshield on an adjustable bracket and lines up with a line like a gun sight.

Laser. A unit on the roof of the chassis cab shoots a green dot on the road that the driver lines up with an existing line or line guides.

Video. A camera pointed ahead at the line relays a visual onto a monitor in the chassis cab.

"We see the industry moving toward assisted guidance other than the mechanical pointer bar," he says. "A dangerous aspect to the old mechanical pointer bar is that it will precede the truck as you're going through an intersection and it's very easy to get struck by another vehicle and cause an accident, as opposed to a video or laser guidance system that has nothing protruding from the front of the truck."

Krommendyk explains that the optical sight seems to be decreasing in popularity due to operational advantages seen in newer style guide types.

"The biggest advantage of both the laser and the video over the optical is with the optical style pointer you can't really move your head as you drive, because once you move your head your line of sight changes and then to get your head back in exactly the same position is kind of difficult and you end up with a little wave in your line," he says.

The laser, video, and holograph systems are the newest to the market. M-B Companies's Loehrke says the holograph unit takes the idea behind the laser pointer a step further by using technology that the military has been using for years.

"The holographic vision system has a lot of benefits, where it is not susceptible to surrounding conditions, such as the brightness of the sun, the background, or the color of the pavement," Loehrke says. "This is a unique system from M-B. We offered the first units for sale in March or April. The system has been on the market for only a short time."

Truck-mounted stripers are less-expensive alternatives for contractors who want to break into the road-striping business. Many striper manufacturers make equipment similar to this Graco RoadLazer. Compatible with just about any full-sized pick-up truck, these truck-mounted stripers can be used to do any size striping job, including straight lines, curve lines, centers and sides, a temporary road in a construction zone, on ramps, off ramps, cross walks, legends, and premarking for tape or epoxies. "Typically, if someone has a truck they're going to want to dedicate that to their big jobs," says Jon Knutson, worldwide product marketing manager at Graco Inc. "If they need to do what I call more fill-in jobs, it's perfect because they can send it out with a one-man crew and they don't have to dedicate their big truck to a small job."