Properly preparing a concrete surface will help you achieve a lasting and professional striping job. 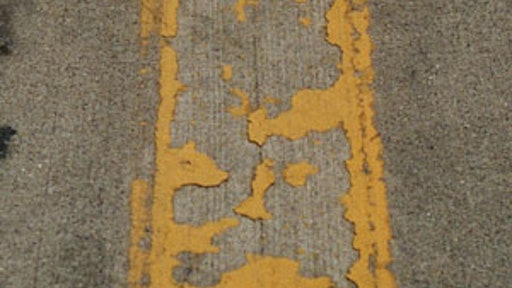 When making decisions to use concrete pavement instead of asphalt, business owners and municipalities look at cost, function, and durability when deliberating their options. Concrete is becoming an increasingly popular choice in sections of parking lots or gas stations because it is more resistant to the deteriorating effects of oil and gas leaks than asphalt is. In high-volume traffic areas such as fast-food restaurants, grocery store lots, or even tollways, concrete can stand up to the wear and tear presented by the frequent tire traffic.

After a business or government body chooses to use concrete paving, it is up to a striper to decide how to execute sharp, durable lines for the client.

When it comes to choosing the type of paint you are going to use, Tom Wood, national sales manager for highway products at Sherwin Williams, says that for the most part, people should use the type of paint they are used to. But he explains latex might have some advantages.

"My preference is the latex," says Wood. "Alkyds may have an actual reaction with fresh concrete's alkali surface, causing a silky surface interface. So that could cause problems with adhesion."

Craig Swafford, regulatory affairs coordinator at Seymour of Sycamore, a manufacturer of aerosol paints based in Illinois, says he see a lot of people using latex traffic paints.

From a chemist's view, Chad Payton, technical director at Allstates Coatings Co. says that it is more about what is in the paint than what kind of paint it is.

"All paints will work just fine for striping on concrete," he says. "But from a formulator's standpoint, you typically want to have your PVC content slightly lower. And what that means is you have more glue or binder content in proportion to your pigment content. That way you'll have a better chance of breaking through that chalky substrate that's on the top of concrete. The paint will stick better."

"The key with any surface preparation is to get down to a sound surface," says Wood. That means finding a surface that will allow sound paint adhesion. The following tips can help you achieve the best surface for striping concrete in a number of different situations.

Wait a month. Concrete typically takes 30 days to cure after it has been poured. Curing refers to the hydration process, or the chemical reaction between the water and the cement that takes place when concrete dries. Since paint won't adhere to a surface with a pH higher than 10, and freshly poured concrete typically has a pH of about 13, waiting to paint is the sound choice.

"Brand new concrete has a pH that is very alkaline," Swafford says. "Once the concrete cures for 30 days, you won't have a problem painting it."

Richard Lazarus, director of business development at Lafarge Road Marking, says, "Sand blasting or a light grinding for preparation is recommended to remove any traces of curing compounds and to roughen the surface."

"Usually you're going to remove the curing compound with something that abrades the surface," Wood says. "Either a shot blast, like a sandblasting, or an acid etch would work."

In an acid etch, a weak acid is applied to the concrete surface. The acid pulls up the first layer of concrete. Wood adds that it is important to wash off the acid etch and let the surface dry before painting.

Get rid of the dust. A concrete job that has not cured properly can have a dusting on the top of the surface, and paint has difficulty adhering to this dusty layer. This dust can foil your efforts to make paint adhere to the concrete. While sandblasting and washing with high-pressure air can help prepare a surface, scarifying will remove the very top layer of the cement, giving you a strong, clean surface the paint can bond with.

Rough it up. Paint will stick to concrete better if the surface has some texture to it.

If the concrete surface you're painting seems too smooth, however, try roughing it up with a light sandblasting or grinding. This is also suggested when painting a smooth trawl concrete in indoor heavy-traffic areas.

Have a stable bottom coat. If you want to stripe over existing lines on an older concrete surface, remember that the adhesion power of your top coat can only be as strong as the adhesion of your bottom coat.

"Preparation is very important," Lazarus says. "Make sure the old paint is adhered well and then restripe over it. Otherwise, do a light grinding before applying fresh paint."

Remove stains. Paint will not bond to a concrete surface where oil and gas stains are present. Remove those stains before painting.

"In some situations, such as a gas station where there is oil which is soaked deep down into the concrete, you may have to leech that out with an emulsifier in order for the paint to adhere," Swafford says.

When applied to concrete, emulsifier seeps under the surface to turn oil and grease into a soapy solution that can be rinsed away with water.

"Older concrete has a tendency to be oxidized, and it's going to be crumbly," he says. "So you're paint is only as good as the substrate you're putting it on top of. And if you put it on a bad substrate, then your paint is just going to lift with the substrate, because that's what it's adhered to."