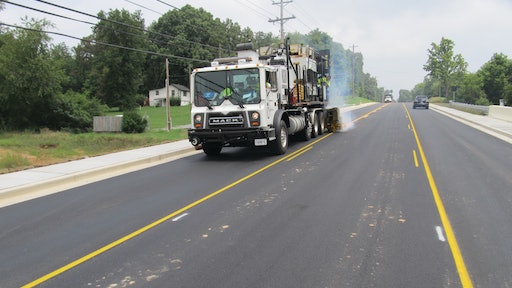 This past summer, RoadSafe Traffic Systems took on a project in Tennessee that restriped more than 3,600 lane miles stretching over 45 counties covering two regions. With projects varying from highways to county roads, project management and scheduling were crucial to meeting the Sept. 30, 2012 deadline.

The project was comprised of Region 1, Eastern Tennessee, and Region 2, East Central Tennessee. RoadSafe had one crew operate in each region consisting of 24 employees, and a RoadSafe manager would coordinate with the individual state engineer in the area.

This contract was separated into two pieces with the major portion consisting of performance-based restripe projects and the other portion for "call-out" purposes to repair markings. The restripe work consisted of 2,300 lane miles striped in a combination of 4-, 6- and 8-inch wide thermoplastic markings in Region 1. In Region 2, more than 1,300 lane miles of 6-inch wide thermoplastic markings were applied. RoadSafe operated a MRL thermoplastic truck putting down a 40-mil spray.

For the performance-based portion of this project, RoadSafe was required to meet state specifications of reflectivity. "The reflectivity of the markings must maintain a particular standard," says Kathleen Holst, senior vice president of RoadSafe. "For the motorist, that means the utmost in visability for the lane markings. About 30 days after we lay the lines we need to ensure our work meets quality standards and that the reflectivity of the stripes is not only immediate but can be maintained for a period of time."

To maintain the required quality of retroreflectivity, the trucks and equipment are calibrated so the correct amount of beads are installed in the liquid marking as well as properly imbedded into the paint. RoadSafe also runs test plates to make sure the right millage and reflectivity is met. Crew members follow behind the trucks each night to take reflectivity readings.

"They have 30 days to measure the reflectivity in the whole county," says Mark Long, general manager of RoadSafe Traffic Systems. "The clock starts 45 days after we're finished striping the county. After that 30 days, our markings need to comply with certain reflectivity standards, one for  the yellow stripes and another for  the white."

Due to the expansive area, crews would operate on a seven day schedule allowing extra time in case of weather or mechanical breakdowns. "Weather is always the biggest challenge," Long says. "Rain is our biggest enemy with regards to throwing the production schedule off, and you can lose three to four days. Since the crews are traveling, if we know it will rain for a few days we can shut down and send them back home."

RoadSafe also makes sure the crews are flexible to adjust their schedules due to weather. "Sometimes it's a moving target for us," Long says. "We have to be flexible and nimble enough to move to unscheduled areas. If we see rain in the northeast corner for three days we will mobilize our crew and go in the other direction. Because of the time frame, we have to keep the trucks going."

Because crews worked on different types of roads the number of lane miles completed per day varied from section to section. "It depends on the roadway," Long says. "The amount striped is dictated by where the roads are and what we are able to do. We probably averaged about 35-50 miles or so per shift. Some of these roads are in towns, and you can't predict you're going to be on a wide open road where the lack of intersections, traffic and congestion allow for quicker production rates."

As for safety, RoadSafe conducts regularly scheduled safety meetings. "We hold daily safety briefings identifying the job hazards and raising awareness to jobsite issues making our workers aware of their environment," Holst says. "We also regularly remind our workers to stop work if they feel they are in unsafe conditions and remain stopped until the condition is corrected, the right to do so being available to every RoadSafe employee." Additionally, strict policy enforcement exists for proper PPE at all times and for all conditions.

The crews would operate the night work from 8 p.m. to 6 a.m. Work was completed both during the week and the weekend unless a large event was scheduled resulting in additional traffic.

Another important aspect of the night work portions of the project includes coordinating with local police. "Police escorts are also provided at night for the expressway projects," Long says. "We have a presence with the State Troopers helping us control traffic and keep speeds down."

Several steps are taken to prepare for expressway work with the state troopers. "We notify the state in advance that we're going to be working on the expressways," Long says. "We give them 3-5 day window of advance notice, they organize the troopers, and the state construction engineer is also on site. For efficiency, we try to string together the expressway projects."

Due to the heavy traffic of the expressway projects, it was essential for Long and his crews to determine the number of lane miles and the amount of work that can be completed each night. By having the work planned between two mile markers crews were also able to determine the next night of work.

As for the striping of the expressways, crews used a mobile operation with a truck-mounted attenuator. "The product we put down has a fairly fast dry time," Long says. "You can put it down at a rate of 7 mph. You'll put it down, it will dry, and then you'll follow behind with the truck-mounted attenuator. The police troopers are also there, so it's a long solid, rolling production train."

In some situations, additional trucks would be used if there was concern over the line or intense traffic. After the paint is applied, traffic is kept off for several minutes to allow enough time to dry.

Working on the call-outs

The second part of the contract required RoadSafe to complete several pay items such as pre-formed plastic, school symbols, thermoplastic, turn arrows and stop bars. "The state put unit pricing in the contract, and we are paid for each call out," Long says. "So, if they call us outside the performance restripe it would be on a separate project. You don't know going into the bid whether they're going to use all or any of the units."

The state would contact RoadSafe within 30 days with a call out project. Since the two crews were busy completing the performance-base restripe, a third crew would complete the call outs. "It is handled by a separate crew because at the time of the restripe we don't know what needs to be done," Long says. "Often times we send out a different crew to handle the on-call work."

A Summer of 80 Million Linear Feet