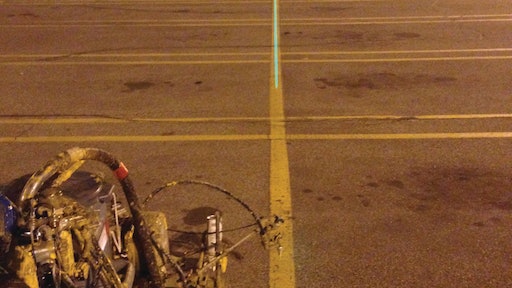 The laser is easily visibile at night and on cloudy days.

Based on Superior Striping’s experience, using lasers for layout guidance is likely to become a real game changer in the pavement marking industry – much like the impact made by the Lazy Liner and LineDriver equipment.

Those pieces of equipment not only reduced operator fatigue, enabling crews to be as productive late in the day as they are early in the morning, but they eased the striping process, made it faster for workers to move around the jobsite and sped up the job – meaning more jobs could be handled by the same crew (or smaller crews) so more work could be handled in a season.

And while lasers have been around the industry for a few years, most of them have shot a spot ahead of the striper. The striper operator would aim toward that spot and stripe right at it. Because the spot was set X number of feet ahead of the striper the operator could continue striping as long as he needed to, just by keeping an eye on the laser dot.

“We tried that for a while but we just weren’t comfortable aiming at a dot that kept moving,” says Chad Jung, striping foreman at Superior Striping, Ramsey, MN. “Because it moved with the striper it was hard to keep the line straight. There were some benefits to it, for example we thought it was okay on an 18-ft. line, but you couldn’t do a 36-ft. or 40-ft. line with it. We felt we could never really see where we should be painting.”

So after using a dot laser for a while Superior Striping reverted to its standard stringline layout method with two workers holding the stringline while the third worker painted the stripe.

But last year they went back to the laser because they found one that as a result of a change of lenses (on a laser used on long-line striping trucks) shot a green beam that was visible to 150 feet at night and on cloudy days. The result, Jung says, has transformed the on-the-job efficiency of Superior Striping’s crews, reduced crew size and even improved job quality by enabling straighter striped lines.

Started by Tom Frederickson and Jeff Gustafson in 1991, Superior Striping in Ramsey, MN, generates 95% of its work from commercial properties and stripes 2200 parking lots a year in the Twin Cities area. While the company does subcontract work for a number of paving, sealcoating and even sweeping companies, most of its work comes through property managers. The contractor relies on a Graco-focused fleet of 16 LineDrivers, 20 LineLazers, 5 stand up machines, 4 GrindLazers and about 35 JCL/Kelly-Creswell air stripers.

How the Laser Eases Striping

Jung says the cost of the first laser they used a few years ago was $3000, but a new version designed specifically for parking lot striping is now available for around $1000. And where the $3000 laser drained 4 amps from a marine battery, enabling it to be used up to 12 hours on a single charge, the new model uses only one-tenth of 1 amp and can run for 50 hours on a single battery charge.

“When we started and it cost $3000 we had to ask ourselves did we really want to outfit eight stripers at $3000 each, but we eventually did. It saves us that much time – and more,” he says.

Jung says that using the laser doesn’t take the measurement out of layout but it does eliminate chalking or stringline use.

“With the laser we’ll come in and do single rows all the way around the parking lot and then we’ll do the doubles. We mark our Ts on the ground, just the stop and start Ts, and we can see where the stripes are going to go. If the laser doesn’t line up with the Ts you can see right away that your marks are off. It prevents you from painting a line that’s off.”

He says the laser is easy to mount on the bar about two feet behind the spray gun. Once the laser is attached it must be lined up so the beam it projects is straight. Jung says the easiest way to line the laser with the spray gun is to use the joint where asphalt pavement meets the concrete curb line because that line is generally straight.

“We roll the machine in place just like we’re going to paint that crack where the asphalt meets the concrete, and we line up the laser with the gun. Then we roll it again and line up the laser again to confirm that its straight, and then we do it a third time. Once we get it set it really doesn’t need to be adjusted.”

He says that because it’s so easy to line-up the laser it’s also easy to switch the laser from one machine to another.

“But that’s usually not an issue because once operators get a chance to use the laser they all want one on their machine,” he says. “Once one guy has one everyone has to have one, they’re that much easier to work with,” Jung says.

Assume the parking lot contains 100 stalls with single rows around the perimeter and one set of double rows in the middle.

Step 1. Layout using a tape measure the stop and start marks for all 9-foot stalls in both the single rows and double rows.

Step 2. Measure and mark the centerline. Because Superior Striping uses a laser they mark every 50 or 100 feet of centerline depending, Jung says, on the flatness of the pavement. “If it’s flat we can mark at 100 feet because the laser easily shoots that far. If the pavement goes up and down, or if there’s a drain in the way with a deep dip then we’ll mark on both the front and back of the drain too,” he says.

Step 3. Stripe the single stalls all the way around the lot.

Step 4. With the machine backed up right to the start of the first line in the double row, line up the laser with the stop and start at each end. “We used to place a mark in the center but because of the laser we don’t need to anymore,” Jung says. “The laser is so straight it’s giving us the straightest work we’ve ever done. We can easily paint 100 feet with the laser.”

Jung says a good example of what use of lasers enables a contractor to do was a 2013 Wal-Mart striping job that required layout on new asphalt. The lot had 840 stalls and Jung went out and laid out every stop and start line for the entire parking lot during the day.

“Then we came in at midnight to paint the lines but a neighbor complained about the noise so we had to shut it down,” he says. “That same morning we started back up painting at 7:00 with four guys and four machines with lasers and by 8:45 we were done striping 840 stalls. A complete new layout was painted in 1 hour, 45 minutes.”

He estimates that the Wal-Mart job would have taken 10 hours just to stripe using the traditional stringline method with the same four people.

“Typically I would have had one striper and two guys moving the stringline as they go,” Jung says. “With using the laser we just eliminated two guys on the stringline and can now put those two guys doing something else, even on another striper.

“Because of the lasers we were able to take a huge layout job that takes everyone so long to layout and we basically turned it into a restripe. That was a real eye-opener for us as far as how fast we could get done with a job using lasers.”

And as far as restriping of sealcoating jobs goes, Jung says the laser makes those easier while improving the finished look.

“On restripes you can often see the old lines but it’s hard to see the starts and stops.”

So Superior Striping has begun using its auto-layout machines outfitted with a laser to redo the stripe starts and stops on newly sealcoated parking lots. They begin by locating an end stripe, then measuring the 18-foot length and marking a T at the start. They repeat that effort on the other end of the bay, resulting in two start points marked with Ts.

The operator then lines up the laser on an auto-layout striper, shoots the beam to connect the two T marks, and then moves across the bay spraying a dot at programmed distances. The dots are the start marks for each stripe and because they were sprayed along the laser beam they all are even.

“It’s all lined up and all the stripes stop and start at the same distance and the whole job looks better. All our restripes look better,” Jung says. “The work goes quicker, and we’re even able to fix any imperfections in the original lines in the lot, where they might have bowed because of wind or loose string for example. The laser shoots so straight it just eliminates any bow in any lines on the lot.”

A guide to entering the thermoplastic pavement marking business

Contractors have relied on Flex-A-Fill’s long-lasting performance for a variety of jobs. Now available In-store and online at Home Depot.
August 13, 2020
Latest