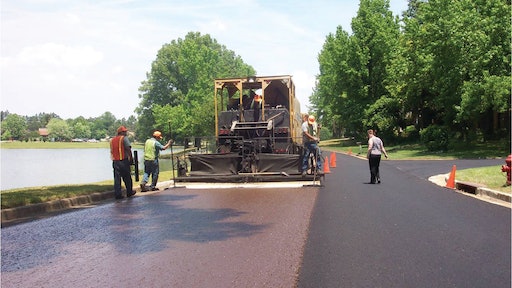 Slurry sealing can extend the life of the pavement 6-7 years when placed over pavements in good condition, 2-4 years for pavement in poor condition.

When it comes to the pavement below your feet, keep this in mind: preserve now, or pay later. Pavement preservation can be described as a proactive approach to protecting and maintaining existing pavements. There are several different options you can choose from when you’re pavement is in need of some maintenance. Not all options are suitable for all repairs, and you should judge each situation on a case by case basis to determine what option is best.

The following is breakdown of a few of the more popular surface treatment options out there and guidance on when to use what method. Pavement engineers are always looking for the right fix, on the right pavement at the right time. No matter what your preferred option of preservation is, we can all agree that preserving pavement now is a better option than letting it reach an irreparable state.

What:  Crack sealing/filling is usually done with liquid asphalt, cutbacks or emulsions and is considered only a temporary procedure. The process seals cracks against moisture and debris.

Where: Crack sealing maintains a tightly sealed crack only as long as the pavement remains stationary and the pavement is structurally sound. In climates with extreme temperatures, where expansion and contraction occurs often, resealing may be necessary every year. Sealing and filling should be done only on dry surfaces and when the temperature is above 40 F°, as cool temperatures cause the pavement to contract and open the crack. Traffic should not be allowed on the sealed cracks until sealant has cured.

Why:  Cracking in pavement is a pretty common and unavoidable type of damage found in asphalt pavement. The Asphalt Institute indicates that crack sealing/filling is the single most important pavement maintenance activity. Sealing cracks promptly helps to prevent water penetration which can accelerate the deterioration of the pavement and result in potholes and base failures.

Why not: According to the Asphalt Institute, sealing and filling cracks should not be done on a pavement that has significant structural problems as this option does not provide any structural improvement. If the pavement has base failures, severe rutting or fatigue (alligator) cracking, crack sealing/filling is not an appropriate preservation option. An excess sealing application can reduce a pavement’s skid resistance and create a poor visual appearance.

Preservation prognosis: Crack sealing/filling can extend the life of the pavement 3-4 years when placed over pavements in good condition, 0-2 years for pavement in poor condition.

What: During the chip seal process, a binder is sprayed on the pavement surface and aggregate is immediately placed over it. The surface is rolled and curing occurs between the aggregate and the binder. The surface is then swept to remove any loose aggregate.

Where: On structurally sound pavement with only minor surface defects.

Why: Chip seals are used to address aged, cracked and raveled surfaces. They protect pavements from sunlight, rain and snow. They reduce water penetration, inhibit raveling, improve frictional characteristics of mildly bleeding pavements and extend the life of the pavement.

Why not:  A pavement with stripping problems should not be chip-sealed as it can accelerate the stripping. Chip seals are not appropriate over rutted, potholed or severely distressed surfaces.

Preservation prognosis: Chip sealing can extend the life of the pavement 6-8 years when placed over pavements in good condition, 3-4 years for pavement in poor condition.

What: These treatments are thin, emulsion-based seals placed on pavements with minor deterioration. The black surface protects and prolongs the life of good pavements and corrects low severity surface defects.

Where: Slurry seals are good for aging asphalt pavements in good structural condition with only minor cracks or raveling and where there has not been a loss of skid resistance.

Why: This treatment seals and waterproofs the surface while filling in minor cracks and re-storing aesthetic appeal at a relatively low cost.

Why not: Slurry seals should not be placed on thicker lifts as appropriate curing may not be achieved. Traffic in a treated area needs to be removed for up to 8 hours. Mixing equipment for a slurry seal is needed onsite to combine the components. Not appropriate for pavements with severe surface distress.

Preservation prognosis: Slurry sealing can extend the life of the pavement 6-7 years when placed over pavements in good condition, 2-4 years for pavement in poor condition.

What: Micro surfacing is an enhanced version of a slurry seal composed of a mixture of a catatonic polymer modified asphalt emulsion, aggregate, mineral filler, water and additives.

Where: Micro surfacing can be placed in multiple courses for rut-filling on pavements in good structural condition.

Why: This treatment, with its’ strict specifications, yield a high performance surface that corrects minor surface irregularities, fills ruts and cures quickly for a traffic return in less than an hour. It is known to last longer than slurry seals and can be used in lower temperatures.

Why not: The cost to preserve the pavement using micro surfacing is higher than slurry or chip sealing.

Preservation prognosis: Micro surfacing sealing can extend the life of the pavement 6-8 years when placed over pavements in good condition, 2-5 years for pavement in poor condition.

What: A spray of diluted asphalt or rejuvenator emulsion is applied to the surface of the asphalt. This delays further oxidation, weathering and raveling. Is seals micro-cracks and is a very low cost pavement preservation treatment.

Where: Fog seals can be used on pavement in good condition that is structurally sound.

Why: This preservation option is very lost cost and easy to apply. Fog seals replace asphalt that has worn off the surface to reduce raveling, waterproof the surface, rejuvenate and protect from UV aging.

Why not: The lifespan for fog sealing is considered less than other treatment options. They should not be used on pavements surfaces with moderate or severe distress. Pavements with poor skid resistance or rutting are also not good candidates for fog sealing.

Preservation prognosis: Fog sealing can extend the life of the pavement 4-5 years when placed over pavements in good condition and is not recommended for pavement in poor condition.

What: Asphalt and aggregate are placed over aging pavements. The liquid asphalt binds the rocks together to create a strong structure.

Where: Over pavements with good structure that may have minor cracking, weathering, friction loss and rutting problems.

Why: Thin overlays have become one of the most effective and more common pavement preservation treatments out there. They seal and protect the existing pavement, correct deficiencies in the surface and improve friction. Not good for pavements with fatigue cracking, significant rutting or other major deterioration.

Why not: If there are unsealed cracks, they will reflect through the overlay and even sealed cracks have potential to cause a problem. The cost associated with thin lift overlays is also more than some other treatments.

Preservation prognosis: Thin lift overlays can extend the life of the pavement 6-17 years when placed over pavements in good condition and 2-4 years for pavement in poor condition.

What: The goal of fine milling is to produce a new, precisely defined surface texture for a new layer of asphalt to bond to. Fine milling can produce an even pavement surface with excellent grip.

Where: Surfaces that have lost significant skid resistance or that have excessive wheel ruts. Underlying mix and base should still be in good condition.

Why not: Milling machines may not be readily available or the base under the pavement is too poor for a mill and thin overlay procedure.

Preservation prognosis: Fine texture milling can extend the life of the pavement 7-17 years when placed over pavements in good condition and 3-5 years for pavement in poor condition.

How to Add Cracksealing to Your Services