How to Construct a Walking Trail 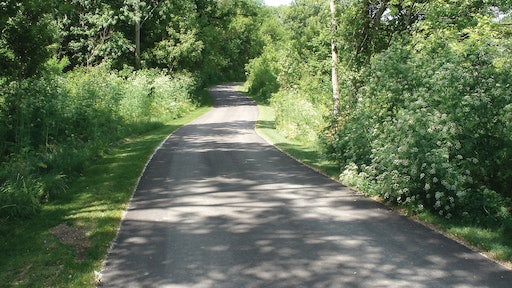 E&B was contracted to build a trail that ran .7 miles through an area that was completely covered in brush and trees, which wound along the river and under the Carroll Bridge.

Residents in the city of Wabash, IN, are used to seeing the beauty of the Wabash River as they drive in their cars along SR 15. In 2010, the city sought to encourage the public to get out of those cars and further take notice of the scenery of the Wabash River. They enlisted E&B Paving, with their 46 years of experience, to help extend the walking path along the Wabash Trail.

The area that E&B was contracted to construct was located along the north side of the river, east and west of SR 15. E&B was to extend the trail .7 miles through an area that was completely covered in brush and trees, which wound along the river and under the Carroll Bridge. They were also asked to enlarge, re-grade and pave the existing stone parking lot and boat launch on Smith St.

The project was not without challenges. “The initial staking of the placement of the trail was the first challenge,” says Gregg Koppelmann, sales/project manager for E&B Paving.  “We performed quite a bit of clearing in order to be able to place the trail.” It took approximately 7 days to clear the existing trees and vegetation for the new pathway. E&B worked with a four man crew from Quality Services to accomplish the daunting task of clearing the area before paving could be done.

Quality Services brought in a boom lift to clear out the larger trees from the area before using a stump grinder, Bobcat and wood chipper to break down the rest. The material was transported to a landfill to be ground up and used for mulch. After the clearing was complete, E & B spent approximately 2 weeks cutting the trail to grade to place the stone and asphalt using just a four man crew. The survey company, Randall Miller and Associates, worked at one end of the trail and had to cut their way through the area to place stakes.

Then the next challenge presented itself. Sheet piling was originally designed to be installed along the river bank. These long pieces of interlocking corrugated metal were to act as a retaining wall between the grass and the path. However, when the crew began boring into the ground around the area to drop the sheet piling in, they were met with hard surface. “The existing debris appeared to be old bridge structure, concrete blocks, bricks and 2’ diameter rocks in the ground” says Koppelmann. Materials that would be too problematic for E&B to attempt the installation of sheet piles. “We had to redesign the project a little bit,” Koppelmann adds.

Concrete retaining walls had to be placed instead along the path area that ran under SR 15. “Between the city, the consulting firm (Butler, Fairman, & Seufert) and us, we came up with a suitable solution to fit all parties. Including cost, and being able to get the project done in a reasonable amount of time.”

Koppelmann says E&B Paving set goals of getting the job done on time, while minimalizing the damage to the surrounding areas along the river. Since E&B already had to extend the deadline due to the previous challenges they encountered, they were determined to keep the scenery along the river intact while completing the rest of the job.

“Getting equipment to the area to be asphalted was challenging,” Koppelmann says. “We wanted to minimize the damage caused by our equipment, so the asphalt trucks backed up to the paver at a further distance than typical to help minimize the damage to the surrounding area.”

Since the trail was only 12-foot wide, there was no way for vehicles to go around each other without damaging the surrounding area. Instead of the normal paving train where a paver pushes the dump truck forward, in this case the dump trucks actually backed their way down the trail to meet the paver. When one dump was empty, the paver would continue to move forward until it was empty, when another dump truck would show up after backing its way down the trail to the paver and roller.

“Ideally, you want to keep moving,” says Koppelmann. “We were able to work fast enough that there was no worry of cold joints or damage from the roller sitting too long in one spot.” Koppelmann indicated a new dump truck would show up with a load every 15 minutes.

The heavy equipment they had to carefully maneuver down this tiny 12-foot wide path? A Dynapac 90 Dirt/Stone Roller, Caterpillar Backhoe 420F, CAT Grader 140G, CAT Excavator 312 and CAT Roller CB-24, along with a Roadtec Paver RP-150. Through diligence of the crew, they were able to accomplish the goal of minimally disrupting the area around the path that was being constructed.

E&B also re-graded and enlarged the stone boat ramp and parking lot. By readjusting the grades and double checking elevations, they were able to ensure the new pavement would fall in the right direction. This helps extend the life of the ramp as a proper grade allows water to drain properly so there would be no standing water. The parking lot was increased by more than 55 square feet and the boat ramp now measures 45 feet x 55 feet, up from the initial 30 feet x 30 feet.

Koppelmann indicated they stayed on schedule, despite the setbacks, by making sure they had a full days’ worth of work available to place asphalt. “There was a true partnership between the city of Wabash, the engineering and consulting firm and us to keep this project moving at a steady pace and to keep the project as cost efficient as possible for the city,” Koppelmann says.

The project, which finished in June 2012, received a National Asphalt Pavement Association Quality in Construction Award for 2012. “We take pride in winning those awards,” adds Koppelmann. “We try to do our best to instill quality in all our crews out in the field.”

Survival for Petra Paving depended on learning and implementing what it didn’t know.
Allan Heydorn
January 4, 2016
Follow Us