How to Sealcoat a Big Job in a Short Time 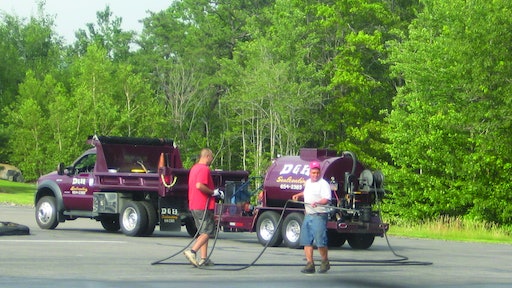 D&H Asphalt Sealcoating has been in business for 14 years, and co-owners Mark LaVerdi and Donna Haggerty have kept the company small. But that hasn't kept them from pursing large jobs.

The Wilkes Barre, PA, company offers sealcoating, crackfilling, line striping, and snow plowing with 60% of the customers being on the residential side and the other 40% commercial, LaVerdi says.

In Spring 2010, the company took its four-person crew to complete a 300,000-sq.-ft. office complex parking lot sealcoat application in Scranton, PA. But the challenge wasn't tackling such a large job with a small crew. LaVerdi and crew had to complete 192,000 sq. ft. of the job over the Memorial Day weekend. "I've done big jobs before," LaVerdi says, "but not in such a short time frame. And I've never put down that much sealcoat in one weekend."

The job called for a double sealcoat application. LaVerdi and crew prepped the job the night before sealing. Since it was a holiday weekend, traffic control was not an issue.

The crew used Billy Goat blowers to remove debris from the parking lot. They blew out cracks with an air compressor and used a Marathon Equipment Inc. oil jacketed melter and MA10 banders to apply double tar applications to the cracks. "The pavement was only about seven years old so it wasn't in too bad of shape," LaVerdi says. Once the surface was clean the crew edged the parking lot with a layer of sealcoat, LaVerdi says.

D&H used a 700-gal. Seal-Rite sealcoating tank and 80/70 USA Tips spray tips to spray apply two coats of Star sealcoat. Because of hot temperatures, work started at 6:00 am and was finished by 2:00 pm each day. LaVerdi applied the one coat the first day and the second coat the next day. He was able to apply 4,000 gallons in just three and a half days, he says.

The sealer mix also contained a microflex additive to keep the sand suspended and to help the sealer dry quicker, LaVerdi says. The mix contained 3 ½ lbs. of sand per pound of sealer.

In that first portion of the job, the entire area being sealed was bordered by curbing, which the crew had to be extra careful around. While LaVerdi sprayed the lot another crew member followed along holding a spray shield to prevent any overspray on the curb.

Although D&H does its own line striping, LaVerdi decided to sub out the striping for this particular job. "It was a little overwhelming with the amount of work needing to be done in one weekend so I subbed out the line work so it could get done in the time frame," LaVerdi says.

The remaining 108,000 sq. ft. of parking lot was sealed in mid-June. Since the office complex was not closed down, D&H had to use traffic cones to block and reroute traffic while working. "We took portions of the parking lot and worked on one at a time," LaVerdi says of the remaining area. He and his crew used the same prep and application process as on the first part of the job.

"For being as large as it was, the job went super smooth," LaVerdi says.

Meeting the Needs of High-end Clients