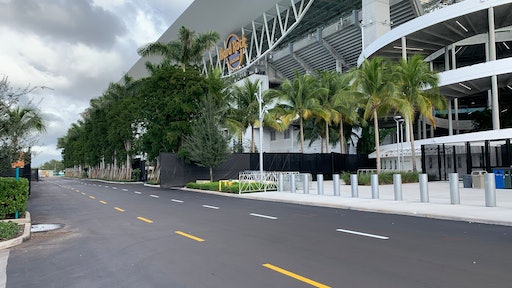 Everyone in the paving and pavement maintenance industry knows that each job you get requires a lot of perseverance and a little bit of luck.

When it came to completing the work to prepare the parking lot at Hard Rock Stadium in advance of the biggest television event of the year, Nick Small, owner of U.S. Pave, relied on his persistence to make sure his crew would win the work.

"Hard Rock Stadium in Miami has been a big part of my life. I grew up watching this stadium being built, I worked there when I was in high school and I have season tickets to the Dolphins," Small said. "When they announced the 2020 Super Bowl was going to be located at this stadium, I knew they were going to need maintenance work done and I didn't want any other crew but mine completing the job."

During preparation for the Super Bowl, Hard Rock Stadium underwent several changes and as a result, there were construction trailers camped out around the area. Small decided to go knock on every door to see if he could get in contact with the right person to bid the parking lot maintenance work.

"I would just show up and knock on doors," Small said. "I kept trying to find the person in charge of parking lot maintenance and it took two weeks before I was finally put in contact with the Director of Parking who would make any decisions on the lot maintenance."

Here's where a little bit of luck came in for U.S. Pave: The stadium had just put out bids for the sealcoating that needed to be done and Small knew this was his opportunity to win the work.

"I drove around the lot with the Director of Parking and explained to him how we would do the work if we were awarded the contract," he said. "At the end of the day, he decided to go with our company. I can say with certainty that no one in the business could have done a better job on this lot than our crew did."

Between the end of football season and the Super Bowl, the U.S. Pave crew was given just one week to get the work done.

U.S. Pave, based out of Fort Lauderdale, FL,  operates four crews to complete work all over the state. Small brought all his crew members to this one job to make sure they would complete the work within the tight time frame.

"We showed up with an army," Small said.

In all, U.S. Pave had 42 crew members on site, 20 tanker trucks full of sealer and completed 1.2 million square feet of sealcoating in just three days. That's over 37,000 gallons of sealer.

Working in their favor to complete the work so quickly, was the lack of traffic around the stadium. Crews did not have to section off areas of the lot and deploy heavy traffic control to keep cars off the freshly sealed areas.

"We were lucky to have free rein around the stadium," Small said. "Despite being rained out one day, it was a very smooth running project and that's a testament to our crew and the planning we had in place prior to the work."

An Unexpected Side Project

Just five days before the U.S. Pave crew were getting ready to enjoy seeing their hard work on display during the Super Bowl, Small received a panicked phone call from the Director of Parking.

"In preparation for the crowd control, the stadium had built new pedestrian tunnels for attendees to walk to and from the stadium but there was nowhere to walk from the exit for the stadium to the tunnel," Small said. "At 6 p.m. the Wednesday before kickoff of the Super Bowl, I got the call that they needed a new pedestrian walking path installed to fix this issue."

The next day, Small pulled his crew off another job to complete this work. The crew dug the area out, prepped it and poured the concrete and were out of there by Saturday.

"It would have taken any other crew two weeks to complete a project like that and we did it in three days," Small said.

And as the crew watched the Super Bowl the next day, they knew their hard work had paid off.

"It's a huge sense of pride for me and my crew," Small said. "We have been contacted by the stadium again and again since this project to complete other maintenance jobs and it's because of our professionalism and dedication to our work that they keep calling us. If they need us there tomorrow, we'll be there tomorrow. That's how important keeping a high profile project like this is to our company. This is our parking lot."