Advances in Alternative Fuels for Sweeping

Advances in technology mean CNG and LP fuels can power sweepers ? at a cost. 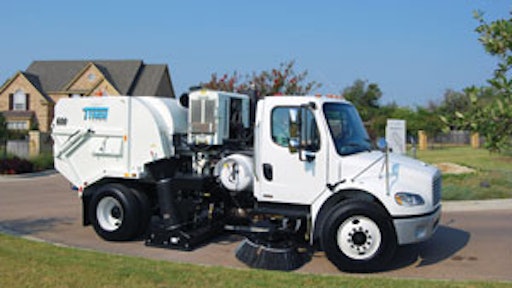 Filling a sweeper with compressed natural gas can be a little slow, and it can take all night to fill up a sweeper at a slow fill station. Some of the bigger fleets, such as those operated by Los Angeles, rely on a fast-fill station where large tanks are already filled with pre-compressed natural gas, so operators simply fill sweepers from the one big tank; they don't have to compress the gas first.

Sweeping equipment powered by alternative fuels has been available to contractors and public agencies for almost 25 years, but its use has not caught on, mainly because alternative fueled sweepers are significantly more expensive than diesel-powered equipment.

But recent attention to the environment combined with last year's spike in oil prices, the future uncertainty of fuel prices, and advances in technology have brought more attention to sweepers powered by alternative fuels. And while they are still among the priciest of sweepers, vehicles powered by alternative fuels such as compressed natural gas (CNG) or liquid propane (LP) are available to contractors or public agencies.

Brian Giles, sweeper products manager for Elgin Sweeper, and Tom Rokas, Tymco inside sales, say the vast majority of sweepers sold in the U.S. still use diesel fuel. Giles estimates that perhaps up to 7% of the market buys alternative fueled sweepers, and he estimates that if all positive projections come true that figure might reach 12% of sales in 2009.

"A lot of governing bodies are talking big but it remains to be seen if they'll actually come through and pull the trigger," Giles says. He says alternative fueled vehicles are sold more frequently to public agencies than to contractors, largely because they are more expensive equipment. "It's a large up-front investment, nearing $300,000 for a new unit, so a contractor looking to buy one might consider a secondary market before investing in brand new unit - unless of course the market or a client demands it," Giles says.

Rokas says that while most units Tymco sells are to public agencies, it does sell sweepers powered by alternative fuels to contract sweepers throughout the country. Rokas says Tymco's alternative fueled sweepers, which can cost upwards of $250,000, are often sold to contractors in regions where air pollution is particularly severe or where public agencies require their own fleets to be fueled by something other than diesel. In those instances a contractor buys an alternative fueled sweeper to better fit with whatever the municipal or regional requirements are.

Elgin introduced its first CNG sweeper, an Eagle, to Calgary, Alberta, in 1998. But despite the fact that there was some interest in running a CNG sweeper, technology hadn't caught up with the interest, so the unit didn't run as well as expected. Giles says Elgin slowed its pursuit of the CNG-powered sweeper market until California passed its anti-diesel regulation.

"Once that happened we started seeing interest and sales pick up, so we got more involved in the market," Giles says. "Even though the law didn't say they should do it, we started to see leakage into surrounding areas, seeing municipalities outside the AQMD ordering one or two alternative fueled machines."

Manufacturers say they have seen increased interest in alternative fueled vehicles. Initially use of alternative fueled sweepers was driven by a desire to control or reduce emissions from municipal fleets. Giles and Rokas say that both propane and CNG have a smaller carbon footprint than diesel fuel and produce no smoke, soot, and less noise. Then came the rising cost of diesel, which a couple years ago was $1.70 a gallon and last summer was $4 a gallon, and sweepers powered by alternative fuels attracted more attention.

One stumbling block that slowed the development of alternative fueled sweepers was that for some time the interest was confined to California. With such a limited market most sweeper manufactures opted not to spend the time and money developing alternative fueled vehicles.

But that's not the only reason development was slowed. Technology had to develop to meet expectations, and today many of these technological problems have been overcome.

CNG, for example, is not as easy to burn as diesel fuel, and the same is true for propane, although to a lesser extent. "A clump of CNG outside in the air won't ignite in the air, and as it spreads out it passes through its burnable point so fast it won't burn then either. It just dissipates," Giles says. "You have to have the exact right proportion of gas and oxygen or the fire will just go out."

Years ago when manufacturers had to rely on a carburetor, adjusting it with screws to come up with the proper mixture, it was virtually impossible to maintain the proper mixture. It was not until the advent of computer-controlled engines that it really became feasible," Giles says.

Another problem overcome by technology is the size of the fuel storage tanks on sweepers. An old CNG tank would hold a maximum of 1,000 psi of gas, severely restricting the distance a sweeper could cover before it had to return to refuel. Advances in high pressure-tank technology enable manufacturers to offer tanks in a variety of sizes and configurations, so new tanks can hold as much as 3,600 psi - enabling the sweeper to operate over a longer range before having to return to the shop to refill. That means more lane miles (or more parking lots) swept, which means more efficiency and greater productivity.

But despite the fact that technology has made alternative fuels more viable for sweepers, the cost of an alternative fueled sweeper is driven sky high because few trucks are designed as CNG or propane-powered vehicles and must be modified as a CNG- or propane-fueled truck.

"What is driving what looks to be increased interest in these vehicles is the broader emphasis on environmentally sound technology, and that part of the equation is not likely to go away," Giles says. "The other element driving interest is fuel costs, and the fuel side of the equation could dry up in 30 days if diesel prices fall."