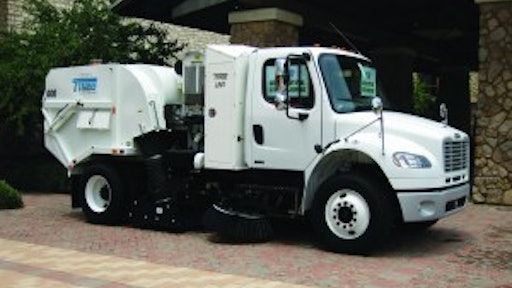 Alternative-fueled sweepers, at this point, are used mostly by municipalities and the government, but contract sweeper use is starting to grow. Alternative fuels include propane, compressed natural gas (CNG) and electric hybrids.

If you're interested in investing in an alternative-fueled sweeper there are a few things you need to know, and some questions you should ask the manufacturer - and yourself - before making a buying decision. "It's a changing environment and this is not an exact market, it's very unique," says Bobby Johnson, vice president of marketing with Tymco.

Fuel Options
Alternative fuel options include either propane, also known as liquefied petroleum gas (LPG), or compressed natural gas (CNG). "For contractors propane is probably the more popular choice," Giles says. "It is an easier alternative fuel to get in to." That's because propane is already used as a motor fuel source for other items, and it's easier to obtain propane than CNG.

"Propane is clean burning, readily available, and easier to install in the vehicle and replace," Giles says. Contractors have more engine choices and propane-fueled sweepers are maintenance friendly, he adds. But propane is a by-product of oil refining, and it is still considered a fossil fuel, so it might not be the greenest option.

Compressed natural gas is possibly the cleanest burning of all motor vehicle fuels, Giles says. CNG is a fossil fuel but it can also be produced as a by-product of decomposition of organic materials, he adds. Unlike propane, the infrastructure to obtain and refill CNG is not as readily available in the United States. Because CNG has to be compressed to a very high point, the fuel systems tends to be more expensive, but the high pressures do allow large on-board capacities and with that longer operating times, Giles says.

Although the fuel lasts longer, the CNG tanks eventually do need to be replaced, which adds a high maintenance cost to the vehicle.

Considerations
It's not as easy as just choosing a new fuel source. "Alternative-fueled sweepers cost as much to run and more to buy," Giles says. "You need to have something generating money for this investment."

Currently there are tax rebates and grants available to help alleviate the initial costs of purchasing one of these sweepers. Municipalities are taking full advantage of the grants, but contractors can look into the tax rebate options.

"The end user can get a sizeable tax rebate from the federal government for properly registered products," Massey says. The IRS website (www.irs.gov) can provide more information on the Alternative Motor Vehicle Credit.

Alternative fuels are not as readily available or as easy to refill as diesel or gasoline. For example, if you run out of propane or CNG while on a job you may have to travel a much greater distance to find fuel than you would for a diesel fueled sweeper. "The infrastructure for refueling is still not in place," says Chad Bormann, Allianz Sweeper Company national sales manager.

Before purchasing an alternative-fueled sweeper, ask yourself some questions. First, and most important, do you have the customers who will pay for this service? Can you charge more for your services? Will you be able to recoup the initial investment costs? If you don't have customers willing to pay extra, do you have a large enough customer base that you can still recoup the costs?

Along with what you can charge, ask yourself what you can save. Alternative-fueled sweepers generally have savings in better fuel economy and lower emissions, Bormann says. But will you be able to save on maintenance costs? And are you or your maintenance crew comfortable with the slightly different maintenance tasks these sweepers require? For example, CNG tanks will need to be inspected and routinely replaced when they expire. Will your maintenance crew be diligent in checking and replacing tanks?

Johnson suggests asking the sweeper manufacturer to explain and train you on proper alternative fuel engine maintenance and tank maintenance. Another source for proper maintenance can be the propane or CNG fuel suppliers and engine suppliers.

The type of unit you are looking to purchase is also a consideration. Are you sweeping roads or parking lots? Do you need a unit that travels at highway speeds or city speed limits, Bormann says. Typically, alternative-fueled sweepers are larger sweeping units, Johnson says. Most parking lot sweepers won't take the large street sweepers to do a small parking lot job. However, if you are a parking lot sweeper, an alternative-fueled street sweeper might help you bring in a new type of customer if the demand is there, Johnson adds.

Massey suggests contractors look at the fuel capacity as well - not just how much fuel it can carry, but is the fuel equivalent to the amount of fuel a diesel sweeper runs? Along with that, is the engine at least equal to the power you would get with a diesel engine?

Take a close look at the sweeper. Massey says alternative-fueled sweeper engines run at a higher temperature than diesel engines so contractors should make sure key sweeper components are properly insulated. Johnson says contractors should make sure they are not sacrificing capability or maneuverability when purchasing an alternative-fueled sweeper.

And finally, will the sweeper have a resale value. "Just because you thought the sweeper was great, there may not be an after market for it," Giles points out.

All these questions boil down to one overall consideration: Does alternative fuel fit into your overall company plan? Johnson encourages contractors to do their homework and investigate their market and their equipment options before making a purchasing decision.

Allianz Sweeper Company recently introduced its new electric hybrid sweeper, which the company built from the ground up, says Allianz National Sales Manager Chad Bormann. The prototype originally launched in September 2009. Currently, Bormann says the city of New York is testing the sweeper. The sweeper features a 200-hp diesel engine used to drive the hydraulic systems on the sweeping components and electric wheel motors used to propel the sweeper. The electric wheel motors are powered by a battery pack system which is charged through a generator on the unit. The battery pack recharges itself while the sweeper is in use, he says. Bormann says Allianz chose to create this diesel/electric hybrid sweeper for two reasons. First, the sweeper engine can be run at a lower rpm and therefore consume less fuel. Second, because it runs on diesel rather than propane or CNG the sweeper can be refueled at any standard diesel station.

Sweeper Options Can Match Each Job