What sweepers should know about the EPA's storm water runoff rules. 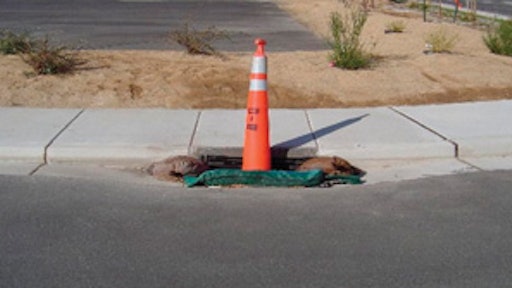 Storm water runoff is a huge source of pollution in the nation's waterways. In most cities, storm water is not treated, unlike the sewer system. This means everything storm water picks up before entering storm drains — litter, silts, oils off the streets, fertilizers off of lawns — is deposited straight into a community's rivers, lakes, and streams. Aware of the threat storm water poses to the country's water system, the Environmental Protection Agency (EPA) set up the National Pollutant Discharge Elimination System (NPDES) Storm Water Program to protect the country's waterways from pollution.

Since 1990, the EPA has mandated that construction sites larger than 5 acres and communities with storm water conveyances serving populations of more than 100,000 need to apply for an NPDES permit. Technically, these community storm water conveyance systems are called municipal separate storm sewer systems (MS4s). MS4s are required to develop a storm water quality management program.

On March 10, 2004, Phase II of the NPDES rule went into effect, expanding the regulations to include smaller communities and lowering the construction site threshold to 1 acre and greater. Construction sites smaller than 1 acre but part of a larger common plan of development must also abide by these rules.

Operators of construction sites subject to these rules must have a Storm Water Pollution Prevention Plan (SWPPP). The SWPPP must include a set of best management practices, or BMPs, specific for the site. Some BMPs are general housekeeping items, such as protecting garbage dumpsters from rain. Other BMPs are more directly targeted at minimizing the amount of exposed earth, helping storm water infiltrate the soil, or keeping sediment on site. In addition, BMPs can be temporary or structural.

The storm water rules set forth by the EPA are not just empty threats. In May 2004, the EPA came down on Wal-Mart with a $3.1 million fine for having inefficient storm water controls on 24 construction sites in nine states.

At the 2004 National Pavement Expo West, E. Terri Svetich, storm water coordinator for the Truckee Meadows, spoke about programs implemented in her area for storm water and air quality. The NPDES permit she implements was issued jointly to the cities of Reno and Sparks, Washoe County, and the Nevada Department of Transportation. This area, part of the Truckee River Watershed in the Sierra Nevada Mountains near Lake Tahoe, is collectively known as Truckee Meadows.

One particular BMP Svetich has seen contribute to a reduction in water pollution and air pollution in Truckee Meadows is street sweeping. The Truckee Meadows municipalities own their own sweeping trucks, conduct their own sweeping practices, and set street sweeping intervals specified by the Washoe County Air Quality Management Division. Using vacuum and regenerative air sweeper truck models helps the municipalities meet the air quality (PM10) requirements set by the EPA and reduce the amount of pollutants reaching the storm drain system.

During the winter months, street sweeping takes on another level of sediment control. Located in the Sierra Nevada Mountains, it is no surprise to learn that the Truckee Meadows gets its fair share of snow. And like other municipalities across the country, it has adopted a set of rules directly related to snow events to reduce the amount of sediment to waterways and the air.

In the Truckee Meadows they have done this by reducing the amount of sand used per lane mile by 50% while increasing the amount of sweeping to pick up the excess sand. By using sand strategically — reducing the amount laid on straightaways and concentrating sand lay down on curves and intersections — this has been implemented without affecting winter driving safety. The Truckee Meadows program also requires agencies to sweep up after a sanding event within four days or as soon as weather permits.

Some BMPs often used on construction sites that minimize erosion are laying straw or planting temporary vegetation to minimize erosion and help water soak into the soil. To keep sediment on site, silt fences and retention ponds are commonly used BMPs. Construction sites close to storm drain inlets might also place temporary fiber rolls or gravel bags in front of the drain, which would allow water to flow into the drain while filtering out sediment. Remember that BMPs are often very effective, but only if they are maintained properly.

Another effective BMP used to keep trucks and equipment from tracking sediment off site is minimizing the number of exits/entrances on the construction site and using tracking pads at those points of exit. Tracking pads are usually 50 feet x 100 feet and consist of a layer of filter fabric on top of the exposed soil with a 6-inch pad of 3-inch rock on top of the fabric. If sediment is still being tracked onto the road outside the tracking pad, regular sweeping of this area is needed.

Nationwide, building contractors often hire sweeping companies to keep their sites clean and in compliance with EPA regulations. It is important for contract sweepers to be aware of the EPA's storm water rules applicable in their individual areas so they can answer any regulation questions that come up when a construction company or industrial firm contracts them to do sweeping.

From a competitive standpoint it's also to a sweeper's advantage to know the EPA storm water rules. Construction contractors, industrial operations, and even homeowners associations are more likely to hire a sweeping company that can help them comply with EPA regulations, giving them piece of mind, than a sweeper who is ignorant of the rules.

Most people do not realize that storm water runoff does not go through their city's waste water treatment system. Homeowners need to know why they should not dump old paint into a storm drain, and homeowners associations need to realize the value of regular sweeping. That is why public outreach has become an important part of the Truckee Meadows program.

In an effort to educate the public on the issue of storm water, the Truckee Meadows sponsors disposal days for citizens to properly get rid of paint, lawn fertilizer, or other dangerous chemicals to keep them out of the storm water system. The Truckee Meadows has also held public storm drain stenciling events and done television and radio commercial campaigns. Svetich says these programs help people realize that runoff drains directly into their waterways.

As a street sweeper, it is beneficial for you to educate yourself, your employees, and your customers on the importance of keeping sediment out of your community's storm water system. Homeowners associations, shopping centers, and other customers will be more willing to pay for a service if they understand that sweeping is not just for aesthetic reasons, but is also helping the environment and will protect them from fines.

The Creature of the Night