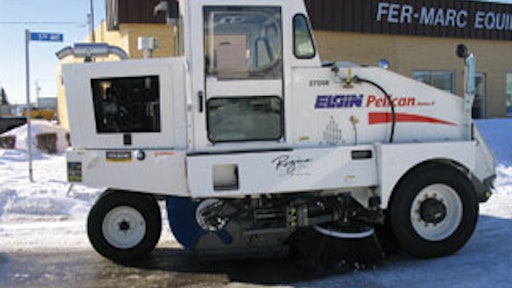 George Lonergan, owner of J&J Equipment in Brewerton, NY, estimates that in the most wintry climates of the United States upwards of 90% of the parking lot and street sweeping equipment hibernates for the winter. But you can't just drive your sweeper into your yard and park it.

"This is expensive equipment that needs to be taken care of or it won't work properly," says Lonergan, who markets the Tymco lines throughout upstate New York. "By taking care of your sweeper properly you can help extend the life of your investment."

One of the first decisions contract sweepers need to make is whether to shut down for the winter, essentially mothballing units until spring, or to sweep intermittently throughout the winter as weather allows.

"Some contractors, especially in places like Syracuse or Buffalo that get a lot of snow, just shut down," Lonergan says. "But in places like Albany that don't get as much snow, some sweepers will get out and sweep if the temperature gets into the upper 30s or low 40s. It makes the spring cleaning easier."

But whether you're shutting down your sweeping or trying to squeeze some extra work out of your machines during the winter months, you need to properly prepare your equipment for the cold. And your main concern should be the water used in your sweeper.

Water serves to suppress dust and acts as a lubricant, according to Gary Eatinger, customer service rep, Elgin Sweeper Co.

"On air machines water holds the dust down from side brooms so that could be considered an optional use," he says. "The pickup head, on the other hand, requires water in the suction hose at all times. Water acts as a lubricant of particulates going at great speed into the hopper."

Eatinger says that on mechanical units water is used to suppress dust on side and main brooms, but it's also a lubricant on the brooms.

"If you use water you will save a certain percentage of the life of the broom, they won't wear as fast," he says.

Eatinger says you can sweep without water provided the pavement is damp or not dusty. But contractors intent on sweeping without water need to understand what effect that will have on their equipment.

"The wear parts are going to be sacrificed at a higher-than-normal rate because you're taking sand or other particles and putting a great force behind it and it's hitting against the steel," Eatinger says. "Sweeping without water is like sand blasting all your wear parts."

Nevertheless, the first step in winterizing your sweepers is to drain all the water from them.

"We recommend sweepers stop using water in their sweepers by late November or certainly at the first freeze," Lonergan says. He says that while water won't freeze in the tanks over one night, if temperatures drop below 30 degrees F at night and don't warm back up during the day freezing can happen quickly, expanding the water and cracking the water tank. The same can happen to pumps (three customers last spring), which he says is costly, citing a $175 price tag on an electric pump and $1,100 for a belt-driven pump.

"You have to make sure to get the water out," Lonergan says.

Eatinger says the key is to make sure all the water is out of the lowest spots in the sweeper. He says most sweepers have a low plug, which contractors should remove to drain the water tank. Next remove the filter housing and the element, turn it upside down, and drain it. Once drained put it in the cab, not back in the sweeper. Then, climb in the cab and turn the valves off and on to help drain them as well.

"Most manufacturers these days try to avoid building low spots into their equipment so you drain everything down just like you would preparing a Wisconsin cabin for winter," he says. "The best way to build your cabin is to pitch all the pipes and if you do that you only have to open two valves, one for hot and one for cold, to drain the water to prepare the cabin for winter. Most sweepers are designed the same way."

He says Elgin's Whirlwind MV unit has an innovation enabling the contractor to hookup shop air to blow the system free of water.

"That makes it a lot easier," Eatinger says.

In addition to draining the water and performing standard vehicle winterization protection, here are 8 additional actions sweeping contractors should take to protect their equipment during the winter.

You can pave as long as the temperature is 45 degrees F and rising, but when it's too cold to pave it's best to store your paver indoors, according to Cameron Calder, vice president of sales at Calder Brothers Corporation. Follow standard maintenance procedures outlined in the maintenance section of the machine manual, then add two key procedures that don't need to be done during the season. "If your engine has a radiator on it, get that cleaned out," Calder says. "That doesn't necessarily mean getting the fluid flushed, it means getting the fins cleaned out. Otherwise, you roll into the peak of the summer and you may run into some overheating situations." Calder says contractors also should verify the heavy gear oil levels found in the gear reducer of the self-contained drive system. In areas of borderline paving temperatures nearly every day, Calder suggests storing your machine indoors so it will turn over quickly on a cold morning, and installing an extra-strong battery. "A paver is generally not a winter weather machine and therefore most manufacturers aren't going to put in a severe duty battery," he says. "So customers in the far north might find that something to help them on any of their hydraulic-powered equipment is upping the cold cranking amps on their batteries."

When It's Too Cold to Sealcoat...

Ground and air temperatures need to be at least 50 degrees F for a successful sealcoat, so Bill Dye, owner of Able Industries, suggests the following tips for preparing your sealcoating machinery for winter storage:

Storing Your Stripers and Striping in the Cold

"If temperatures are going to be below freezing, be careful not to leave water or other materials that can freeze sitting in the striper's fluid section," says Jon Knutson, worldwide product marketing manager at Graco Inc. "You can prevent these materials from remaining in your pump by running the system dry for 30 to 40 seconds after you're done flushing the striper. If you suspect that fluid may have frozen in your fluid section, be sure to bring the striper or its fluid section into a warm environment to completely thaw before you get started." To prepare your striper for extended storage first clean your pump with a compatible solvent — warm, soapy water if you use water-based paint, or the appropriate thinner if you use a solvent-based paint. "Once you've cleaned out the pump there are various fluids that you can pump into the fluid section," Knutson says. "These storage fluids are designed to have anti-corrosion properties and anti-freeze properties, so they're excellent for storing in the machine." Other tips: Grease all the fittings, such as hand levers or wheels; pack any bearings that may need it; clean the exterior of the striper with warm, soapy water; change the engine oil; and add a stabilizer to the gas, which will prevent the gas from varnishing.

Bundle Up Your Equipment from Old Man Winter