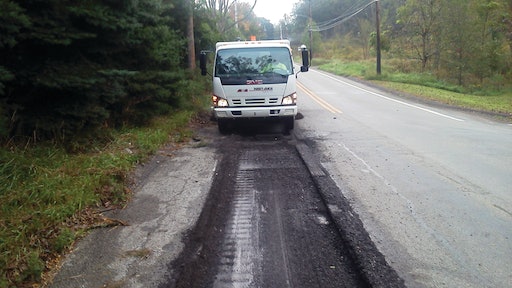 An ongoing milling and paving project in Pennsylvania’s Alleghany County got a productivity boost early this summer when a Stewart-Amos service manager and PennDOT job foreman put their heads together to improve the post-milling sweeping while speeding it up.

According to Mike Barringer, foreman, PennDOT Alleghany County, the project involved milling and repaving the 4-ft.-wide shoulder on roads throughout the county. Milling depth was 4 in. and as with all milling operations the milled area needed to be swept prior to paving. Once swept by a Stewart-Amos Starfire S-4, a Volvo asphalt widener spreads asphalt to the side where a blade directs it into the cut. A Hamm roller follows, and eventually the job is chip sealed for additional protection.

“The roads are still good but the edges of the road are failing in some spots and those are the areas they are fixing,” says Regis Drahos, service manager, Stewart-Amos.

Barringer adds that sometimes the road needs to be repaired as well, in which case a 4-ft. wide path is milled there too. “When we do the road and the shoulder we always do the shoulder first because the shoulder holds the road in,” he says, adding that 2 miles is the longest continuous stretch they milled and paved.

A Broom Too Big

The problem, according Drahos, was that the milling was 4 ft. wide but the broom on the back of the Starfire S-4 was 5 ft. wide – and couldn’t sit down into the cut. So the broom would sweep in the cut on an angle, with part of the broom resting on the unmilled paved surface, leaving part of the milled area unswept.

“He’d go one way with the broom and then he’d have to back the truck up and sweep down the other side of the hole, so he’s sweeping twice to get the hole cleaned for paving after milling,” Drahos says. Often the crew would have to drive back through the cut again and blow milled debris from it before paving could start. The process worked but it was slow and often slowed the paving operation.

“On some days we’d place 600 tons of hot mix and sometimes we’d be standing around waiting for the broom to make its second pass,” Barringer says.

Barringer says their first effort to improve sweeping was to put soft bristles on the side of the broom and remove the skids. “We took the skids off the sweeper so they don’t get bent off on the back and sides of the broom (where it sits into the milled hole),” he says.

While that improved the work somewhat it didn’t solve the problem. The broom was still sitting on an angle in the milled cut, sweeping still required two passes, and the sweeping wasn’t as effective. All in all a time-consuming an inefficient process.

Drahos says that he and Barringer started talking, wondering if there was a way to make the sweeping operation more efficient. “We were just talking about it and I thought maybe we could modify the brooms.”

Drahos went back to the shop and created a cardboard cutout he used to trim 6 in. off each side of the broom, effectively transforming a 5-ft. broom into a 4-ft. broom with notches on each end that would fit the milled area much better. He also trimmed the bristles by 5 3/8 in. so they would more effectively reach the bottom of the cut when the edges of the broom rested on the pavement.

The idea was that by cutting a section from each end instead of using only part of the broom to sweep, the entire broom would fit in the hole and reach all the way to the bottom, improving the sweep.

“The main part of the broom goes down into the hole and the 6 in. part on each end fits on the asphalt not milled and actually acts as a dirt shoe,” Drahos says. “The broom sweeps the bottom of the hole while the edges rest on the unmilled pavement on both sides, cleaning that as well.”

Drahos modified the broom in the shop, then brought it to the jobsite to test. “I brought the modified brooms to the site along with another normal set of brooms and I just said ‘Let’s give these a try and if they don’t work we can switch them right back to the regular broom.’”

And it worked, probably even better than expected.

Drahos says once he realized his approach was going to work he traded his cardboard cutout for a sheet metal template. After placing the template over a broom he marks the cuts with a marker and uses a cutoff wheel to make the trims. He says the entire process takes about an hour per broom and he has modified six this year.

“Now they can open up the hole with the milling, take the sweeper right behind the mill and follow that with the paver and the roller,” Drahos says. “A basic paving train.”

“It’s been a good running operation and with the modification we made with the broom now it really makes it smooth. Now we just make one pass and it’s a clean cut,” Barringer says. “It makes it easier on us so we can get more asphalt done in a day.”