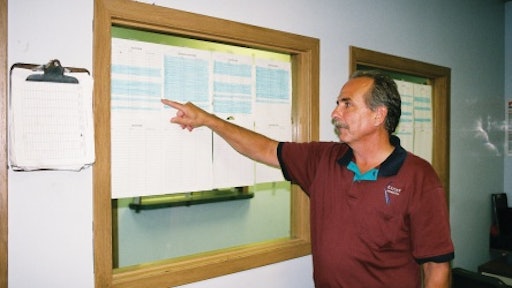 Larko started his own business in March 1986 cutting grass part time. Within six months he had purchased a competing lawn service company, tripling his size, and added full-service lawn care including chemical applications. After one year part time he quit his job and became a fulltime lawn service pro.

The beginning of the transformation into a sweeping company occurred a couple of years later when one customer asked him to pressure wash the property. “So I bought the equipment and started pressure washing at shopping centers, and it took off from there,” Larko says, and he added day porters soon after.

But he says the lawn maintenance industry began to undergo significant changes in the early 1990s so he sold off the lawn service part of the company, kept the pressure washing and day porter parts of the business, and in late 1996 he began to transform Katsam into the company it is today.

“Late in 1996 two of my best customers approached me independently and said ‘you do such good work have you ever thought of going into parking lot sweeping?’ I listen to my customers very well and heard what they were saying,” he says. “They were saying they wanted someone new in the market that would do something different. They obviously couldn’t get what they wanted from the providers at the time. “

So Larko did his due diligence and put the numbers together and went back to the two customers. “I told them ‘this is what I need to get from you to make the move into parking lot sweeping,’” he says. “They agreed to provide that as far as number of sweeps a week and dollars so I went out and bought a sweeper and in December 1996 I started sweeping eight properties, seven nights a week.”

That was the real start of today’s Katsam LLC, but it wasn’t the turning point.

“The real turning point for our sweeping business came in 1999, when one of our trucks ended upside down and totaled on Highway 70,” he says. “The seriousness of the accident made me question why I was in parking lot sweeping. I reviewed the financials of the sweeping operation to see if we were making money since I saw the end of my whole business on the highway -- and the answer was ‘Yes, it is making money so let’s grow it.”

It was at that point that Larko started aggressively pursuing and signing accounts. By 2001 he had three sweepers running every day (with a backup sweeper in the yard) servicing more than 50 accounts, most of which were seven-day-a-week sweeps.

“We were aggressive and it was growing and we continued adding on every year,” Larko says. “From 2001-2006 we averaged adding a truck a year. In 2006 we were running eight trucks every day and on weekends we ran two shifts with two or three trucks out during the day so as not to interfere with the night shift.”

In a plan that Jim Larko instituted in Katsam’s early days, each sweeper operator works four nights a week, 10 hours a day. Larko says their system is set up so that two drivers share a route and a vehicle, and the four-day-a-week schedule enables them to overlap and work together one day.

“In a perfect world Operator A and Operator B share one night a week in the truck where they do all the extra stuff on all the properties on that route -- dumpster enclosures, stairwells, islands etc. -- whatever is more difficult and time consuming. Doing those things on that one night can make the sweeps on the other nights go more smoothly, more easily and more quickly.

“In theory it should enable the two operators to develop a relationship and coordinate, and talk about the route and the job and each property, about how they each approach things on the job,” he says. “It was intended to give them an opportunity to exchange ideas, talk about what each should do. It was intended to essentially help them develop into a team and work as a team. That’s one of the goals of that idea and the nut we’re trying to crack now.”

Another advantage of the team drivers is that on those nights when there are two drivers in a truck Katsam has an extra operator already at work that night. “So in case someone can’t make it in we don’t have to hustle and track someone down to get them. We already have someone there who can jump in a truck and get that route started with little delay,” Larko says.

Through attrition, however, this driver overlap system is on hiatus and the company now rotates on-call operators.

No More Donuts in the Parking Lot

Installation and monitoring of the Eagle Eye GPS system has helped Katsam in a number of ways, some involving cost control -- and some just plain control.

Nicholas monitors the GPS daily, and by keeping close tabs he can see if there’s something that needs further investigation. “I know what to look for and if something looks out of whack then I dig a little deeper to figure out why,” Nicholas says. “For example, if I see 140 minutes of nonproductive time on a route that raises a red flag.” He says that has happened several times but there have been good reasons for it – usually. “In a case like that it’s usually an equipment breakdown or something like that. It doesn’t necessarily mean they just sat there in the cab but it makes me look to see what was going on,” he says.

Helps Katsam control fuel costs because it monitors engine hours (primarily for maintenance purposes). “But if we see for example that the auxiliary engine ran for nine hours...well, they’re not sweeping the parking lot for nine hours. Turn the darn thing off!”

Drives preventive maintenance by tracking and tallying hours and miles that dictate when it’s time for certain maintenance.

Used as a training tool. Because the GPS tracks the sweeper’s route and speed it can be used to show a driver how to change his sweeping pattern (or prove to him Nicholas and Larko can tell when he’s doing donuts in the parking lot).

How to Control Sweeping Costs