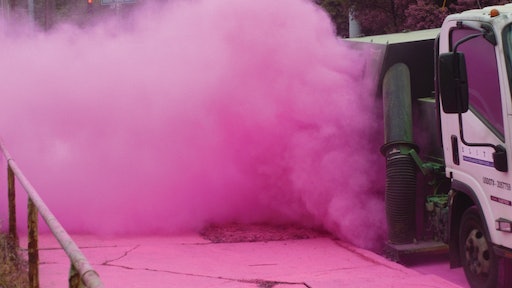 Initially, AC Sweepers used two regenerative air units to clean up the dust, but those units pushed the dust around rather than sucking it up. It soon became clear that it was necessary to use a unit that had a spray tank.

A new phenomenon has swept the country — the Color Run. People are participating in a 5K race that explodes with colors at various check points along the route. As runners hit the check points, volunteers throw a yellow, green, blue, purple or pink dust coating both the runner and the pavement.

Once the race is completed the area is left coated in a 3-4 inch layer of colored dust. The dust is a natural mixture of cornstarch and dye, and it is not harmful to the environment or water systems. Despite the safety of the mixture, extensive cleanup was required.

The Color Run organization contracted AC Sweepers & Maintenance, Inc., to complete the street cleanup after the Atlanta, GA, race this past April.

The original cleanup plans organized by the Color Run called for AC Sweepers to sweep the roads while Southeast Site Services was contracted to complete the cleanup of miscellaneous waste items such as cups and paper.

At noon, AC Sweepers began sweeping the streets while Southeast Site Services crews swept up the additional dust on the sidewalks. "The city of Atlanta was concerned with the color because aesthetically they didn't want the color to remain on the grass and trees," says Latasha Crenshaw, owner of AC Sweepers. "The ground crews used blowers to blow the dust off the sidewalk onto the street so the street sweeper could pick up the dust."

Around 2 p.m., Crenshaw received a call from the Color Run coordinator stating the ground crews had reached their work limit and workers were needed to relieve them. As a result, Crenshaw contacted a subcontractor to complete the rest of the hand-clean up.

A water supply was unavailable onsite, so crews used truck-mounted pressure washers to complete the cleanup of the sidewalks, lawns and trees in the area. Using 25 people and four pressure washers, crews completed roughly 80 percent of the hand clean up for the Color Run. "The subcontractor had its crews and a few pressure washers onsite until 10 p.m.," Crenshaw says. "We came back at 8 a.m. on Sunday after completing our regularly scheduled routes. My crew swept the area from 11 a.m. until 4 p.m."

Challenges of the fine dust

The Color Run was AC Sweepers' first experience working with such a fine material. The consistency of the material both dry and wet posed several challenges. However, AC Sweepers crews were able to use trial and error to successfully complete the cleanup of the site.

Whether sweeping dry or wet, AC Sweepers encountered several challenges with the fine dust. One challenge AC Sweepers crew encountered was the consistency of the dust. "The dust was so fine that it resulted in additional kick-up of material from pedestrians and traffic," Crenshaw says. Since the location was high-traffic, the fine dust was pushed around extensively by passing vehicles.

While sweeping the dust dry resulted in a high kick-up, sweeping the dust wet resulted in its own set of challenges. "When you use the water jets on the outside of the truck it created a worse situation because you're picking up the colored liquid and it then bleeds into the asphalt," Crenshaw says. "With a light rain, the material was even harder to cleanup because it stuck to the pavement."

In the beginning, Crenshaw used whatever sweeper unit was available. The first two units she used were regenerative air units. Due to the fineness of the material, the regenerative air units pushed the dust around rather than sucking it up. Ultimately, Crenshaw found the best success in the third unit that had a spray tank. "The regenerative units sucked the air in, because the dust was so fine it was blowing out the particles," Crenshaw says. "Having the water in the hopper helped minimize the kick-up of the dust."

Despite the challenges that occurred during the cleanup of the Color Run in Atlanta, Crenshaw gracefully maneuvered through to successfully cleanup the area. The Color Run organization and Atlanta city officials were so pleased with AC Sweepers' work that it received the cleaning contract for a second race in the Atlanta area.

For additional photos from the cleanup, go to www.forconstructionpros.com/10716535.