How to Educate a Community about Sweeping 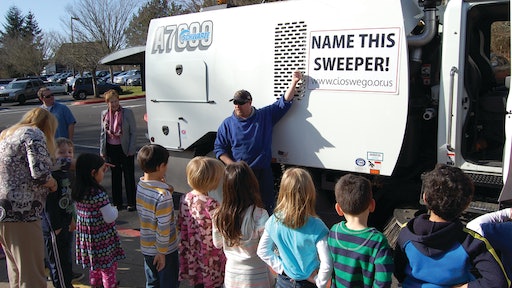 More than 200 students climbed in and out of the cab in one day, and more than 300 names were submitted for the sweeper.

Most residents of local communities might not be familiar with the work of street sweepers or the correlation between clean streets and quality water. After the City of Lake Oswego, OR, purchased a Schwarze A7 Tornado, plans were formulated to raise community awareness about the work the equipment completes.

The city decided to hold a coloring contest and a contest to name the new sweeper.

“We wanted to talk about a service we can all identify with, but one that we probably don’t know why we do it,” says Christine Kirk, public affairs manager for the City of Lake Oswego. “We all identify with keeping streets clean, removing leaves and rocks. I don’t know how many people know that we are also cleaning the streets to maintain quality water.”

Currently, Lake Oswego has three units that are 8, 9 and 12 years old with the one in needing most repair retiring this year. None of the sweepers have names. The new Schwarze unit is a regenerative sweeper with an 8.4 cubic-yard hopper. With a population of 37,000, Kirk says Lake Oswego’s sweepers cover a lot of ground during the year. She says the city’s stormwater management permit requires the city to sweep curb and gutter streets "at least four times a year and major arterial roads more than 12 times a year.”

Kirk developed a plan to inform the local residents of the new sweeper and the work it completes. “We held a naming contest and coloring contest with a coloring sheet developed by Schwarze,” she says. “The contest gave us a chance to talk about the role of the sweepers for five months in our publication, ‘HelloLO.’.”

The contests were also promoted through two school visits to educate the children about the equipment. “We had 200 students go in and out of the cab in one day,” Kirk says. “They were able to see the two steering wheels, and we also drove around the parking lot showing how the sweeper works.”

Kirk used several facts to help the students visualize the work of the sweepers. “Our three sweepers cover 6,400 miles of road a year,” she says. “They fill almost 16,000, 40-gallon lawn trash bags, and the new sweeper can collect 1,700 gallons of ice cream on each trip.”

The contest started with the name submission deadline of March 10. The city recieved more than 300 submissions -- split about fifty-fifty between children and adults -- including entries “Dirt Vador” and “Sweeping Beauty.” With so many entries and it being important that those that work with the sweepers feel comfortable with the name, the staff in public works department had the opportunity to vet the submissions making sure they were comfortable with them and that they were useable when communicating about the service.

Submissions were narrowed down to 10 names with the final community vote taking place in April to determine the three winning names that would be assigned to the new unit as well as the remaining two sweepers.

The contest has opened up the door for educating the community about the sweepers.

“The naming and coloring contests have helped give an identity to the sweepers,” Kirk says. “We hope to use the names and character more regularly in our communication. We want to convey how ratepayer dollars are use and what the staff and sweepers do and what we can all do to help them be more efficient. For example, we can better are communicate about cars, garbage cans and other things that get in the way as well as ways to keep debris from getting into our waterways.”

Voting took place in April and the sweeper names will be announced in May. Pavement will announce the winning names in its Blacktop Update e-newsletter.

Flexible properties supporting consistent adherence to pavement regardless of movement, ASTM compliant Mastic One is no ordinary mastic.
August 2, 2021
Follow Us