After two years of trials with the original design, the first motor sweeper was sold in April 1914 to the City of Boise, Idaho 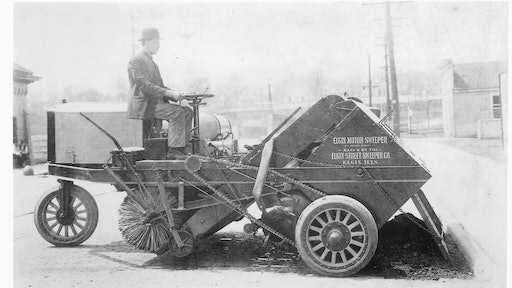 “Considering that very few American businesses can claim such a unique distinction, we are immensely proud of our 100-year milestone, as well as our legacy of innovation and industry leadership,” said Mike Higgins, Elgin Sweeper vice president and general manager. “Through two World Wars, the Great Depression and significant economic challenges in recent years, the ingenuity and steadfast commitment of Elgin Sweeper’s employees and dealer partners to serve our customers has been critical to our success.”

Driven by a desire to address the health hazards caused by streets and roads filled with filth and debris, pioneering automobile enthusiast John Murphy, who was a resident and alderman of the Elgin, IL, brought his design for the first mechanized sweeper to American Tower and Tank Company of Elgin. After two years of trials with the original design, the company was ready to go to market. The first motor sweeper, a three-wheeled machine, was sold in April 1914 to the City of Boise, ID. The company sold 15 sweepers in 1915 and 42 sweepers in 1917, the same year Elgin Corp. was established.

By 1922, the market for the Elgin sweeper was so promising that the owners of the Elgin Corporation terminated their relationship with American Tower and Tank Company and the company became the Elgin Street Sweeper Company. Years later, the company incorporated as Elgin Sweeper Company. In 1982, Elgin Sweeper was acquired by Federal Signal Corp., a leading global designer and manufacturer of products and total solutions that serve municipal, governmental, industrial and commercial customers. Today, Elgin Sweeper is a key brand of Federal Signal’s Environmental Solutions Group.

“Elgin Sweeper has certainly improved upon Mr. Murphy’s original sweeper design over the years, but his original concept of a street cleaning machine lives on,” Higgins said. “Some of the improvements made to the sweeper include the introduction of a gutter broom, expansion of the hopper capacity, use of a diesel engine and development of an integrally welded body to deliver unmatched strength and durability.”

This summer, Elgin Sweeper will host a special event for employees, guests and dignitaries to celebrate the company’s history. In addition an antique sweeper from Elgin Sweeper, manufactured in the 1930s, will be displayed at the company’s exhibit at the 2014 APWA International Public Works Congress & Expo this August in Toronto, Canada.