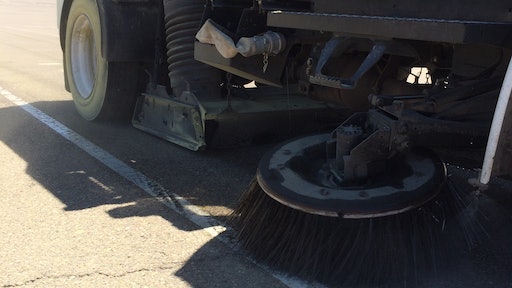 Pacific Sweeping's work with cities as an educational effort to assist the client than as a marketing ploy or sales pitch. Among the topics Pacific Sweeping might discuss with a city are new sweeping regulations, changes in equipment, sweeping frequency, routing, air quality management and storm water quality guidelines.

Lee Miller, president and CEO of Pacific Sweeping, a member of the North American Power Sweeping Association and the San Diego area’s exclusive 1-800-SWEEPER member, says there are two ways a city will buy street sweeping services. “The first method is low bid,” he says. “Most cities make their decision based on price and in that situation we put together a comprehensive proposal and we win some of those and we lose some of them. That’s just the nature of the business.”

He says the second approach municipalities take is to develop a request for proposal (RFP) in which the city seeks to make a buying decision based on “best value.” This RFP gives contractors an opportunity to develop a street sweeping plan customized for each city, and it’s where Pacific Sweeping shines.

“We have a higher success rate when we can be involved in an RFP than we do when pursuing low-bid contracts,” Miller says.

Started 45 years ago as Cannon Pacific Services, the company underwent a name change in 2013 to Pacific Sweeping to better convey the work the company actually does. With 48 employees and 35 sweeping trucks, Pacific Sweeping covers Southern California, serving more than 500 public and private customers. Miller says 80% of the company’s revenue is derived from sweeping for municipalities and 20% from site maintenance including parking lot sweeping, power washing, weed abatement and other general site services.

Miller, who has a degree in public administration and a certificate in entrepreneurial studies, years ago was overseeing public works departments for three California cities over a 15 year period, where he was involved with public works maintenance including street sweeping, asphalt repair and pavement marking among other services. He was responsible for writing the specs for in-house street sweeping and for outsourcing other work. “So I knew how to put together a set of specs based on the needs of the cities and various regulations,” he says. “When I came into this business in 2006 I brought that inside knowledge with me. That experience enabled me to work with cities and to help explain to them how their specs might be holding them back.”

“If it’s a new contract we’re bidding we have little, if any, influence over the specs,” Miller says. “But if it’s a contract we have or have had in the past we’ll reach out to them.”

He says Pacific Sweeping views this more as an educational effort to assist the client than as a marketing ploy or sales pitch. Among the topics Pacific Sweeping might discuss with a city are new sweeping regulations, changes in equipment, sweeping frequency, routing, air quality management and storm water quality guidelines.

“We let them know what we’re doing in surrounding cities, what’s working for those cities and -- probably as important -- why we’re doing what we’re doing for them,” he says. “Most cities are very open to that type of dialogue because most cities want to be on the cutting edge and up to date on industry trends and standards.”

Miller says the engagement with the city usually starts with a phone call if the contract hasn’t been let for bid, but if the city has already put out an RFP then Pacific Sweeping will pursue refining the specs through an e-mail so there’s a public record of the conversation.

Typically once Pacific Sweeping talks about specs with a city, the city will do a little research on its own to confirm what Pacific Sweeping has told them. Then, if the RFP is already out on the street, the city typically will issue an addendum changing the specs.

“At Pacific Sweeping, this process is a total team effort on our part,” Miller says. “Our operations team, business management team and sales team are all on the same page and if anyone hears something new in the industry we look into it to make sure we are ahead of the curve and can provide our customers with the most up to date information they need.”

“We were instrumental in alerting a number of our clients that they must include E-Verify in their bid new bid specs,” he says.

“Cities are always trying to stay on the cutting edge and be out front,” Miller says. “If they sign a 5-year contract, they likely won’t actively keep up with what’s happening in the sweeping industry because they don’t need to—that’s why they hired us. The only way for them to understand how the industry is changing is to rely on the contractor they hire to provide updated industry trends because that contractor is studying or tracking them.”

But he says cities don’t want to be the experts on street sweeping if they have outsourced their sweeping program.

“They want to know enough to hire the right person or the right company,” he says. “When a city hires services out it does that to get out of the day-to-day management of that operation. And when they do that they aren’t necessarily in tune with all the nuances anymore.”

Miller says the efforts Pacific Sweeping makes are not an effort to make more money off a contract. “It’s not about how much more money we can get it’s what wins the contract,” he says. “And the only way to win the contract is to be the lowest bid or be the best value. And we make sure we help them see what that best value involves.”

He says that the only time Pacific Sweeping might increase its bid is if the requirements of the city warrant it. He says, for example, that if the contract requires an additional piece of equipment or a unique tool they have to buy then that might impact the price. Also if any special training is required or if there are special restrictions they need to adhere to.

Getting to Know Pacific Sweeping in RFP

Miller says that another effort Pacific Sweeping makes when working with RFPs is to make sure the city knows as much as possible about his company. He says a city hiring a street sweeping contractor must take into consideration a variety of factors that many people don’t think about – but which Pacific Sweeping pays close attention to. He uses the comparison of hiring a waste hauler to make clear the impact.

“First, the city realizes that any trash-hauling company is going to touch every single home in town. It’s not like a paving contractor who paves in one area and then is gone,” Miller says. “The trash company is going to interface with every residence in the city and on a regular basis.”

He says the city knows that a waste hauling operation requires large, expensive equipment that will be representing the city, rolling through the streets, amidst traffic. Safety is important and image is important. “Equipment has to look good and employees have to look professional and they have to be knowledgeable,” he says.

“Street sweeping is very much like that,” Miller says. “The equipment is large, it’s expensive, and our operators are always driving around parked cars, on streets and among traffic. And we work throughout the entire city so all the residents and business owners see us daily, if not more frequently.”

Among the distinctions Pacific Sweeping highlights in an RFP are:

“So if my price is 2% higher than my competitor’s, but I’m local with a proven track record and I buy fuel and tires locally and many of my employees live within that city, that’s important for a city to know. We actually provide revenue for that city and that plays into the whole scoring process,” Miller says.

“I think most cities want a reputable company that has a positive image and a proven track record, so if you’re a company that demonstrates those distinctions, why not exploit them?”

Reporting on Every Curb Mile Swept

One service Pacific Sweeping provides cities is measuring and writing a report of every curb mile the contractor sweeps. Reports are developed for new contracts and every five years after that – more frequently if a city requests it.

“We measure every curb mile we sweep and we count the cars we drive around that are parked there. Then we present that information to the city so they can use the data to improve the sweeping effectiveness,” says Lee Miller, president and CEO of Pacific Sweeping.

“If we sweep one mile and there are 100 parked cars along that mile our operators are sweeping around those cars and not getting into the gutter. So what is our effectiveness rating on those streets? If we don’t let the city know about the cars parked on that street the city sees that we swept that one mile and they assume it’s clean. But it’s not as clean as they’d like it because of all the parked cars.”

Miller says that as a result of its reports, a number of cities have taken the information and put together formal posted “No Parking” routes which, while inconvenient to residents, results in cleaner sweeps.

When collecting this data Pacific Sweep assigns a second person to ride with the operator so they don’t slow down the sweeping rate. “On most contracts we’re compensated per mile swept so we don’t want to reduce our sweeping rate to collect that data,” Miller says. “There’s an incentive for us to sweep and maintain our schedule.”