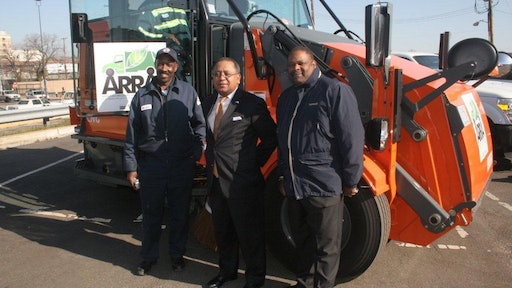 Pictured in front of one of the two Pelican CNG-fueled street sweepers are Gregory Harrelson, vehicle acquisition specialist, (left); Michael A. Carter, deputy director of public works (center); and Gerard Campbell, vehicle control officer (right), all with the District of Columbia.

“The vehicles we are putting into service symbolize our commitment to taking a Sustainable DC to the next level,” said D.C. Mayor Vincent C. Gray. “We have more than 1,400 alternative-fuel vehicles in our fleet, which is a 47-percent increase over 2010. By investing in heavy- and medium-duty vehicles that use alternative fuels, we will achieve a higher per-vehicle reduction in emissions.”

The alternative-fueled, single-engine Pelican is powered by the ultra-low emissions Cummins B5.9-195G engine that is certified to U.S. EPA and CARB standards and Euro V and EEV. The engine offers low emissions without sacrificing performance and efficiency.

A clear, odorless, and non-corrosive gas, CNG has become an ideal energy source for the future. LNG is an alternative fuel that is economical, abundant in supply and produces approximately 10 percent of the pollutants normally emitted by traditional gasoline or diesel engines. LPG, or propane, is a low-emission, economic and easily used fuel with a long and varied history in transportation applications since its inception as a motor vehicle fuel. Vehicles powered by CNG, LNG and LPG are used in a wide variety of commercial applications, including light-duty trucks and sedans, medium-duty trucks, and heavy-duty vehicles like sweepers, refuse haulers and transit buses.