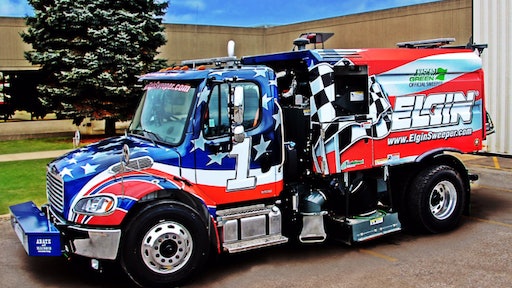 Elgin Sweeper has renewed its partnership with NASCAR Green™ for three years and will continue to serve as the Official Sweeper of NASCAR Green.

“Elgin Sweeper has provided trackside support for NASCAR for more than 15 years. Since we entered into our NASCAR Green partnership four years ago, we have experienced incredible success,” said Mike Higgins, vice president and general manager of Elgin Sweeper. “Our company shares NASCAR’s passion for, and commitment to, protecting the environment through sustainable practices.”

“For years, most racetracks borrowed a local street sweeper, or used a small machine designed for sweeping parking lots,” Higgins said. “As the Official Sweeper of NASCAR Green, Elgin Sweeper has raised the bar in terms of racetrack sweeping, drying and conditioning, mitigating dust left behind from absorbent products used to clean fuel spills on the track, and removing rubber and debris in and around the pit area.”

In 2016, the Elgin Track Sweeper helped with drying rain-soaked tracks and vacuuming up standing water, rubber and debris around the pit area at 76 races of the National Series and more than 200 National Series practice sessions.

“Based on our Crosswind GRS unit used to vacuum liquid glycol from airport runways, the Elgin Track Sweeper includes unique technology features developed specifically for a racetrack setting,” said James Crockett, product manager at Elgin Sweeper. “These features include a thermal imaging camera that helps the operator locate liquids that may be camouflaged from the naked eye; a side air-blast nozzle capable of moving air at 270 mph for locations such as grass on the inside field, pit areas and weepers; a reverse sweep system equipped with radar; a 20,000 CFM-rated fan; a hydraulically-driven side broom with plastic bristles; and a soft-wall attachment to vacuum out behind the cracks on the racetrack and the soft wall before and after each race.”

By speeding up the time it takes to clean and dry the track, the Elgin Track Sweeper assists the overall process of keeping the race event on schedule,” Crockett said. “By doing so, the overall operations energy usage around the track – electricity used in the suites, media centers and lighting systems – is also significantly reduced.”

Crockett added that the powerful and effective technology incorporated in the Elgin Track Sweeper has been used in sweepers purchased globally by military customers to help keep their respective air force and navy runways clean of debris.

The company’s proprietary shared technology system diverts the formerly wasted energy from the sweeper’s chassis engine back to power the Elgin Track Sweeper itself. “This technology offsets about 16 metric tons of carbon dioxide being put into the environment over the course of a full NASCAR season, which is the equivalent of planting 372 new tree seedlings,” Crockett said.

Elgin Track Sweeper by the numbers