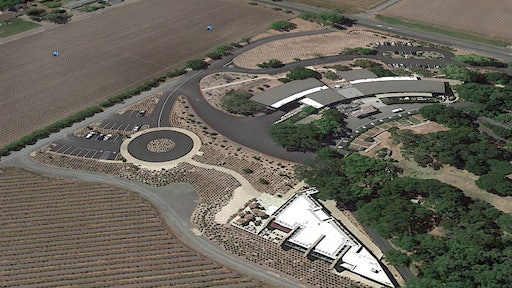 Positioned seven miles north of Napa on the valley's eastern side, Stag’s Leap Wine Cellars is located on a 240-acre estate with 90 acres of vineyards. Stag's Leap produces award winning vintage wines and has been growing successfully over the years, acquiring other neighboring vineyards. Stag’s Leap has become a go-to destination for the wine elite and hoards of tourists, all wanting to see where some of the very best wine in the world is produced. To better accommodate guests, the winery needed a larger, multi-use facility for tastings, education and business meetings.

Winery management wanted a site for the new $7 million visitor facility that would awe visitors as much as they hope their wine does. The selected site is on the northeast corner of the estate and perched on the side of a hill. It provides vista views of the expansive rows of grape vines, the land and the dramatic Stag’s Leap rock formation as a backdrop — in essence, a stunning view of the terroir. A vineyard is often characterized by its terroir, a French term loosely translating as "a sense of place" that refers to the specific geographical and geological characteristics of grapevine plantations, which help form the unique character of the wine. 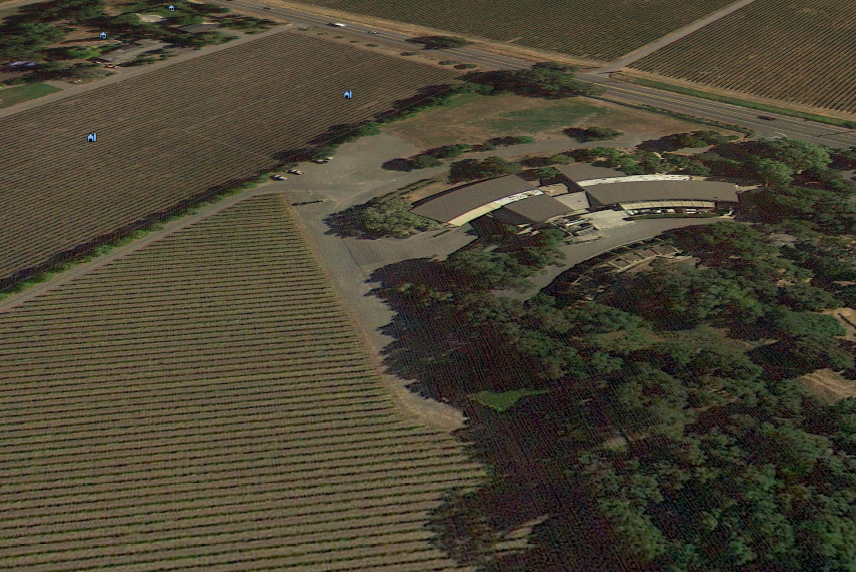 Google Earth view of Stag's Leap winery prior to construction of the new visitor's center.

Google Earth view of Stag's Leap winery prior to construction of the new visitor's center.

Choosing the site for the new visitor center launched nine months of planning, engineering and design required before site preparation could commence for a structure that would be built on a constructed ledge that essentially extended the hill that houses a network of man-made caves which have been used for years as cool temperature storage.

“This is a complicated and complex project,” states Bill Kopling, 3D modeler and takeoff technician with John Benward Company Inc., Sonoma, Calif. “We knew that success on the project depends on accurate cost estimates based on detailed, digital plans for stripping, grubbing, cut and fill, and structural fill placement.”

Founded in 1979, John Benward Company is a Class A general engineering contractor firm providing all forms of site preparation for construction projects in the San Francisco North Bay Area — serving Sonoma, Napa, Northern Marin and Solano Counties. A specialty area is wineries. The company has extensive experience and a notable reputation within the California wine industry.

For Benward Company, the project included site prep for a new visitors center, a roadway leading in, and two parking areas — one for 25 cars and an overflow area, which can accommodate two buses. 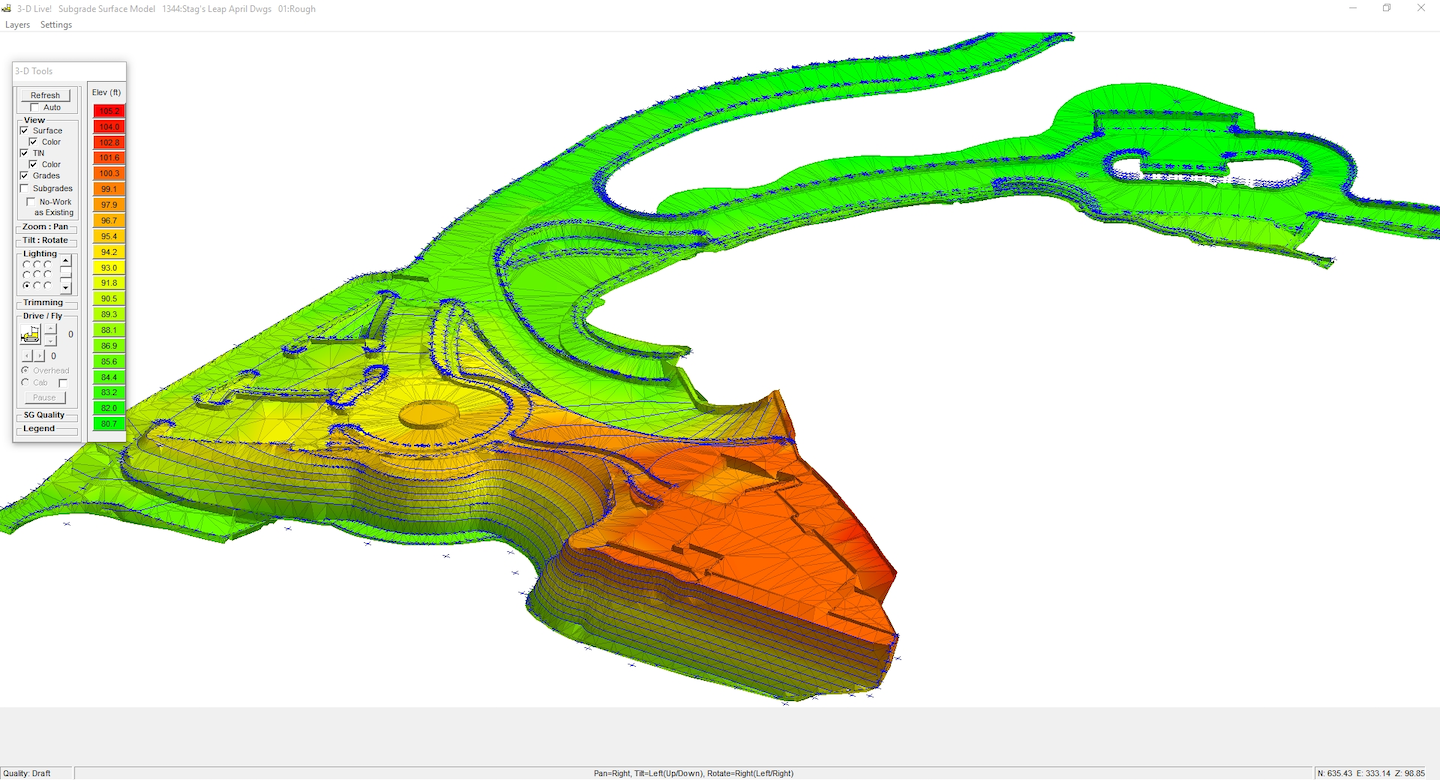 Contractor Benward Company had to extend the site plateau using 22,000 cu. yds. of approved "select" fill that met the project's geotechnical requirements.The big challenge was to extend the site plateau 125 feet (150 feet on the toe end) by adding 22,000 cubic yards of approved “select” fill with plasticity index of 15 or lower to meet the geotechnical requirements set by the project’s engineering firm. The building pad extension is adjacent to the network of man-made tunnels. On the site were 1,200 cubic yards of cave tailings from boring activities to create the cave network that remained when the caves were built.

To extend the site plateau and ensure fill stability for the new visitor center would require construction of a keyway at the base and a series of four benches measuring four-feet high by 12-feet wide for the length of the fill plateau.

“We used SiteWorks software from InSite to calculate exact take-off and fill quantities and utility quantities for the Stag’s Leap project,” says Kopling. “The software produces graphical construction layouts which helped us explain our cost estimates and provide visual imagery to help quantify the work necessary to create the project.”

During the planning and design phase of the project there were numerous changes and refinements to the construction plan. Benward Company was able to adjust quantities and its cost estimates each time with InSite SiteWorks earthwork and utility estimating software. 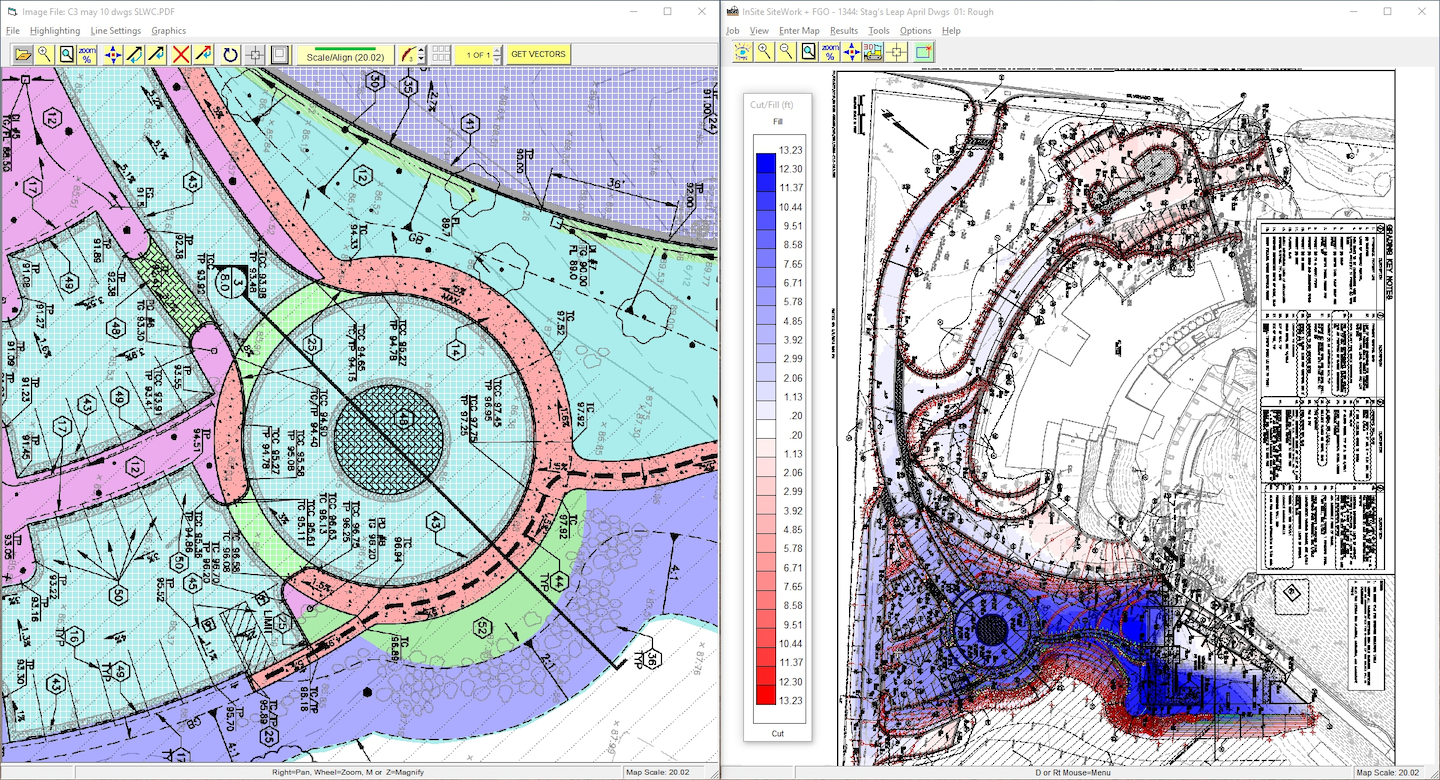 InSite SiteWorks produced graphical construction layouts, allowing the contractor to explain cost estimates and provide visual imagery to quantify necessary work.One time the winery’s design team made some major changes and Stag’s Leap management wanted to see updated costs for the next budget round due in a few days. Kopling states. “It was a lot of work and I literally had about 16 hours to produce everything to a very detailed level. Plus, I had a personal priority at the time — my wife was recovering from brain surgery. InSite SiteWorks is so powerful and easy to work with that I was able to do all the data input and modeling with her near my side, so I could address her convalescing needs. That wasn’t the best situation, but I got to tell you that the software helped me pull a rabbit out of the hat that day.”

The software’s overlay feature accommodated updates to the subgrade and provided 3D views of the site as it developed.

“InSite SiteWorks software helped us win the job. It also helped Benward Company, the general contractor, and the Stag’s Leap facilities management considerably with its pre-construction planning and budgeting,”  Kopling says. “A key benefit is that it helped us explore options that without it can be cumbersome and time consuming to complete.”

In looking back on the project, Kopling had this to say: “We’re proud to have helped Stag’s Leap Wine Cellars produce an absolutely stunning visitor center. They are truly good folks and deserve a facility as good as the wine they produce. And I’ll always remember how the InSite software helped us win the project and made it possible for me to be with my wife during a critical time. I know we’re supposed to keep our personal lives separate from the business, but there are exceptions… and in this instance my exceptional wife deserved my attention. This software allowed me to juggle several high priorities in my life without having to make a decision on only one. The portability of the software as well as a very understanding boss made this all possible.”

Jeff Winke is a business and construction writer based in Milwaukee, Wis. He can be reached through jeff_winke@yahoo.com.

10 Summer Construction Safety Tips — For You and Your Equipment

Summer’s a busy season for construction sites with no time for downtime. These safety tips will help keep your team and equipment healthy, safe and on the job.
Lonnie Fritz
July 15, 2020

Business Owners Have to Focus Priorities to Have a Successful Company

If you put long-term priorities first and focus on what will give you the biggest return on energy, you’ll have lots of time for the important things in your business and personal life.
George Hedley
June 17, 2020

Even if you’ve only seen a slight decline in your business income due to COVID-19, it pays to check into these relief programs and the traditional loans available to small businesses.
Caterpillar - Cat
June 8, 2020

Filing proper liens is critical to keep the process from backfiring on the contractor and having a lien declared fraudulent.
June 10, 2020

There’s a “new normal” for hiring and onboarding these days. Try out these five tips if you're looking to hire.
Caterpillar - Cat
June 8, 2020

Most companies stop growing when the business owner reaches their maximum level of what they can do themselves, micromanage, supervise, and control.
George Hedley
June 3, 2020