Cloud software drives growth by creating one source of up-to-date information for the entire company, presiding over a 2.5% gain in profit for the general contractor 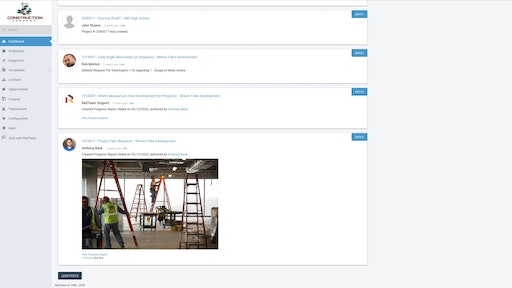 Anthony & Son’s General Contractors Inc. (ASI) is growing without increasing staff thanks to efficiencies gained with software that integrates all aspects of the company under one umbrella.

“The first thing we noticed when we started using RedTeam is how much time it was saving us and that time savings allowed the company to grow without hiring new staff,” says Joel Anzelc, vice president of the 20-employee general contractor based in West Sacramento, Calif. “We were inefficient before using RedTeam. We went from scanning documents and uploading it to our servers to pushing something to the cloud with the touch of a button.”

Having all the correct information at your fingertips saves a lot of time. The RedTeam online plan room is great at eliminating rework and downtime caused by having incorrect or outdated information. For example, before using RedTeam, on one ASI project, an architect had responded to a concern by the city in which the project was located and made plan check changes but didn’t tell ASI or the owner. So, the plans that were on site and in the RedTeam plan room were different from the plan check set.

“We discovered that there were two sets of plans after one week of work when the architect responded to a request for information from a subcontractor and realized we didn’t have their most current set of plans,” says Anzelc. “Having a plan room that gives all parties access to the most recent plans and changes avoids scenarios like this from happening.”

Anzelc also says communication is greatly improved. Subcontractors can easily communicate with architects to resolve issues. You can see who has opened an email. If someone hasn’t opened it, you can call them to make sure they get the information. By improving communication, decisions get made sooner and issues are resolved more quickly and the company saves time by avoiding downtime and rework.

Anzelc also credits the software’s ability to easily integrate with other key software, such as PlanGrid, Docusign and QuickBooks, as well as the elimination of local servers, as other time-saving and profit-enhancing features of using the software. “Our company has seen a 2.5% gain in profit since using RedTeam,” he says.

Anzelc says the company wanted a software that would integrate everything into one place, so they could see cash flow, project status, schedules, each department’s activity and more from a single source. “With RedTeam, we can see what is happening across the entire company with the click of a button,” says Anzelc.

Having a single source for information that is cloud based allows for employees to work virtually anywhere at any time and still be connected to the rest of the team and to have current and correct information at their fingertips.

“It is critical to have something anyone can use at any time and to have all information and tasks under one umbrella,” says Anzelc. Before RedTeam, project management was by itself, accounting was by itself, estimating was by itself and field systems were by themselves. Estimators and project managers would update budgets to accounting on a monthly basis and they would ask them what was being billed, because they didn’t have a clear view of the progress of projects.

“The biggest benefit for us is that we can see what is happening on our projects on a daily basis,” says Anzelc. “If there is an issue, we can document it. By being able to document issues from the field and to be able to instantly communicate the issue to all relevant parties, the company can resolve issues more quickly, decrease downtime, and save money. Having the most current plans in the field decreases rework, thereby saving time and money.”

One software – many solutions

Switching to RedTeam not only improved efficiencies and processes that affected the entire company, such as improved communication and moving all documentation to the cloud, but it also provided specific department benefits.

“Each area of RedTeam improved every area of our company from accounting to equipment to estimating to contract management to project management to safety,” says Anzelc. For example, when putting together an estimate, it tracks all the emails sent to subcontractors with metadata so you know who received and opened the bid invites. The subcontractors can confirm they are bidding and then upload their bids right into RedTeam, and you are notified as they do so you know when the bids are coming in.

The app also allows ASI to make sure all safety aspects of a job are covered. The ability to input pictures and safety report documentation directly into progress reports allows companies to see job sites in real-time. Which, in turn, will enable them to correct any safety issues or concerns. The integration of RedTeam with QuickBooks online has saved ASI considerable time with month-end reporting, cost accounting and financial statement preparation.

“From accounting to estimating to project management, RedTeam has saved time, improved processes and increased profits across the board.”